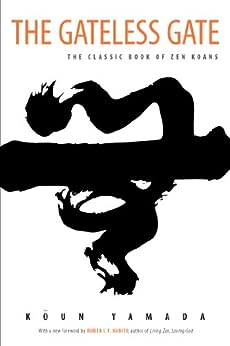 Koans are the intimate family history of Zen. The awakened mind of the Zen ancestors is conveyed, but also their effort, sweat, pain, and joy. Koun Yamada's excellent translation and commentary helped opened the door to this world for many of us, and this new edition is sure to do so for many more..--Kyogen Carlson, Dharma Rain

Koun Yamada Roshi played a seminal role in spreading Zen Buddhism from Japan to the West. His insightful and profound commentaries on the Gateless Gate arise from his deep understanding of the Buddha-Dharma. They will help Zen students of all abilities to appreciate the significance of koans, not as paradoxical riddles, but as touchstones of reality.--Gerry Shishin Wick Roshi

Koun Yamada's superb translation of The Gateless Gate has accompanied me throughout my practice and my teaching ever since the first edition appeared over two decades ago. His teisho on the Cases are alive and pithy, directly conveying Master Mumon's vivid Zen and the life-transforming words of our ancestral teachers. How fortunate we are to have this new edition, with a Foreword by the esteemed Ruben Habito.--Roko Sherry Chayat, Abbot, Zen Center of Syracuse Hoen-ji

The penetrating voice of a unique lay Zen master! The depth of Yamada Koun Roshi's insight doesn't allow him to keep any religious, cultural or racial border in his heart. Consequently many westerners as well as catholic fathers and sisters joined his sangha. Reading his words, we realize that the Dharma has nothing to do with east or west, Buddhism or Christiany. Buddha nature is universal.--Eido Shimano Roshi, Abbot of Dai Bosatsu Zendo, Kongo-Ji

This is an essential reference book for everyone working on koans, and an inspiring window on Zen practice for those who are not.--David Loy, author of The Great Awakening: A Buddhist Social Theory

Yamada Koun was of that fine old breed of Japanese Zen Masters- piercing, disciplined, and always on point. 'The Gateless Gate' distills his teaching and spirit marvelously. It is an essential text for anyone interested in the Zen koan, and in the process of Zen awakening. --Norman Fischer, former abbot, San Francisco Zen Center, teacher and founder Everyday Zen Foundation. Author of Taking Our Places: the Buddhist Path to Truly Growing Up.

Yamada Roshi's straightforward commentary on the Wu-men kuan (Mumonkan) is again available in this new edition, and I'm delighted. As his Dharma heir, his teachings are my own, as they are for his many other successors in the Americas, Europe, and Asia. Now our students and a new generation of Zen students everywhere can benefit directly from his guidance. I'm very grateful.--Robert Aitken, author of Taking the Path of Zen, and Zen Master Raven --This text refers to the paperback edition.

Koun Yamada became a dharma successor to the renowned Zen master Haku'un Yasutani while maintaining a prominent career in business and public health. He guided the Zen practice of many students including a large number of Roman Catholic priests, monks, and nuns.

A former Jesuit priest, Ruben L.F. Habito is professor of world religions and spirituality at Perkins School of Theology, Southern Methodist University, and resident teacher at Maria Kannon Zen Center in Dallas, Texas. A dharma heir of Yamada Koun, he is also the author of Healing Breath and other works in Japanese and English. --This text refers to the paperback edition.

4.6 out of 5 stars
4.6 out of 5
127 global ratings
How are ratings calculated?
To calculate the overall star rating and percentage breakdown by star, we don’t use a simple average. Instead, our system considers things like how recent a review is and if the reviewer bought the item on Amazon. It also analyses reviews to verify trustworthiness.

Andre Fisher
5.0 out of 5 stars A true insight into what is ZEN
Reviewed in the United Kingdom on 14 May 2018
Verified Purchase
Reading a chapter a day. Some goes well over my head. Some hits home. All makes me ponder.
Read more
Report abuse

Blueflame
4.0 out of 5 stars A very deep book
Reviewed in the United Kingdom on 22 November 2010
Verified Purchase
The Koans in this book are quite deep to understand.
It takes time and a lot of work understanding the art of Koans.
Read more
6 people found this helpful
Report abuse

Leif
1.0 out of 5 stars Not a great representation of Zen.
Reviewed in the United States on 21 June 2018
Verified Purchase
The extensive commentary betrays the core philosophy in several ways; first by (without a shred of irony) attempting to explain concepts that by their own admission cannot be made clearer through explanation; second by focusing on humanistic and even hedonistic interpretations of the value of Zen. It waters down the state it describes as "marvelous enlightenment" into something pleasurable, desirable - and ironically, misleads the reader from the path that might lead them to it. One cannot become Zen while anticipating a reward for it.

If you can instead find a collection of koans which merely begins with a brief description of how to meditate on them, rather than a lengthy disassembly of each one, I would recommend that instead. This will not help you on your journey.
Read more
54 people found this helpful
Report abuse

Amazon Customer
4.0 out of 5 stars Very helpful for beginners.
Reviewed in the United States on 17 July 2021
Verified Purchase
I knew nothing about Zen or Buddhism before reading this book. The breakdown of each koan is very helpful. It is like watching a grandmaster play chess and explain the reason for each and every move he makes. At the outset the koans seem like incomprehensible pieces of fine literary work. About quarter of the way through the book things start to click and make sense. I'm very happy I bought this book and plan rereading it then buying the blue cliff records next. I give the book 4 stars because there should be a better description of how each case is set up and explained along with its respective commentary however, the content is priceless.
Read more
Report abuse

Gary Crickmore
5.0 out of 5 stars I enjoyed reading the 48 stories that do not make sense ...
Reviewed in the United States on 29 January 2016
Verified Purchase
I enjoyed reading the 48 stories that do not make sense spoken by highly intelligent people. There is a point to all of them and it is helpful that there is commentary by multiple people after each one. They all were told hundreds of years ago so I found it impossible to have the aha moment with all but a couple of the stories. You should come away from reading this wiser and better able to problem solve in your everyday life. Highly recommended.
Read more
11 people found this helpful
Report abuse
See all reviews
Back to top
Get to Know Us
Make Money with Us
Let Us Help You
And don't forget:
© 1996-2021, Amazon.com, Inc. or its affiliates