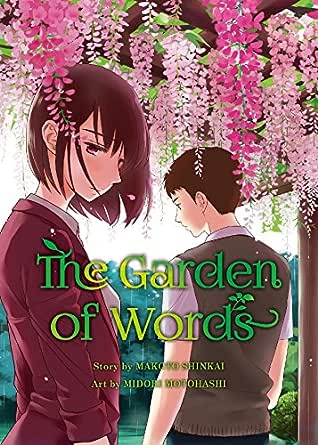 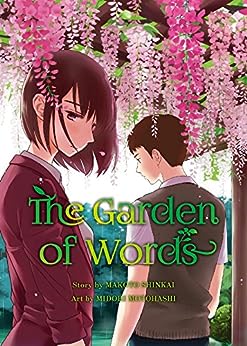 The Garden of Words Kindle Edition

From the award-winning director and author Makoto Shinkai comes the comic adaptation of his most recent work. A modern day love store built on forbidden romance, Shinkai weaves another heartfelt tale that should appeal to his large existing fan-base while winning over more readers for years to come.

Can a poem save your life? Words are powerful. Insults and rumors can derail a career; a bit of encouragement can give someone the strength to pursue their dreams. When a high school boy skipping class to sketch shoe designs and a taciturn woman drinking a morning beer meet in a Tokyo park, they say little, but the woman bids farewell with an ancient tanka poem. Will the boy figure out the poem’s meaning—and its corresponding response—before it’s too late?
See all Product description
click to open popover

Mathew A. Shember
5.0 out of 5 stars As good as the movie; maybe better.
4 February 2018 - Published on Amazon.com
Verified Purchase
I first saw the movie and become an instant fan. Makoto Shinkai has been declared Miyazaki's heir and you can see this by the way he does his scenery. Especially impressive was a short of real life scenes compared to what was in the movie.

I didn't know this manga was in print and of course had to obtain it.

Overall, it follows the movie pretty well. Some differences but it's pretty close. We of course start with Takao skipping first period as he likes to do when it rains. He loves a gazebo in a park. This time he happens on Ms. Yakino who is also ditching work. She is an interesting woman as she is drinking beer and eating chocolate. A warning sign that a woman is having a bad day. But a teenager would not know this. He does his usual of drawing shoes and starts using her feet and shoes for ideas. He of course tries to be secret about it. Over time they start becoming friends. Sharing food and talking. She starts eating normal and stops having her morning beer and chocolate. He has more confidence in this quest. There is an age difference and it all goes comes to a confrontation and a resolution.

As I liked the movie; I liked this printed version. Midori Motohashi is the artist and there is a few addons at the end. I did like how Takao became fascinated with shoes. Sort of bitter sweet. I did like the addons as it added more. I wanted more at the end of the story and this gave a little more insight especially a drawing of Takao and Ms. Yakino.

Kevin
5.0 out of 5 stars This Manga Struck Me Like 'A Clap of Thunder...'
8 December 2014 - Published on Amazon.com
Verified Purchase
This manga brings one of Makoto Shinkai's latest and most beautful masterpieces into a brand new form. While the character designs may look different from what you may have seen in his film but the designs and illustrations done by Midori Motohashi fit perfect into the manga's own work. One great thing about the manga is how it is able to go more in depth to the film as if the viewer is discovering deleted scenes never before put into the movie. On one note some of the wording and placement might seem a bit off at first even for those who are experience in reading manga, but once you get used to this fresh style of manga writing you are in for a ride. The ending of the story also has cute mini-comic that I liked and thought was a nice touch. I truly enjoyed reading this manga and was able to feel it come to life as I continued to read which made it feel all as much as real to me. This one is truly a title worth being in any manga fan's collection!

A.J. Fewkes
4.0 out of 5 stars Good representation of the film
9 December 2017 - Published on Amazon.com
Verified Purchase
The Manga artist here does a phenomenal job of depicting Shinkai's work. While this romantic pairing is a little unorthodox, it speaks to the powerful loneliness many of us feel in our own hearts. It's a decent representation of the film, but in all honesty reading this story instead of watching it feels a little hollow without the music.
Read more
One person found this helpful

Maxdaddy
5.0 out of 5 stars A bit bittersweet, a bit melancholy, a lot of longing...
11 June 2018 - Published on Amazon.com
Verified Purchase
A story that reminds me of how it felt to fall in love for the first time. The artwork fills in the gaps and elevates the dialogue reminding me of the beauty of a glance, the sensuousness of a gesture, and how such simple innocuous things can make the heart sing.
Read more
2 people found this helpful

Johanna DC
4.0 out of 5 stars Creates a poetic mood of inspiration
3 January 2015 - Published on Amazon.com
Verified Purchase
A boy in his first year of high school takes shelter on days when it rains in a park gazebo. He sketches shoes and dreams of being a designer of ladies' footwear. His family is moving apart without him, with his mother spending her time with a younger boyfriend and his big brother moving in with his girlfriend.

On those mornings when he goes to the park, he has company -- an older woman playing hooky from work who drinks beer and eats chocolate in the shelter. They strike up a conversation, and he finds himself able to share things with her no one else in his life wants to hear. She seems intrigued by someone who's still got future choices ahead of him, as a way of escaping her own worries.

Either that description intrigues you, or you're thinking, "and? what do they DO?" If the latter better fits you, I don't think this is the story for you, because I found the appeal of The Garden of Words to be in its creation of mood. The events it portrays are necessarily transitory, with its pages capturing life-changing moments bound to end. The two, mismatched as they are, find inspiration in each other temporarily. I found myself thinking about people I'd barely known who still had an influence on my life, about being open to interactions with other people, about how memories become connected to places and moments and elements like the weather.

The one thing that occasionally marred my entering into the poetic dream was the lettering. It's computerized, and there are times when the words don't fit the original balloons, bumping up against the edges or parsed into breaks that don't match English phrasing. It doesn't aim for elegance the same way the other elements of the book do.

The Garden of Words is a lovely stand-alone story that I suspect one can come to at different times in one's life and find different sympathies and resonances. It's a good read whether or not you've seen the anime. (Review originally posted at ComicsWorthReading.com.)
Read more
11 people found this helpful
Go to Amazon.com to see all 38 reviews 4.6 out of 5 stars
Get FREE delivery with Amazon Prime
Prime members enjoy FREE Delivery and exclusive access to movies, TV shows, music, Kindle e-books, Twitch Prime, and more.
> Get Started
Back to top
Get to Know Us
Make Money with Us
Let Us Help You
And don't forget:
© 1996-2020, Amazon.com, Inc. or its affiliates