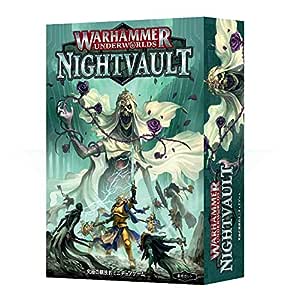 Sam R
5.0 out of 5 stars A very fun, tactical board game
30 December 2018 - Published on Amazon.com
Verified Purchase
Nightvault is a tactical miniature combat game that pits two warbands of fighters against each other in a ruined, haunted city. If you're familiar with skirmish games like Mordheim or 40k Kill Team, it's a bit similar to those, except the game is played on a board rather than a tabletop. I think that this is a plus, since it makes the game more portable and more accessible to newer players who aren't familiar with tabletop gaming.

You can perform one of a number of actions on your turn, like moving or casting spells with a single figure, and in between turns players have the opportunity to play power cards that can have a huge impact on the course of the game. Thus, deck building and clever card usage is a pretty key part of this game (this box comes with a number of extra cards, and more cards come with each warband expansion). These cards, combined with the restrictions on how many times a fighter may move or attack, leads to a game that is very tactical and requires a lot of thought and foresight.

The game's rules aren't exactly what I would call "intuitive" but I think that they are relatively simple and easy to learn. You could teach somebody how to play this game pretty easily, but I think that that person wouldn't really start to have fun with the game until they really wrap their head around how it works, so hopefully whoever you plan to play this with has the patience for that sort of thing. This is the kind of game that you could whip out casually every now and then, but it works best when both players really know and understand both the game and their warbands inside and out. For me, the best and most surprising part of Nightvault was how thematic each of the Warbands feels to play. The Warhammer theme isn't just window dressing, it really comes through in the gameplay.

The components of this game are pretty high quality. The highlight of the box is of course the miniatures, and they're pretty great. You get Stormsire's Cursebreakers, a group of three Stormcast Eternals who specialize in sorcery, and The Thorns of the Briar Queen, a host of ghastly Nighthaunt ghosts. The models are all snap-fit, so you theoretically don't need glue to assemble these, but I would definitely keep some on hand. You'll also definitely need a good set of snips.

The Nighthaunt models in this set are some of the most finely detailed and fragile models that GW has ever produced, and it's frankly a miracle that they were able to make them work as push fit models. They look great when finished (The Briar Queen in particular is one of the very best models that GW has ever produced IMO) but they require a lot of patience and the proper tools to assemble without mishap. The Stormcast are easier to put together, although parts of their assembly can also be a bit difficult.

The dice, game boards, and tokens are also pretty high quality and are made from nice, durable materials.

Overall, I highly recommend this game provided that you have another person that would be willing to make the time commitment to learn how to properly play it with you, since that's how you'll get the most fun out of Nightvault. Casually it's fine, although I could see people who have never played any sort of wargame before being completely turned off by this game.
Read more
5 people found this helpful

Mickey Lei
5.0 out of 5 stars Fun for beginners.
18 February 2019 - Published on Amazon.com
Verified Purchase
I am into board games (I have runebound, a bunch of D&D board games, and massive darkness) but, I have never tried a Warhammer game where you assemble your miniatures. I was never into the combat squad based tactical war games because no board. This is the perfect way to get into Warhammer because it is not as expensive as their other games, you get to assemble some minis(really incredible designs), and it's a streamlined version of their main games. Die-hards are probably like ehh i'll pass, but if your an rpg or board games fan that wants to try something new than this is perfect.
Read more
One person found this helpful

Amazon Customer
3.0 out of 5 stars very fun addition but the "easy" sprews need work
7 October 2018 - Published on Amazon.com
Verified Purchase
the only thing i didnt like is that the sprew for the chain rasps had alot of fragile pieces connected in bad ways. mine arrived with a candle holding arm broken off. took two hours to glue it back on good enough. maybe this is just me but its 2018 cant we do away with the sprews yet lol. games super fun though.
Read more
2 people found this helpful

James
5.0 out of 5 stars Are you ready for the carnage?
8 July 2019 - Published on Amazon.com
Verified Purchase
Warhammer Nightvault is a great game if you’re not wanting to go all in on 40K / great price - fast shipping and no damage / Already painted up 2 warbands and played. Sturdy box and they even include extra plastic bags for tokens. Totally recommend for the money.
Read more
One person found this helpful

Alex
4.0 out of 5 stars Fun cmgame beautiful models!
28 May 2019 - Published on Amazon.com
Verified Purchase
Great except for a deepish scratvh in the board where the pieces dug into the board during shipment! Thry should put a little piece of of protective paper against the sprue with the sharp bits.

Fun game! The rules are complicated so I reccomend playing the tutorial first. Models are some of the coolest- the briar queen especially.
Read more
One person found this helpful
Go to Amazon.com to see all 13 reviews 3.9 out of 5 stars
Get FREE delivery with Amazon Prime
Prime members enjoy FREE Delivery and exclusive access to movies, TV shows, music, Kindle e-books, Twitch Prime, and more.
> Get Started
Back to top
Get to Know Us
Make Money with Us
Let Us Help You
And don't forget:
© 1996-2020, Amazon.com, Inc. or its affiliates