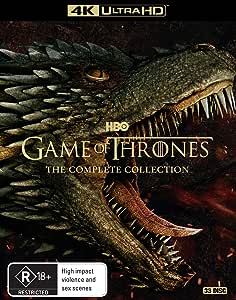 For the great families of Westeros, violence, deception and treachery--all for control of the Iron Throne--have played out in epic fashion over the course of eight exhilarating seasons. This series follows the driven inhabitants of this visionary world as their personal quests soon converge with the arrival of a common threat from the North: a seemingly unstoppable Army of the Dead. "When you play the Game of thrones, you win...or you die". SEASON 1: Summers span decades and winters can last a lifetime. From the scheming South and the savage eastern lands, to the frozen north and ancient Wall that protects the realm from the mysterious darkness beyond, the powerful families of the Seven Kingdoms are locked in a battle for the Iron throne. This is a story of duplicity and treachery, nobility and honour, conquest and triumph. In the Game of Thrones, you either win or you die. SEASON 2: As winter approaches, the cruel young Joffrey sits upon the Throne in King's Landing, counselled by his conniving mother Cersei and his uncle Tyrion, who has been appointed the new Hand of the king. But the Lannister hold on power is under assault on many fronts, with two Baratheons donning crowns and Robb Stark fighting as the King in the North. In the meantime, a new leader is rising among the wildlings north of the Wall, adding new perils for Jon Snow and the Night's Watch, while Daenerys Targaryen looks to shore up her depleted power in the East with her three new-born dragons. SEASON 3: The Lannister's barely hold on to the throne after a savage naval onslaught from Stannis Baratheon, while stirrings in the north threaten to alter the overall balance of power. Robb Stark, King in the North, faces major calamity in his efforts to build on his victories over the Lannister's while beyond the Wall, Mance Rayder and his huge army of wildlings continue their inexorable march south. Across the Narrow Sea, Daenerys Targaryen--reunited with her three fast-maturing dragons--attempts to raise an army to sail with her from Essos, in hopes of eventually claiming the Iron Throne. SEASON 4: The Lannisters' control over the Iron Throne remains intact, but can they survive their own egos as well as the ongoing threats around them? While an unshaken Stannis Baratheon continues to rebuild his army on Dragonstone, a more immediate danger comes from the south, as Oberyn Martell, the Lannister-loathing "Red Viper of Dorne", arrives at King's Landing to attend Joffrey's wedding. At the Wall, the Night's Watch seems over-matched against Mance Rayder's advancing army of wildlings, which in turn is being trailed by an even more formidable foe. What's more, Daenerys Targaryen, accompanied by her fierce trio of dragons and an Unsullied army, is poised to "liberate" Meereen, the largest Slaver City in the east, which could provide her with an imposing force to execute her ultimate plan of reclaiming the Iron Throne for her family. SEASON 5: At Castle Black, Jon Snow struggles to balance the demands of the Night's Watch with those of newly-arrived Stannis Baratheon, who styles himself the rightful King of Westeros. Meanwhile, Cersei scrambles to hold on to power in King's Landing amidst the Tyrells and the rise of a religious group led by the enigmatic High Sparrow, while Jaime embarks on a secret mission. Across the Narrow Sea, Arya seeks an old friend while a fugitive Tyrion finds a new cause. And as danger mounts in Meereen, Daenerys Targaryen finds that her tenuous hold on the city requires some hard sacrifices. SEASON 6: This year, after the shocking developments at the end of Season 5--including Jon Snow's bloody fate at the hands of Castle Black mutineers, Daenerys' near-demise at the fighting pits of Meereen, and Cersei's public humiliation in the streets of King's Landing--survivors from all parts of Westeros and Essos regroup to press forward, inexorably, towards their uncertain individual fates. Familiar faces will forge new alliances to bolster their strategic chances at survival, while new characters will emerge to challenge the balance of power in the east, west, north and south. SEASON 7: The long winter is here. Throughout seven thrilling episodes, the penultimate Season 7 focuses on a convergence of armies and attitudes that have been brewing for years. As the season begins, Daenerys Targaryen--accompanied by her Unsullied army and emboldened by Dothraki/Ironborn allies and her lethal trio of dragons--has finally set sail for Westeros with Tyrion Lannister, her newly appointed Hand. Jon Snow has apparently consolidated power in the North after his spectacular conquest of Ramsay Bolton and the return of Winterfell to Stark control. In King's Landing, Cersei Lannister, bereft of any surviving heirs, has successfully seized the Iron Throne. But as these and other factions drive towards new alliances or (more likely) violent conflicts, the cold spectre of another, apocalyptic threat--in the form of an army of undead White Walker--threatens to undermine the status quo and obliterate the outcome of these smaller, all-too-human rivalries. SEASON 8: With the Army of the Dead--led by the Night King, his White Walkers and an undead dragon--bearing down on Jon and Dany and their combined forces, a denouement eight seasons in the making will be reached, answering a myriad of questions surrounding the fate of the series' protagonists. Meanwhile, Jon's true identity promises to undermine Dany's claim to the Iron Throne...and, of course, Cersei has a devious strategy of her own.

Felix
5.0 out of 5 stars A must for collectors!
Reviewed in Australia on 30 December 2019
Verified Purchase
Exceptional collector’s edition. Beautifully made and worth every cent.
Let’s not go too much into season 8. This review is about the boxset not the entire series! 😎

JoelT
5.0 out of 5 stars Essential for GoT Fans
Reviewed in Australia on 3 August 2020
Verified Purchase
Fantastic box set which has everything you need to re-enjoy the entire Game of Thrones series. Plenty of extras and extraneous stuff that you will never watch. The Blu-ray quality is stunning! Totally worth it. Don't hesitate.
Read more
One person found this helpful
Helpful
Report abuse

michael taylor
5.0 out of 5 stars Fantastic quality Box set for re living a fantastic series .
Reviewed in Australia on 3 January 2021
Verified Purchase
A Fantastic series which is worthy of owning if your a fan. I shopped around and found Amazon to be the best value, and it was safely shipped the following day after ordering. The discs with extras are great quality, and should keep me busy for quite a few months to come! a I still like to have my favourite series on DVD as a nice keepsake.
Read more
Helpful
Report abuse

Linda Hart
5.0 out of 5 stars Good price
Reviewed in Australia on 3 January 2020
Verified Purchase
We liked the series, just found a lot of the scenes hard to see as a bit too dark.
Read more
Helpful
Report abuse

Elmo
5.0 out of 5 stars Games of Thrones
Reviewed in Australia on 5 June 2020
Verified Purchase
Season 8 was different to all the other seasons. Its a shame they are not making another episode.
Read more
Helpful
Report abuse

AK
5.0 out of 5 stars On Time
Reviewed in Australia on 20 March 2020
Verified Purchase
Product arrived on the stated date. The DVDs are of an excellent quality.
Read more
Helpful
Report abuse
See all reviews
Get FREE delivery with Amazon Prime
Prime members enjoy FREE Delivery and exclusive access to movies, TV shows, music, Kindle e-books, Twitch Prime, and more.
> Get Started
Back to top
Get to Know Us
Make Money with Us
Let Us Help You
And don't forget:
© 1996-2021, Amazon.com, Inc. or its affiliates