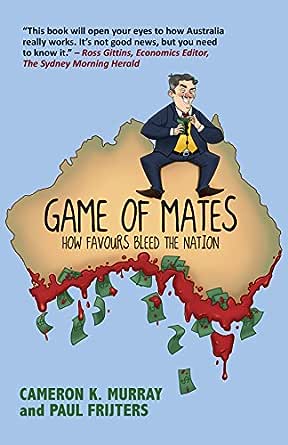 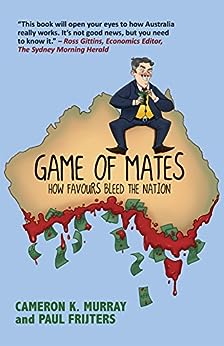 Game of Mates: How favours bleed the nation Kindle Edition

emma gyuris
5.0 out of 5 stars Beware!
Reviewed in Australia on 8 May 2017
Verified Purchase
This is an important eye-opener to all voting public. I always believed that I am well informed about public decision making, following democratically established principles. I was wrong! The level of systematic high-level corruption in Australia, that the book exposes, truly surprised me. This book should be compulsory reading for all university students, and a perquisite for citizenship to ensure that we all practice our democratic rights and obligations.
The book is written in a very accessible style, which makes it a bit verbose, but it can be read quickly and all claims are fully referenced and can be followed up in credible sources. The authors have done a great social service by writing this book.

Nick Marshall
5.0 out of 5 stars No conspiracy - just the worst of human nature
Reviewed in Australia on 3 September 2018
Verified Purchase
We all know that the trading of favours goes on but this book gathers the evidence in a systematic way to show that what has always gone on between people has reached epidemic proportions. I am not a conspiracy theorist and, mercifully, neither is the author. He takes pains to point out that he does not believe that Australia (or anywhere) is run by a secret group of evil people. He does point the finger at the neocon ideas and his own beliefs are clearly on the left side of the fence but he does not get bogged down with wild conspiracy claims.
The book is detailed and contains many quite complex ideas. I understood it a lot better on my second reading. I think it is a very important book because it takes such a deep look at the way Australia is run today. Its weakness is that it never really gets to grips with the question of whether it has always been like this or whether the behaviour of people in positions of power and influence have always been so selfish/narcissistic to the extent of fundamentally endangering themselves as well as everyone else. A good polity understands that the principles of ecology do apply to human society. The present political/corporate spectrum is a line of complacent bums in the air and heads in the sand. I don't think this has always been so. While this book is certainly worth reading for its very substantial survey of the present state of society in Australia, I think that the ideas presented by the writer Robert Prechter (The Socionomic Theory of Finance and other books) are a better explanation for the present dismal outlook. Prechter does not get stuck with political explanations. He sees human behaviour as cyclical and makes a good argument for the reasons for this.

RobMcK
5.0 out of 5 stars Depressing Clarity
Reviewed in Australia on 5 July 2018
Verified Purchase
Our elite have forgotten that with privilege comes responsibility.

The 'Game of Mates explains with a depressing clarity how the ultimate goal of 'making money' has weakened trust in our institutions and diminished our society.

For me, an incident in the 1970's as a newly articled clerk with an old and very prestigious City of London firm of Chartered Accountants marked the change.

The young and 'modern' senior partner asked us assembled newbies: "What are we in business for?"
We answered: "To help clients with Tax?" "To advise on cash flow?" "To prepare accurate accounts?" "To detect fraud?" etc. etc.

"No!" thundered the senior partner. "We are in business to make money."

Being a 'Professional' lost its original meaning for me that day. It is now just another word for a privileged, elite businessman with no responsibility for anything except making money.

Jim KABLE
TOP 50 REVIEWER
5.0 out of 5 stars Maaate! Australian Thievery Exposed (The James M.A.T.E. Conspiracy Against the Bruce Citizens)
Reviewed in Australia on 19 August 2019
Verified Purchase
Murray and Frijters explain the past 20-25 years in which the Australian egalitarianism of old has been re-worked into a class society now one of the most inequitable among the 20 odd OECD countries. Old school ties, huge public funding for the so-called private schools, university Vice-Chancellors paid far more than the nation's PM - cosy PublicPrivateParticipation infrastructure building companies and projects (totally opaque contracts), bureaucrats and ministers moving back and forth between private profit financial and other institutions - taking knowledge from one to the other blurring the ethical distinctions until they have basically disappeared - just think Private Health Cover abd pharmaceuticals, aged care facilities - family trusts and other tax avoidance at the major company/corporation level - superannuation scams, sell-off of most government instrumentalities, huge defence (so-called) contracts to build weaponry we don't actually need) ...on and on the rorting of our public common wealth goes on - into the hands of "gangs of mates" cronies - on both main sides of the political fence (think Shorten and Palaschuk and their complicity with the corrupt Adani and the shafting of the Wangan and Jagalingou peoples of Central Queensland) - and away from better public school funding, public health... I left Australia at the start of the 1990s and returned at the close of the 2000s - and quite frankly I could not recognise my own land - everything that had been public had been sold off to "Mates" - airlines, banks, public lands, Telecom, Australia Post...this book answered all my questions about how why, who, how and for what end - the treasonous ruination of an equitable and fair society to enrich Australia's own 1%ers.
Read more
Helpful
Comment Report abuse

Kindle Customer
5.0 out of 5 stars Fundamental human instincts to cooperate and trade even when this harms many others. Indirect corruption by favours
Reviewed in Australia on 12 August 2017
Verified Purchase
Laws and regulations fail to manage control of self benefits due to hidden group corruption. The concept of grey gifts, which governments leave around to enrich those that are in the trading circle. Government foresigh and public benefit is lost by special deals to capture national wealth among mates. Australian government now captured by various cartels of mates, and institutionalised deals that steal half of public wealth. This removes the capacity for fair and appropriate policy and administration. Prevention is far easier than late remedy.
Read more
4 people found this helpful
Helpful
Comment Report abuse
See all reviews from Australia

Thaumatechnician
4.0 out of 5 stars Economists point out what should be bleedin' obvious to everyone.
Reviewed in the United States on 25 October 2017
Verified Purchase
It's great to find out that some economists agree with, well, what I always thought to be obvious.
Fer starters: that individual retirement plans can never be as efficient as government-run or union-run pension plans, and the individualized plans are simply methods of transferring money from the individual wage-earner to unproductive rent-seekers.

Other ways in which the system is rigged are addressed. While this book covers the how it works in Australia, readers all over the world will recognize many, if not all scenarios. Games of Mates should be required reading for anyone who opines about 'how the systems works'.
Read more
2 people found this helpful
Helpful
Sending feedback...
Thank you for your feedback.
Sorry, we failed to record your vote. Please try again
Report abuse

Sarah Collins
5.0 out of 5 stars Brilliant
Reviewed in the United States on 15 July 2017
Verified Purchase
Well written and accessible. All of us should know about the James' that are bleeding us dry and understand that it's not grand conspiracy, but a giving of favours that our political and economic system allows for given its current structures.

If we want change ' Game of Mates' clearly illustrates the type of structural reforms we need. But it is also a reminder that we always need to be on guard and preferentially prevent James' from starting the Game of Mates in the first place. A game I fear will always emerge in a market based economy.
Read more
Helpful
Sending feedback...
Thank you for your feedback.
Sorry, we failed to record your vote. Please try again
Report abuse

GK
5.0 out of 5 stars Well researched, informative and easy to read. An excellent book.
Reviewed in the United States on 30 October 2017
Verified Purchase
Great insight into the opaque powers pulling the strings of Australian democracy and stealing wealth from everyday Australians. The authors not only provide a solid analysis of 'grey corruption' across a surprisingly large number of industries, but also offer original and practical solutions to stop Aussies getting ripped off by unscrupulous 'Mates'. The negative effects on productivity are an eye-opener. It's worse than you think! Highly recommended.
Read more
Helpful
Sending feedback...
Thank you for your feedback.
Sorry, we failed to record your vote. Please try again
Report abuse

Peter Cunningham
5.0 out of 5 stars How life in (at least) Australia works.
Reviewed in the United States on 7 December 2019
Verified Purchase
Sadly, confirms what I already know after decades of deliberate awareness. Wake up people - bigger wheels turn.
Read more
Helpful
Sending feedback...
Thank you for your feedback.
Sorry, we failed to record your vote. Please try again
Report abuse

Mr. U. Stephenson-Ward
5.0 out of 5 stars Excellent
Reviewed in the United States on 19 May 2018
Verified Purchase
This book perfectly articulates issues that are happening everyday in the economy. Worth buying and reading to get a better understanding of the way people are exploiting you and I.
Read more
Helpful
Sending feedback...
Thank you for your feedback.
Sorry, we failed to record your vote. Please try again
Report abuse
Load more international reviews

Sam Arnold
5.0 out of 5 stars Corruption in Australian Politics
Reviewed in the United States on 16 October 2017
Verified Purchase
An excellent book. Easy to read. Explains how the political, capitalist system works. An expose on corruption, unethical and dodgy business within Australia. It tells the reader just how comfy the corporate and political sectors sidle up to one another.
Read more
Helpful
Sending feedback...
Thank you for your feedback.
Sorry, we failed to record your vote. Please try again
Report abuse

James Scott
5.0 out of 5 stars Corruption of representative democracy
Reviewed in the United States on 21 March 2019
Verified Purchase
It was an eye-opener to have explained how lobby groups compromise the political process to get their way. They drive a wedge between the average citizen's claims and their own competing claims.
Read more
Helpful
Sending feedback...
Thank you for your feedback.
Sorry, we failed to record your vote. Please try again
Report abuse

Christopher Lander
5.0 out of 5 stars A factual look at politics and the bureaucracy
Reviewed in the United States on 13 August 2018
Verified Purchase
This should be compulsory reading for all year 12 students
Read more
Helpful
Sending feedback...
Thank you for your feedback.
Sorry, we failed to record your vote. Please try again
Report abuse