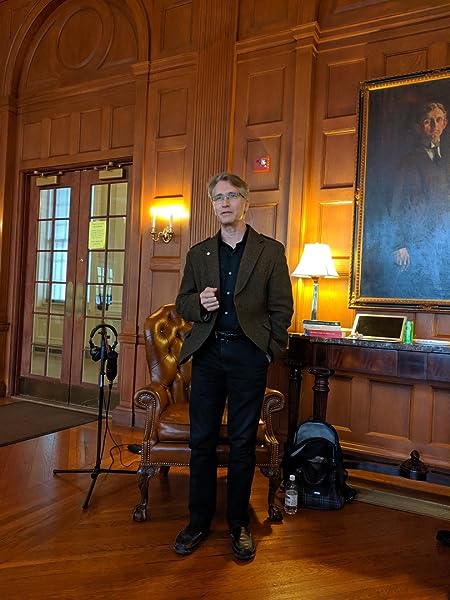 Gaelic In Your Gob: Four Dozen English Words That Came from the Scottish Highlands Paperback – 15 February 2021

by Michael Steven Newton (Author), Natalia Lopes (Illustrator)
4.4 out of 5 stars 4 ratings
See all formats and editions
Sorry, there was a problem loading this page. Try again.

"This book combines Michael's scholarship with humour. It showcases a delightfully gung-ho attitude to rabbit-hole dives into finer detail whilst retaining total intelligibility and reading pleasure for the person discovering the Scottish Gaelic language for the very first time or simply looking for a good old wander onto a less-beaten etymological track ... If your sights have been set on acquiring Scottish Gaelic, you couldn't make a better start than this little book, showing that for all its seeming exotic remoteness to the modern English speaker, a surprising number of our Gaelic words have in fact been in your gob all along."

"His careful scholarship and characteristically engaging style are on full display. While the etymological notes the book offers are thoughtful and intriguing, they serve most notably as a vehicle for the author's illuminating insights into the cultural, historical, and linguistic interplay between Gaelic-, Scots-, and English-speaking communities."

"Michael Newton's study of the Gaelic element in modern English and Scots is a book with impact. He gives a masterly account of the history of Scottish Gaelic, a language of inspired poets and songwriters, before going on to previous discussion (some of it enthusiastic but eccentric) of the Celtic element in English. The main part of his book provides analysis of nearly fifty important borrowings, word by word. Some of them (banshee, coronach, loch, slogan, whisky) are familiar. Others (dulse, ingle, jilt) will come as a surprise even to professional linguists. Clearly written, and yet underpinned by reference to the latest research, Michael Newton's survey will be essential not only to academic researchers, but to anyone with a love of Scotland's Highland heritage and the languages of Scotland and beyond."

Dr Michael Newton earned a Ph.D. in Celtic Studies from the University of Edinburgh in 1998 and was an Assistant Professor in the Celtic Studies department of St Francis Xavier University in Nova Scotia 2008-2013. He has written a multitude of books and articles about Gaelic culture and history and is a leading authority on Scottish Gaelic heritage in North America. He was the editor of Dùthchas nan Gaidheal: Selected Essays of John MacInnes, which won the Saltire Society's Research Book award of 2006, and the author of Warriors of the Word: The World of the Scottish Highlanders, which was nominated for the 2009 Katharine Briggs Award for folklore research. In 2014 he was given the inaugural Saltire Award by the St. Andrews University Scottish Heritage Center (of Laurinburg, North Carolina) for his "outstanding contributions to the preservation and interpretation of Scottish history and culture." His 2015 publication Seanchaidh na Coille / Memory-Keeper of the Forest: Anthology of Scottish Gaelic Literature of Canada, the first anthology of Gaelic-Canadian literature and analysis of it, was nominated for the Scholarly Writing category of the Atlantic Book Prize. In 2018 he was recognized with the International award at the annual Scottish Gaelic awards in Glasgow, Scotland. The book that he co-edited with Wilson McLeod, An Ubhal as Àirde / The Highest Apple: An Anthology of Scottish Gaelic Literature, was awarded with the Best Gaelic Non-Fiction Book of 2020 by the Gaelic Books Council of Scotland.

MRS T M FERN
3.0 out of 5 stars Too costly for what it is
Reviewed in the United Kingdom on 3 March 2021
Verified Purchase
Overpriced but reasonably entertaining
Read more
Report abuse

Amazon Customer
5.0 out of 5 stars Who knew that Gaelic had such a big impact on the English Language?
Reviewed in the United Kingdom on 13 March 2021
Verified Purchase
A great book, fun to read and educational at the same time.
Read more
Report abuse

George Young
5.0 out of 5 stars Fascinating
Reviewed in the United States on 18 March 2021
Verified Purchase
I am a casual Gaelic learner and found the history of these words totally fascinating. Even if you aren't studying the language you will find this book terrific. Gob-smacked comes from gob or beak of a bird. The Gaels would say to a child Duin do gob or shut your beak. Highly entertaining
Read more
Report abuse
See all reviews
Back to top
Get to Know Us
Make Money with Us
Let Us Help You
And don't forget:
© 1996-2021, Amazon.com, Inc. or its affiliates