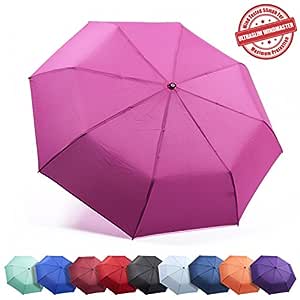 by Frostfire
3.7 out of 5 stars 2,510 ratings
International product from outside Australia

Murphy
4.0 out of 5 stars Great umbrella and even better costumer service!
26 May 2016 - Published on Amazon.com
Verified Purchase
First and foremost, I actually went though two of these umbrellas. (But the first one was not because of a performance issue, it was because I lost it. So that doesn't count) The second one, however, broke when I attempted to close/retract the umbrella. (also not because of a performance, and I'll explain why) On a regular walk down the street, I realized that the rain had stopped, so I pressed the button to release the spring that held the umbrella open, but when I came to push down on the top of the umbrella, I missed the center portion and my hand went down on one of the limbs, breaking one of the joints. Miraculously, the umbrella still works! it still opens and closes, and it'll still keep be dry in a down pour.
However, concerned that this breakage my end up being catastrophic in the future, I contacted costumer support, aware that they have a LIFETIME GUARANTEE for this product. So I emailed them and told them what happened, before I knew it, my replacement was in the truck heading to me (for free!); no fuss at all! They continued to check up on me and made sure my replacement arrived safely. During the entire interaction, from beginning to end, the representative was polite, it was obvious that they really wanted to fix this issue. FANTASTIC COSTUMER SERVICE. * * * * *

Now to the performance of the umbrella. Without a doubt, this umbrella will keep you dry as good as any other umbrella can. But what makes this different than any other umbrella is the design. The limbs are made out of a more flexible material (fiberglass I think?) and a more rigged base (Steel instead of aluminum). The result of this is a stronger and a much more reactive umbrella when faced against mother nature. THIS UMBRELLA CAN TURN INSIDE OUT when given enough push, I tested it by pumping my arms a few times with the umbrella open (So don't think about going Mary Poppins around town with this), *BUT*, if it were to turn inside out, you or the wind would have a much harder time inducing a catastrophic failure.

Overall, if you want a sturdier, more reliable umbrella for whatever reason your life or mother nature deems necessary, get the Kolumbo umbrella. It'll save you money in the long run (because I've bought like ten of the $5 umbrellas from dollar stores)
Read more
38 people found this helpful

Liz Raines
5.0 out of 5 stars ...like the umbrella
31 March 2016 - Published on Amazon.com
Verified Purchase
UPDATE:
Previously posted that the umbrella was not windproof. Within a couple days, I was contacted by customer service and was given replacement umbrella. Although we have been having nice weather with very little winds, I had to try out replacement. I opened umbrella and attempted to simulate high winds. This time umbrella did not flip. I can't wait to try it out again when the weather gets bad. I was also very impressed with the customer service team and the pride the company takes in their product. I can say now that I would definitely order from this company again. Thank you Kolumbo team.

I was so excited about this purchase. I live in the country where straight line winds can be brutal. The day my umbrella arrived we were expecting rain and the wind was up. I immediately went outside to try it out. As soon as I opened the umbrella it flipped back. I tried several times facing different directions and every time the wind hit straight on the umbrella flipped inside out. It also seemed to flip quite easily. Although it was windy, it was not close to being 55mph. I must say I was somewhat disappointed. On the brighter side though, I love the color. I also liked the automatic open/close. It was easy to operate and felt sturdy.
Read more

Susk
2.0 out of 5 stars Love/Hate these umbrellas
10 July 2018 - Published on Amazon.com
Verified Purchase
Love/Hate relationship with this umbrella line. They are great when they're not broken. Bought several for Christmas presents and two of them work great while the third was hardly used at all and a connection point of one of the ribs broke. Greg at Kolumbo customer support responded quickly about a replacement under the company's lifetime warranty (I provided a photo of the broken part and the Amazon invoice), but they were out of stock on the color black. Have been waiting about a month to receive a new one as promised. I thought maybe the breakage was a fluke and bought two more of these umbrellas for birthday presents. On the first use, one of them broke at the same location, where a rib attaches. It was in no way abused or even handled roughly. Apparently, quality is inconsistent or I have just been lucky with the ones that haven't broken yet. Can't get an email regarding this latest breakage to go through to Kolumbo customer support. I'm wondering if this flaw has put them out of business?
Read more
4 people found this helpful

Ahsan
1.0 out of 5 stars Having common problem, broken rib
27 October 2016 - Published on Amazon.com
Verified Purchase
Bought in march, 2016 and never used. Now it was raining in November so I started to use. Just after few days I pressed the button to open and saw one rib is broken. I bought this after wasting money on some cheap umbrellas but this time again disappointed.
Read more

MissyGrace
1.0 out of 5 stars I don't recommend this umbrella if you are buying it to withstand ...
11 January 2017 - Published on Amazon.com
Verified Purchase
I bought this umbrella because of the claims that it can withstand 55 mph winds. I live in Chicago. I went for a walk this morning and it was raining slightly. I had the umbrella open and it broke. The winds in Chicago today are 23mph. The spot where I was walking may have been a bit windier, but certainly wasn't 55 mph. I don't recommend this umbrella if you are buying it to withstand windy days in a windy city.
Read more
11 people found this helpful
Go to Amazon.com to see all 2,487 reviews 3.6 out of 5 stars
Get FREE delivery with Amazon Prime
Prime members enjoy FREE Delivery and exclusive access to movies, TV shows, music, Kindle e-books, Twitch Prime, and more.
> Get Started
Back to top
Get to Know Us
Make Money with Us
Let Us Help You
And don't forget:
© 1996-2020, Amazon.com, Inc. or its affiliates