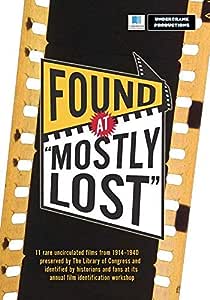 The 11 films on "Found at 'Mostly Lost'" are not only new to DVD, this is probably the first time anyone has seen any of them in decades. Until now, these one-of-a-kind rare shorts could not circulate because they were unidentified, meaning that their main titles were missing, due to damage or decomposition. But now they can be seen, thanks to the participants in the annual "Mostly Lost" film identification workshop, presented by the Library of Congress, who have identified these rarities. You'll recognize comedians like Snub Pollard, Hank Mann, Monty Banks, Jimmie Adams, and even pre-Lucy William Frawley in an early sound film of his vaudeville act. Musical scores for the silent films on the DVD are by Philip Carli, Ben Model or Andrew E. Simpson.

Tommie Hicks Jr.
5.0 out of 5 stars Extremely rare and fragile films resurrected for our enjoyment.
13 April 2016 - Published on Amazon.com
Verified Purchase
Painting remained popular after the invention of photography and live musical performances are tremendous money makers despite the invention of recorded music. Most unfortunately silent film comedy disappeared from the cultural consciousness after the invention of sound film. Silent film comedy stalwart, historian, and musical accompanist Ben Model, and his crew, and the Library of Congress, toiled to bring us these gems of silent comedy that were originally slated for oblivion after their initial runs. These films were shown at a film identification workshop hosted by the LOC. Most of these films are not intact and gives the viewer an indication how fragile these old films are. There is a well rounded selection of comedians and studios with a sprinkling of early talkie comedies and dramatic and test footage. Thanks Ben and the LOC for a fine disc of antique film to watch. May we have another?
Read more
5 people found this helpful

Roger T Smith
5.0 out of 5 stars Lost and FOUND
3 October 2013 - Published on Amazon.com
Verified Purchase
I thought "Lost and Found" was a terrific DVD story about the plight of orphans in Uganda. I am particularly impressed by the couple from Oregon who have dedicated their declining years to the parenting of these lost children. I am also a little worried about their safety in such a chaotic country. May they have conyinued success.
Read more
One person found this helpful

Louis Dicrescenzo
5.0 out of 5 stars Back from the Dead!!
8 April 2016 - Published on Amazon.com
Verified Purchase
Great films thought dead,are alive and well in this great DVD
Read more
2 people found this helpful

Nelson Hughes
5.0 out of 5 stars Undercrank Productions brings an amazing film festival to dvd.
19 April 2016 - Published on Amazon.com
You may know about this film workshop that takes every June in Culpeper Virginia that is known as Mostly Lost.For over three days, historians, scholars and fans try to identify silent films that no longer have their opening and closing titles.But many fans (including myself) haven't been able to make the trek down there to experience the fun and that's where Undercrank Productions comes in.Now for the first time, Undercrank brings that magic to the fans in the comfort of their own home with their latest dvd release, FOUND AT MOSTLY LOST.

This one of a kind dvd shines the spotlight on past Mostly Lost workshops with 11 extremely rare (mostly silent) films spanning from 1911 to 1940 all presented here for the first time on dvd.Six silent comedies, two melodramas, two all talking shorts and one test footage are included here.Below are the films that have been identified and that is presented on this disc.

THE NICKEL SNATCHER ('20) An Arrow comedy featuring underrated comedian Hank Mann and with direction by Charley Chase who also appears in the film as one of the crooks.This film was originally released as a two reeler but only a single reel survives today.

THE PAPER HANGER'S REVENGE ('18) A Bob Duncan comedy, shortly after the split with Lloyd Hamilton in the "Ham And Bud" series.Kewpie Morgan also stars.

VENTRILOQUIST ('27) A Lee Deforest all talking short of William Frawley in a vaudville act.

IN AND OUT (20/21?) Featuring Monty Banks and Cliff Bowes.Possibly originally distributed by the fledgling Warner Bros. who released comedy shorts in the early 20s.

Out of the 11 films here, several suffer from nitrate decomp and have been preserved with the prints looking really good to excellent on this disc and the great musical scores are provided by Phillip Carli, Ben Model and Andrew Simpson.In all, this is hands down a must have for your video library and hopefully this will become a regular dvd series in the future.Undercrank Productions is the new leader in the home video market on getting very rare silent comedies that no one will release to modern day film fans, so do yourself a favor on pick up your copy and checkout Mostly Lost in June.


Read more
15 people found this helpful
Go to Amazon.com to see all 19 reviews 5.0 out of 5 stars