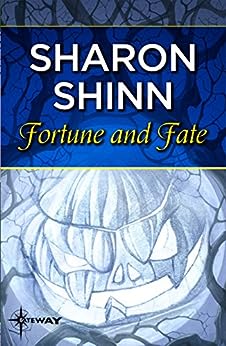 Sharon Shinn (1957- )Sharon Shinn is an American novelist whose stories combine aspects of fantasy, science fiction and romance. She has published more than a dozen novels for adult and young readers and her works include the Shifting Circle Series, the Samaria Series, the Twelve Houses Series and a rewriting of Jane Eyre, Jenna Starborn. She works as a journalist in St Louis, Missouri and is a graduate of Northwestern University. --This text refers to an alternate kindle_edition edition.

4.7 out of 5 stars
4.7 out of 5
72 global ratings
How are ratings calculated?
To calculate the overall star rating and percentage breakdown by star, we don’t use a simple average. Instead, our system considers things like how recent a review is and if the reviewer bought the item on Amazon. It also analyses reviews to verify trustworthiness.

Nell Poppenbeek
5.0 out of 5 stars A favourite
Reviewed in Australia on 20 August 2017
This is one of my favourite books in the Gillengaria series—I've read it about 5 times! I love that Wen overcomes her survivor's guilt and becomes a kind of second mother to the heiress and the other children she saves, as well as finding a man who is quietly determined to love her. It's soooo romantic. Ignore the weird and scary cover.
Read more
Helpful
Report abuse
See all reviews

Paul Tapner
5.0 out of 5 stars life after wartime
Reviewed in the United Kingdom on 9 December 2009
Verified Purchase
A new novel from writer sharon shinn, who specialises in fantasy stories with a touch of romance. Set in the same fantasy kingdom as four of her previous novels called novels of the twelve houses. The fourth of those concluded the story of the main group of characters from them, but this spins things off in a new direction by taking a minor character from those four novels and putting them centre stage.

Whilst you could probably get into this without having read those four earlier books
Mystic and Rider (Ace Fantasy Book)The Thirteenth House (The Twelve Houses)Dark Moon Defender (The Twelve Houses)Reader and Raelynx (Twelve Houses)  the main characters from those do feature here and the backstory - despite being quite well detailed here - means you're possibly better off starting with them.

And they're very good reads anyhow, so why not?

Anyhow, the land of these tales is a medieval style world ruled by a king and twelve noble houses. there are also mystics who have magical powers. after some of the nobles rebelled against the king and lost, wen, one of the elite group of riders who guards the monarch, has left her role and now travels alone, helping out those in need. she has things she feels she needs to atone for. when she saves sixteen year karryn from kidnappers, she cant quite bring herself to walk away from the girls life and the offer from her uncle jasper, a scholarly man, to train her guards.

jasper, karryn, and wen, three very different people, are about to get to know each other better. and all will be changed by the experience.

This is not a book of action - there are roughly four quick battle scenes in the entre 433 pages - it's a tale of character. and as regular readers of this writer will know, she's very good at that kind of tale. People develop and change over the course of the story, and you find yourself drawn into it and caring for these characters and wanting to know what will happen to them as a result. All of which makes for a really good and entertaining read.

Another fine piece of storytelling by a master of this kind of work.
Read more
4 people found this helpful
Report abuse

Fren
5.0 out of 5 stars Excellent
Reviewed in the United Kingdom on 21 June 2017
Verified Purchase
This is as good as Mystic and Rider and finishes the series nicely. As usual the characters are rounded and believable
Read more
Report abuse

Mina
5.0 out of 5 stars Wonderful visit to the world of the „Twelve Houses“; a very compelling and entertaining companion novel to the series
Reviewed in Germany on 5 September 2016
Verified Purchase
Note: one could read the book without the knowledge of the events in the main series “The Twelve Houses”, but this being a companion book to another series, there is no overabundance of explanations of the world, the people and the magical and society systems. So: it's more fun to know the main series.

Review
I liked the “Twelve Houses” series a lot, all it's characters [well, some more than others], the world of Gillengaria with magic and gods and its feudal system and last not least the overall story arc of a realm on the verge of a civil war and the final showdown of rebels against crown, of magic-hating fanatics against magic users and the tolerant people. And with the series' last installment “Reader and Raelynx”, the war is decided, the kind dead, his daughter on the throne and all of the six main characters and their loved ones survived.

This is a book about Wen, a Rider who survived, while king Baryn was assassinated and although the war is won, there is no peace of mind for her, since she cannot forgive herself for living, when her king is dead. So she fled the Riders and for two years is now roaming the country doing her version of penance by helping each and everybody who is in need. It's a kind of irony that one of the people who desperately need her is the Fortunalt serramarra, who inherited her late rebel father's estate and title. And although Wen thought she'd always would hate anything to do with the rebel houses who arranged the assassination of her beloved king, she takes on the job of chief of guard for Karryn Fortunalt. No, it's not as easy as it seems with this one sentence, but Wen's internal struggle is one of the things that make this book so worthwhile to read. It feels very real, Wen's self-loathing just as much, as her grudging admittance that she might like Karryn, her guardian Jasper and the guard she installs. Karryn is in constant danger and that makes it really hard for Wen to leave and continue her loner-life.

What made me nearly giddy with delight was the return of Senneth and the rest of the group, as Cammon, who is now consort to his wife queen Amalie, is traveling the southern counties and Senneth, Tayse and the rest accompany them. Their story is finished, but they still are great to listen to and I was truly happy to meet them again.

If you liked the other books in the series, you'll like Wen's book as well. She makes for a strong and no-nonsense character, as are her love-interest Jasper and Karryn the serramarra. A very cool addition to the series. I like!
Read more
Report abuse

A. Radcliffe
4.0 out of 5 stars A good book
Reviewed in Canada on 10 June 2009
Verified Purchase
Wen's tale puts a satisfying cap on many of the loose threads from the previous books of the series, notably Senneth's. While Wen's romance wasn't particularly scandalous or juicy in and of itself (and to be frank, none of the romances from this series I think are as great as from the Samaria novels) the book is nevertheless a solid tale in its own right and a thoroughly enjoyable read.
Read more
Report abuse