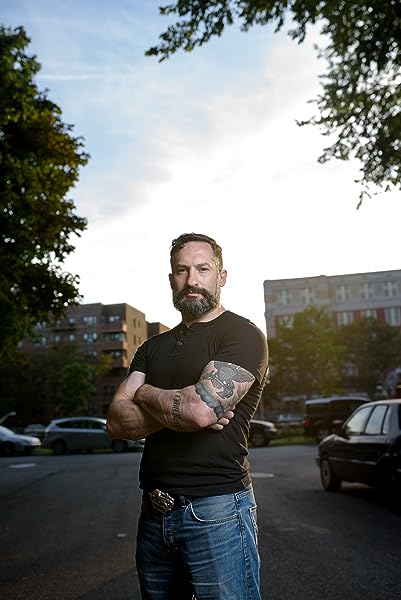 Page 1 of 1 Start overPage 1 of 1
Previous page
Next page
Start reading Fortress Frontier on your Kindle in under a minute.

As a security contractor, government civilian, and military officer, Myke Cole's career has run the gamut from counterterrorism to cyber warfare to federal law enforcement. He's done three tours in Iraq and was recalled to serve during the Deepwater Horizon oil spill. He recently joined the cast of the TV show Hunted on CBS as part of an elite team of fugitive hunters. All that conflict can wear a guy out. Thank goodness for fantasy novels, comic books, late-night games of Dungeons & Dragons, and lots of angst-fueled writing. Myke is the author of Javelin Rain and Gemini Cell, prequels to his Shadow Ops novels, which include Breach Zone, Fortress Frontier, and Control Point.

Kelvin de Waele
5.0 out of 5 stars More please
Reviewed in Australia on 20 June 2018
Verified Purchase
A fitting finale for a great series.

Left me wanting more, but satisfied with how this trilogy played out.

I will be looking for more Myke Cole books to devour.

Andy Sainsbury
5.0 out of 5 stars wow
Reviewed in Australia on 28 May 2014
Verified Purchase
Another sensational installment. Just as good, if not even better, than book one. Love the character of Bookbinder and continuation of Therese, Swift and our hero Oscars storylines
Read more
Helpful
Report abuse
See all reviews

Chantal Lyons
5.0 out of 5 stars A great continuation
Reviewed in the United Kingdom on 16 February 2013
Verified Purchase
Fortress Frontier grips you from the beginning, and the fast pace doesn't let up. The previous book, Control Point, had its flaws; principally the yo-yoing between mindsets of Oscar Britton, the main character. It helps that in Fortress Frontier, Bookbinder, a new character and the focus for a large portion of the novel, is much more likeable and easy to root for.

The fantasy element goes up a notch in the second novel, and this isn't a bad thing as the author handles it well (think snakes. Big snakes). But the key strength that both novels share is the clash and fusion of magic and technology - where else can you read about rocs sparring with helicopters?! It makes for endlessly fun reading and put a smile on my face at the epic-ness of it all more than once.

It's a testament to the novel that I was really disappointed to have come to the end of it, but I liked how one of the main arcs from Control Point had its resolution, with a few hanging threads left to whet the appetite for the next instalment.

As a stand-alone novel, I'm not quite sure it works. Although those who read the previous book will be as unfamiliar with Bookbinder as new readers, once the POV switches back to Oscar Britton there isn't much of a fill-in. So I recommend reading Control Point before this one.
Read more
One person found this helpful
Report abuse

G. R. Matthews
5.0 out of 5 stars Better get betters again!
Reviewed in the United Kingdom on 9 January 2014
Verified Purchase
This is even better than book 1: Control point!

Myke Cole introduces a new character - Bookbinder - who is so well constructed that you can easily inhabit his world, and his view. The action comes thick and fast but there is a human heart at the centre of it all. When the world collapses on Bookbinder, as he faces crisis, as he grows, changed and realises who he really is - we are right there with him.

It overlaps with Control Point and, yes, Oscar is in this one too - he just isn't the focal point. It is a clever way to construct a sequel and it works so well.

I bought this book straight after writing the review of book 1 (7th Jan) and finished it a day later (and I worked a 12 hour day inbetween! - colleagues / work mates - this book is why I looked so tired today!).

Do yourself a favour, buy the first one, read it, buy the second one, read it. You won't be disappointed.
Read more
Report abuse

Mc Ellis
3.0 out of 5 stars I hate to be a bit of a wet blanket... but
Reviewed in the United Kingdom on 19 April 2013
Verified Purchase
Its not brilliant. The problem is that it just feels very short. Both in terms of plot covered and duration covered. It is also a sequel in truest sense of the word. It pretty drops you back in where you left off in the last one.
It almost feels like Myke was forced to publish his first book before he was ready. So they chopped it in half and made it two.

Its not BAD. The premise is still good and he is a good writer. However, I just dont think it deserved to be a second book.

Having said all that. If you read the first one and enjoyed it. Buy this one, read it. It gives you a decent amount of closure if nothing else :P
Read more
One person found this helpful
Report abuse

Stephen Clarkson
5.0 out of 5 stars Excellent Sequel
Reviewed in the United Kingdom on 2 August 2013
Verified Purchase
This book is an epic sequel.

In the first book I often found Oscar Britton frustrating in his indecision, constantly flip flopping.

The introduction of Alan Bookbinder and his unique magic was a fantastic addition, I found myself invested in the character from the beginning.

Harley
5.0 out of 5 stars I love this author
Reviewed in the United Kingdom on 11 March 2016
Verified Purchase
I love this author. I love this series. He writes with authenticity and love, which is really apparent in each line. The smallest niggling problems I had with the first book are completely ironed out in the second, and the series goes from strength to strength. One of my favorite sci fi series, and one I recommend to anyone asking for a good read. Start with the first book in this series - but do start!
Read more
Report abuse
See all reviews
Back to top
Get to Know Us
Make Money with Us
Let Us Help You
And don't forget:
© 1996-2021, Amazon.com, Inc. or its affiliates