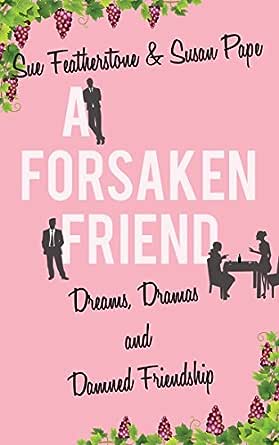 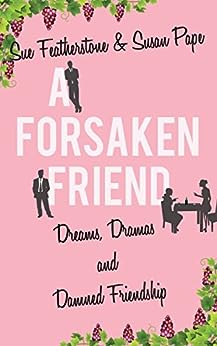 "A warm, funny and entertaining read, full of twists and turns. The plot races and winds. The characters are engaging. The tone is sharp and witty, the adventures outrageous. Just the thing to brighten up a cold dark winter evening." - Annie Goodyear

"What a fun read this is!" - Barbara Quinn

GraemeCumming
4.0 out of 5 stars Enjoyable Read
Reviewed in the United Kingdom on 17 September 2018
Verified Purchase
This isn’t my normal genre of reading but, having met the authors, and being a little more open-minded than I used to be, I thought I’d give it a go.
The chapters are written from viewpoints that alternate between the two main characters. I understand that each of the authors has taken a character and focused on that viewpoint throughout. It’s a clever device, though there’s the potential for chapters to overlap with the same scenario played out from a different perspective. Fortunately, this is kept to a minimum, so the story keeps up its momentum throughout.
It’s possible to read this as a stand-alone, but I suspect reading A Fallen Friend first would have helped me get to grips with the relationship between Teri and Lee more rapidly.
I won't go into detail about the plot because there's enough of that elsewhere, and I think it's for the reader to find out anyway.
Perhaps because it’s not my normal genre, I wasn’t as gripped by it as I know some other reviewers have been. But personal preference is the only reason I haven’t given it 5 stars. I can understand why it will appeal to fans of Chick-Lit especially those who appreciate that sex and romance don’t suddenly stop when you reach a certain age.
Enjoyable read.

Julia
4.0 out of 5 stars Easy reading
Reviewed in the United Kingdom on 2 March 2020
Verified Purchase
Fun and full of twists, leaving you with ongoing situations between two very different friends. Eager to know what happens next.
Read more
Helpful
Sending feedback...
Thank you for your feedback.
Sorry, we failed to record your vote. Please try again
Report abuse

James L. Weaver
5.0 out of 5 stars Now she’s scrambling to find her place in the world with a series of not so good decisions regarding men and finances
Reviewed in the United States on 31 May 2018
Verified Purchase
I just finished A Forsaken Friend, the second book in the Friends triology and sequel to last year’s A Falling Friend by Sue Featherstone and Susan Pape. The story follows Teri and Lee as they continue their tumultuous friendship.

Teri is a mess after losing her job at the university and her allowance from her father when his business partner runs off with the money. Now she’s scrambling to find her place in the world with a series of not so good decisions regarding men and finances.

Lee seemingly has it all going with her love life looking up, albeit with her BFF’s ex-husband, but a family crisis and Teri’s lack of support has everything whirling.

A Forsaken Friend is really a humorous and enjoyable tale told from alternating perspectives of two lifelong friends who both love and can’t stand each other. Pape and Featherstone do a masterful job of depicting the same scenes from two different perspectives yet making each fresh and new.
If you enjoyed A Falling Friend (which I did), you really need to read A Forsaken Friend because it’s a better book. If you haven’t read either, then get busy. It’s labeled as a chick-lit book, but anyone who enjoys flawed and real characters will like this one. Check it out.
Read more
Helpful
Sending feedback...
Thank you for your feedback.
Sorry, we failed to record your vote. Please try again
Report abuse

John Williamson
5.0 out of 5 stars The Girls Are B-a-c-k !
Reviewed in the United States on 29 April 2018
Verified Purchase
Yes, they are. We first got to know gal-pals Lee and Teri in “A Falling Friend”, which featured the unlikely friendship of two polar opposites, the staid Lee and the very, very edgy Teri. That debut effort was characterized by an onslaught of witticisms which peppered the text and which forced one to read every word so as not to miss anything subtle – a task made more difficult for Yanks who don’t always know the British slang. (Britticisms?)

Still, there were plenty of outright hilarious lines this time around as well: In discussing a trendy restaurant: “Last time I ate a steak there it was so rare a good vet could have resuscitated it.” Ya gotta admit, that’s pretty great. And this: “One girl wore a glittery gold dress so short and so low cut it was little more than a belt. “I’m wearing it in the ironic way.” Comedy gold, as David Letterman used to say.

As for the story itself…well, it’s complicated. Endlessly so. Lee and Terri and their romantic and family relationships get ever more tangled up, and these convolutions produce all manner of conflict and misunderstanding, all of which takes the entirely of the book to sort out…mostly. Not to worry, these two never run out of problems to deal with – some imposed on them by others and some self-created – and the end of this volume gives promise that there’s plenty more to come.
Read more
Helpful
Sending feedback...
Thank you for your feedback.
Sorry, we failed to record your vote. Please try again
Report abuse