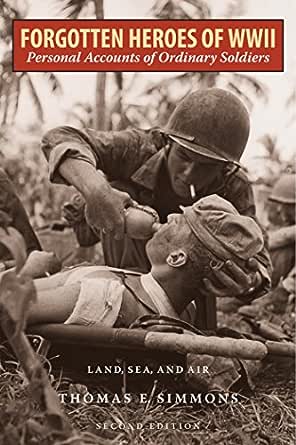 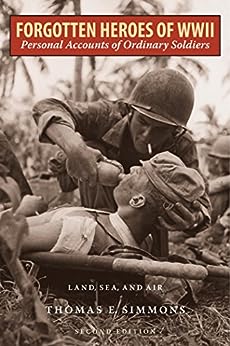 PRAISE FOR THE FIRST EDITION
Forgotten Heroes of World War II . . . offers contemporary readers fourteen intensely personal perspectives of individual rank-and-file soldiers, aviators, and seamen who were quite ordinary people thrown into the extraordinary and often horrific demands of World War II combat. Their strength and valor are commemorated in this moving, compelling, informative, and highly recommended contribution to the growing library of World War II military histories.

Thomas E. Simmons is the author of The Brown Condor, Escape from Archangel, and The Man Called Brown Condor. He has served as commercial captain of a seventy-foot sailing vessel, been a pilot since the age of sixteen, flown professionally, and participated in air shows flying aerobatics in open-cockpit bi-planes. In 1960 he served as an artillery officer in Korea. He lives in Gulfport, Mississippi.
click to open popover

Jeanie
5.0 out of 5 stars Brave men!
Reviewed in Australia on 25 March 2016
I had the honor and privilege to meet three of the men in this book: Oscar Russell, Harry Bell and Jerry O'Keefe at the book launch in Biloxi, Mississippi in November. I felt like I was hugging my dad. He, too, was a WWII vet, William H. Collins, but he died at age 69. Reading this book, I realized how much time I wasted and how I should have listened to him more. Harry Bell was a POW in a Nazi camp and swore to keep his men alive until they were rescued. He did just that, saluting the commander as they rolled in with the tanks, "All men here and accounted for, sir." Brings tears to my eyes. Oscar Russell served in both the European and Pacific theaters. Amazing man! Jerry O'Keefe is a living legend in Biloxi. What an incredible pilot and honorable man.

All the men and women who ever served are heroes, and so are their families. I salute them all.
— Jeanie Loiacono

Betty
5.0 out of 5 stars Great book; actual first-hand accounts
Reviewed in the United States on 11 May 2019
Verified Purchase
This is a great book - especially if you have an interest in WWII history. It is well-written and contains several first-hand accounts from the men to lived them. It gives you new appreciation for what they went through and respect for the men whose stories are told.
Read more
Helpful
Sending feedback...
Thank you for your feedback.
Sorry, we failed to record your vote. Please try again
Report abuse

Tim A. Graham
5.0 out of 5 stars As Advertised
Reviewed in the United States on 19 August 2019
Verified Purchase
As Advertised
Read more
Helpful
Sending feedback...
Thank you for your feedback.
Sorry, we failed to record your vote. Please try again
Report abuse

Kindle Customer
5.0 out of 5 stars Excellent read. Could not put it down!
Reviewed in the United States on 25 December 2019
Verified Purchase
Very real stories by very real heroes!
Read more
Helpful
Sending feedback...
Thank you for your feedback.
Sorry, we failed to record your vote. Please try again
Report abuse

Kindle Customer
5.0 out of 5 stars Great read
Reviewed in the United States on 20 January 2015
Verified Purchase
Honest telling of regular soldiers stories
Good overview of Europe and the Pacific...
Short vignettes that are easy to digest...
Read more
One person found this helpful
Helpful
Sending feedback...
Thank you for your feedback.
Sorry, we failed to record your vote. Please try again
Report abuse