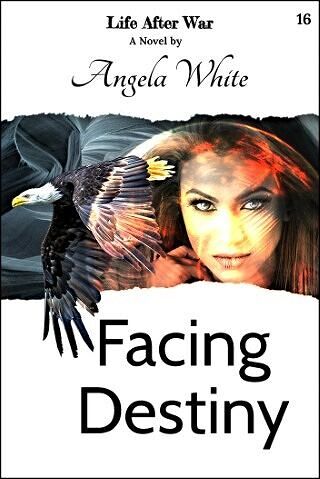 by Angela White (Author)
4.4 out of 5 stars 39 ratings
See all formats and editions
Sorry, there was a problem loading this page. Try again.

“After the apocalypse, there were no jails, no police. We had to do something with the criminals. Letting those killers fight it out for our entertainment achieved two goals at once. The apocalypse was depressing. Fresh blood brightened our day.” –The Network Council, 93AW.

Centuries later, the simple battles have evolved into a dystopian nightmare where the contestants are all female and the prizes are enslaved males who have been programed to be perfect, submissive mates. Families are strongly encouraged to sell any sons to the Network in exchange for food and fame. Those who resist are labeled rebels and tracked down by bounty hunters with no mercy. The Pruetts are the worst of that lot, and also the best.

Sam Pruett is the roughest of her family. She wants an unused bachelor, and she loves to fight, but bringing down the Network is her real goal. When she heads to the time trials to start her turn in the games, chaos follows her every step of the way, but the only man who lingers in her mind is Baker, the leader of the rebels. As the Network’s hold finally begins to weaken over the country, Sam will face new challenges and horrors to ensure Baker’s survival.

Baker loves Sam. He also loves his freedom. He’s willing to sacrifice one to get the other, but it isn’t that simple. The Network wants all of them gone and they’ll go to any length to accomplish that goal. They’ll even infect the males with the rage disease.

Will these two star-crossed lovers bring an end to their common enemy or will the Network kill them all and succeed in conquering the entire world? Either way, they’ll all be forever changed.

Get 90 days FREE of Amazon Music Unlimited
with the purchase of any eligible product. Shop now
Start reading Forever Changed (The Bachelor Battles Book 3) on your Kindle in under a minute.

Follow your dreams, even when the world says it’s crazy. Sometimes, you’ll find a life that satisfies you more than you ever thought was possible. Chase that, starting right now, and the next time someone asks who you are, tell them you’re an immovable force, a wild dreamer, a hopeful comet shooting toward the goals that orbit your existence. And then lift your chin. There aren’t many of us left who want to be good at what we do. Everyone else just seems to want that green shit.

I now write full time and live on a small ranch with my family and our clowder of barn cats. You haven’t laughed until you’ve seen newborn kittens playing in the weeds. It’s an amazing way to begin the day. Thank you to everyone who gave me a try. I wouldn’t have this life if not for all of you. Self-sufficiency is an indescribable gift, especially when you grow up poor. May someone help each of you the way you’ve helped me.

Karen
4.0 out of 5 stars Awesome Series!
Reviewed in Australia on 13 April 2021
Verified Purchase
Well, what a book this was!

I was really surprised by the length of this book! Due to this we are bombarded with so much new information and new characters as well. There were plenty of shocking revelations and in all honestly it was quite overwhelming. I would read along and come across a moment where a secret has been revealed and yet I didn’t remember where it came from? Like did I miss it while reading? 😂

But despite all that, this was a really good way to end this series. I really enjoyed getting multiple POV from most of the main characters and seeing them triumph, fail and being driven throughout this war to end the tyranny of the Network. It was great to see them all fighting for each other and the freedoms they long for. I also liked by the end of the story, we see a realistic view of the different opinions of a post-war discussion. Not everyone will agree to the same thin and compromises must be made. I do hope a short story or a spin-off series can be written about the aftermaths of this New America. I would love to see the descendants and how they are coping with this new world.

Overall it was a great and fun series, really enjoyed it and will definitely check out Life after War series.
Read more
Helpful
Report abuse
See all reviews

Julie M
5.0 out of 5 stars Amazing end to a great series
Reviewed in the United Kingdom on 11 March 2018
Verified Purchase
Wow !! I loved the fast pace of storyline of this book. It pulled you in and I couldn't put it down. The characters were feral on times but to watch them grow , entwined in a changing world , where values were switched was great. This is a long book but it's needed to complete the story. The end left you feeling satisfied that the main plot was complete. There is scope for spin off books , but actually i think it's finished exactly right. Well worth reading
Read more
Report abuse

Miri
4.0 out of 5 stars I didn't want it to finish.
Reviewed in the United Kingdom on 9 May 2018
Verified Purchase
A real roller coaster of a tale that pulls a lot of threads together.
Read more
Report abuse

nicola steinhardt
5.0 out of 5 stars Great series
Reviewed in Spain on 13 December 2018
Verified Purchase
Having finished the end of the war series(I have preordered the last book) I was looking for something new to read and found the first book in this series. In the last two weeks in any minute of spare time I have had I have read the three books. They are a wild unimaginable tale but great reading. Try the first one you will be hooked. Looking forward to the spin offs
Read more
Report abuse

Rd2win
5.0 out of 5 stars Awesome like always
Reviewed in the United States on 12 March 2018
Verified Purchase
I want to start by saying outside of Mark Tufo, Angela White is a stop everything I’m doing and read her books. The only reason Mr Tufo is ahead of her is because I found him first. The Bachelor battles series is one of the most unique books you can read. It’s a must read.
Read more
3 people found this helpful
Report abuse
See all reviews
Back to top
Get to Know Us
Make Money with Us
Let Us Help You
And don't forget:
© 1996-2021, Amazon.com, Inc. or its affiliates