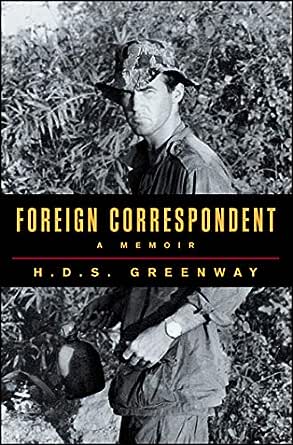 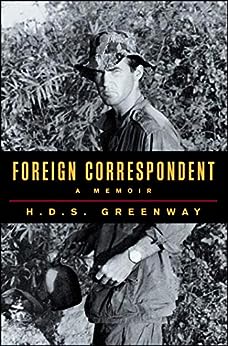 "Greenway has taken a second crack at a 'first draft of history' and given us a riveting, smart memoir filled with anecdotes and observations that come from years of reflection. He lets us in on the great secret of a war correspondent. A story is always more devious and complicated than the one written on deadline. Greenway now gives us the real scoop with humor and intelligence; a perspective that comes from mining his dog-eared reporter's notebooks, some still flecked with dried blood and sweat. He has found remarkable stories. In the White House on the day of the Kennedy assassination, on the last flight out of Vietnam from the roof of the US embassy, Greenway was an eye-witness to momentous events. Fast-forward to Kabul and Baghdad where he observed the chaos of capitals collapsing into civil war. Greenway expands on the skills of a gifted war correspondent to write his personal account of remarkable history."--Deborah Amos, author of Eclipse of the Sunnis "Kirkus Reviews"

"Greenway is one of America's greatest reporters. Covering the wars in Vietnam, the Middle East, and the Balkans with courage and honesty, he set the standard which many others seek to meet. It is a gift that he has now written his long overdue memoir. Gripping, lucid, thoughtful, it will be a classic. It should encourage another generation to follow his lead--to go out and discover and tell the truth about difficult decisions in distant, dangerous places and honor the profession of journalism."--William Shawcross, author of Sideshow and Justice and the Enemy "Kirkus Reviews"

"Greenway stands out among veteran correspondents for the range of his experience and his gifts as a raconteur. He is a splendid companion. Foreign Correspondent is packed with adventures and close calls. It is also an inquiry into why American power so often goes awry."--Joseph Lelyveld, author of Great Soul "Kirkus Reviews"

"Greenway's firsthand experiences add gravitas to his common-sense take on foreign policy. The real strengths of the book, however, are the vivid descriptions of life during wartime."--Washington Post "Publishers Weekly"

"Passages such as that one--and there are indeed others--are what elevate 'Foreign Correspondent' well above the run of the journalistic mill. It's easy for journalism to turn one into a cynic, but Greenway seems not to have succumbed."--Washington Post "Jonathan Yardley"

"The central story of our time, David Greenway writes, is of 'America stepping into other people's empires.' Greenway spent a half-century covering that story with insight, panache, and no small amount of courage. In this vividly written memoir, ranging from Southeast Asia to the Middle East, he recounts his adventures and misadventures, while deftly portraying the cast of colorful characters--above all his fellow foreign correspondents--encountered along the way. The result is a riveting book."--Andrew J. Bacevich, professor of history and international relations, Boston University "Kirkus Reviews"

"This is more than a memoir . . . it is a sophisticated modern history, with all of our foreign policy ignorance and misunderstanding etched in printer's ink. Greenway, whose reportage and later columns were always essential for people in my business, reminds us of what we are missing in these days of dwindling American interest in foreign affairs and dwindling coverage. How many Americans even know where foreign is? The guy always had information, guts . . . and style . . . and now he has produced an essential running commentary of our time."--Seymour Hersh, author of The Dark Side of Camelot "Kirkus Reviews"

"With an astute sense of the broader history behind conflicts, Greenway explores the harrowing process of shaking off colonial European powers and fighting for freedom and independence. ... [A] fascinating look at one man's career and 50 years of war, violence, and adventure."--Washington Post "Booklist" --This text refers to the paperback edition.

H.D.S. Greenway has reported from 96 countries, and covered conflicts in Pakistan, Afghanistan, Bangladesh, Lebanon, Israel, Iraq, Vietnam, Cambodia, Laos, and the former Yugoslavia. He has been a contributing columnist for The Boston Globe, The International Herald Tribune, and Global Post, and has been a foreign correspondent for The Washington Post and Time magazine. He lives with his wife, JB Greenway, in Needham, Massachusetts. --This text refers to the paperback edition.

4.2 out of 5 stars
4.2 out of 5
27 global ratings
How are ratings calculated?
To calculate the overall star rating and percentage breakdown by star, we don’t use a simple average. Instead, our system considers things like how recent a review is and if the reviewer bought the item on Amazon. It also analyses reviews to verify trustworthiness.

michael d. mosettig
4.0 out of 5 stars David Greenway gives journalistic professionals and those who follow the ...
Reviewed in the United States on 19 October 2014
Verified Purchase
David Greenway gives journalistic professionals and those who follow the news some well told and rare insights into the world of journalism and especially that special world of foreign correspondence. I was particularly struck by his observation that the correspondents in Vietnam developed an emotional attachment to that country, something that certainly did not happen to those who followed in Iraq. One can only hope this book is not some kind of obituary, in a journalistic world turned upside down by technology and economic forces, for the kind of foreign correspondence that has served millions of Amiercan readers so well in the decades since World War II. A treat of a book.
Read more
4 people found this helpful
Report abuse

Fedoradude
4.0 out of 5 stars I liked it!
Reviewed in the United States on 13 October 2015
Verified Purchase
Another reviewer shagged this book as "just plain boring." Mmmm. Not sure I can agree with that.

Granted, this book doesn't have the spellbinding adventure of maybe Caputo's or Faast's stories but still very interesting background information about the various conflicts he covered and about the regions he covered them in and the politics that surrounded each.

If anything, I wish he'd've included more pictures, but I thought it was a pretty good read.
Read more
One person found this helpful
Report abuse

Dennis Endicott
5.0 out of 5 stars News from the treanches
Reviewed in the United States on 22 April 2015
Verified Purchase
I was impressed with this auto-biography! Greenway spent his life in the real life world of war correspondent and cast a lot of wisdom on the geo-politics that have formed our lives. John LaCaire used him as the basis of his character protagonist in the Honorable School Boy. I was very pleased and should be a good read for the baby boomers who lived most of this mans reporting history.
Read more
One person found this helpful
Report abuse

heffk
5.0 out of 5 stars Eyewitness account. Recommend it.
Reviewed in the United States on 19 January 2019
Verified Purchase
Author is father of my daughters friend and was happy to receive it quickly, in excellent condition. Thank you.
Read more
Report abuse

Amazon Customer
5.0 out of 5 stars Wonderfully written and easy for the reader to "feel" the ...
Reviewed in the United States on 2 December 2014
Verified Purchase
Outstanding view of the world and its areas in conflict through the eyes of a fearless correspondent. The reader travels with him and his family throughout the agony of Vietnam and Asia. Wonderfully written and easy for the reader to "feel" the difficulty that he had as he moved from place to place. A great read!!
Read more
One person found this helpful
Report abuse
See all reviews
Get FREE delivery with Amazon Prime
Prime members enjoy FREE Delivery and exclusive access to movies, TV shows, music, Kindle e-books, Twitch Prime, and more.
> Get Started
Back to top
Get to Know Us
Make Money with Us
Let Us Help You
And don't forget:
© 1996-2020, Amazon.com, Inc. or its affiliates