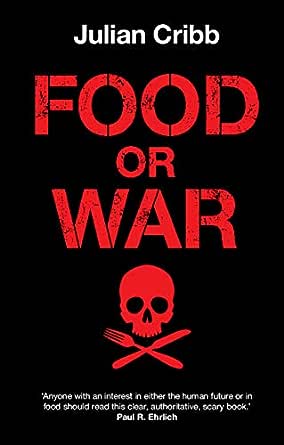 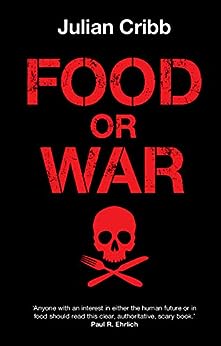 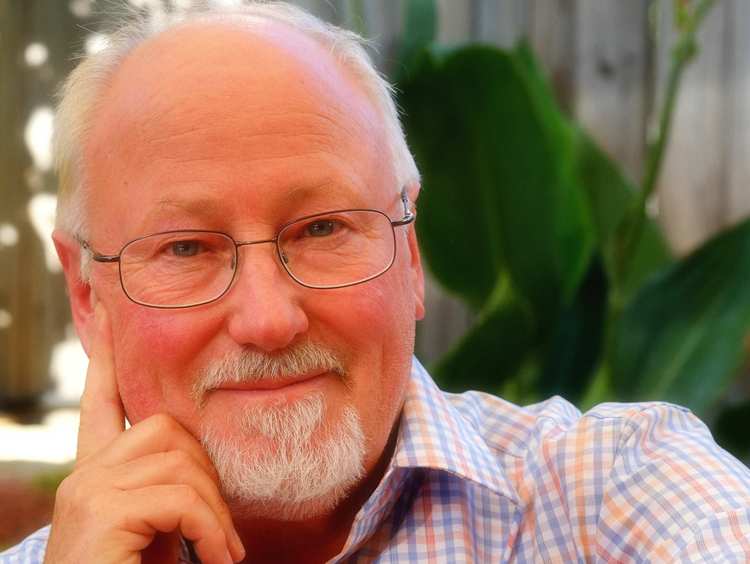 '… today's unsustainable food systems and the impossible job of feeding the estimated 10 billion people inhabiting the planet by 2050 encapsulates the multiheaded crisis humanity faces today. If you haven't heard all this then Food Or War is a good primer, vivid and punchy.' The Observer

'Perchance, ecosystems cease to function, the human jawbone would plop open, and remain plopped open, gaping and, over time, morph into a zombie-like end game of people preying upon people. … All of which serves as a prelude to Julian Cribb's brilliance as an established and celebrated science writer, recipient of 32 journalism awards, and author of ten books, with a new 'first-rate' book, now available via pre-order: Food or War. … Food or War is not only a page-turner with Cribb's clear, precise prose, but as an added bonus, it's jam-packed, like a textbook, with significant facts and statistics about the biosphere. It belongs in the hands of people who deeply care about the deteriorating condition of our poisoned planet. Incidentally, based upon very compelling evidence, yes, it is poisoned.' Robert Hunziker, CounterPunch

'Food or War offers us the context we need to consider the food we eat, the approach we use to raise food, and the manner we treat others' resources across the globe in new, revealing, and common sense ways.' Carolyn Fortuna, CleanTechnica (www.cleantechnica.com)

'Wars rage on in Syria, Yemen and elsewhere, in part driven by food shortages. What to do? … We can turn this imbalance around. Cribb points the way in this must-read book.' Tim Fischer, former Deputy Prime Minister of Australia, and Chair of the Global Crop Trust with Seed Vault in Svalbard and HQ in Bonn, Germany

'Access to this book will enrich deliberations on critical issues of global food supply, dealing with refugees and poverty, and the food/land/water nexus. The evidence-based approach, integration across issues, and presentation of opportunities for the future make this text stand out from the crowd. It is highly recommended.' Kath Bowmer, former Deputy Chief of CSIRO Land and Water and Deputy Vice Chancellor of Charles Sturt University, Queensland

'Throughout history, food has been both a tool and a consequence of conflict and migration, which continues today exacerbated by arable land lost to cities, unreliable climate and excess consumption in rich nations while millions remain malnourished elsewhere. Cribb's analysis is urgently apposite, as is his practical call for a sustainable, nourishing and resilient global food system.' Lindsay Falvey, University of Melbourne

'Drawing on his extensive scientific and historical knowledge, Cribb takes us on a grim and tightly argued odyssey to the edge of the Earth. He holds our hand while we stare into the abyss. Frightening. Having outlined the reality of our tenuous hold on the supports of life, he offers creative and imaginative solutions. A must-read for anyone who cares about the future of humanity.' Bruce Haigh, former Australian diplomat and refugee advocate

'In a time when we are absorbed in populist, political nonsense, Julian Cribb brings us to heel with the existential threat we face, in simple language; he joins all the dots.' The Honourable John Kerin, former Australian Minister for Primary Industry

Ours is the Age of Food. Food is a central obsession in all cultures, nations, the media, and society. Our future supply of food is filled with risk, and history tells us that lack of food leads to war. But it also presents us with spectacular opportunities for fresh human creativity and technological prowess. Julian Cribb describes a new food system capable of meeting our global needs on this hot and overcrowded planet. This book is for anyone concerned about the health, safety, affordability, diversity, and sustainability of their food - and the peace of our planet. It is not just timely - its message is of the greatest urgency. Audiences include consumers, 'foodies', policymakers, researchers, cooks, chefs and farmers. Indeed, anyone who cares about their food, where it comes from and what it means for them, their children and grandchildren.
See all Product description

Jeff and Tonya
1.0 out of 5 stars Insane Conspiracy Theories Bring Every Other Claim Into Question.
3 October 2019 - Published on Amazon.com
I *wanted* to like this book. I *really* did. The premise is something I'm interested in and could see happening - if we do not solve the global food system and make it truly sustainable for billions of people, the food crises resulting from our failure to solve this problem *will* lead directly to war.

But in Chapter 4 in particular, and in particular the section of Chapter 4 regarding "Food or Poison", the author seriously espouses several claims that are truly nothing more than conspiracy theories claimed only by the truly scientifically illiterate, such as that autism, male infertility, depression, and even gender identification are caused by chemicals in both pesticides used in growing food and in the packaging used to store and present food.

The fact that the author would even seriously consider such claims, much less try to seriously propose them, brings into question literally every other claim that the author makes throughout this book, and thus this book must be given 0 stars - it is absolutely not worthy of human consumption.

Hell, Jeremy Robinson's book HUNGER, a fiction tale wherein world hunger is solved via genetic modification that then turns everything that eats the modified food into monsters - is more believable than this purportedly nonfiction tale.
Read more
4 people found this helpful

Geoffrey Holland
5.0 out of 5 stars A Wake-Up Call - Highest Recommendation
11 October 2019 - Published on Amazon.com
“Of the 68.5 million refugees worldwide in 2018, the vast majority were fleeing hunger.”
“…hunger is often the spark that ignites the powder keg of popular outrage and precipitates the fall of government.”
In just the past fifty years, the human population has doubled to nearly eight billion, with an additional 75 million being added to that total every passing year. Given those stark numbers, food insecurity now stands as perhaps the most urgent of a cluster of unprecedented, existential threats that loom over human life on Earth.
Science journalist Julian Cribb is a gifted communicator. With engaging style and a mass of unassailable facts, he reveals that food insecurity, driven increasingly by climate change, is already impacting tens of millions of people, and could become much, much worse in the decades ahead. Hunger leads to desperation, often with fatal outcomes, and it’s happening now on a massive scale
Fortunately, the news is not all bad. Author Cribb offers reassuring perspective on new food technologies, and bold steps humanity can take to mitigate the threat of hunger. He shows that saving ourselves from ourselves requires a fundamental rethinking and reordering of the way we produce food and feed ourselves.
Food or War does an excellent job of making the food security issue accessible to readers. Humanity can weather this storm, but it’s going to take serious commitment on a global scale.
Food or War is a must read.
Read more
One person found this helpful

JustLikeHollyGolightly
5.0 out of 5 stars Terrifying, but a must read
11 October 2019 - Published on Amazon.com
Food is one way that humans can have a substantial impact on issues such as climate, conflict extinction and mass toxicity. This book shows how by choosing how and what we eat, we are also choosing what kind of a world our grandchildren are going to inherit. Is it a lively, abundant world, or a world destroyed by wars and technology?

While I can see how Cribb's thoughts on women being more cautious because they are preparing the world for their children, while men are the ones who start wars, can be controversial, I agree with him, and think he's really brave for saying so.

I found the chapter about chemicals especially scary. Cribb quotes Jane Goodall: "Someday we shall look back on this dark era of agriculture and shake our heads. How could we ever have believed that it was a good idea to grow our food with poisons?"

I really liked the conclusion of the book and how Cribb helpfully lists the key recommendations in the book. This is a short book, and can be read in a few hours, but best to read it slowly and digest each of Cribb's pieces of advice one by one.
Read more
One person found this helpful

DH
4.0 out of 5 stars A Great Overview of Existential Risk
4 October 2019 - Published on Amazon.com
When desperate human need meets destructive human nature, food and war collide with terrible results. Julian Cribb marshalls the facts and proposes what to do on the individual and collective level to slow down two of the four horsemen, famine and aggression. Well worth considering.
Read more
2 people found this helpful

Martyn C.
5.0 out of 5 stars Our future foretold - and forearmed
8 October 2019 - Published on Amazon.com
Unputdownable. Dealing with the multiple threats to humanity’s most basic need, food, it unceremoniously pulls your head from the sand – but empowers you with the knowledge to do something. Brad Collis, author Fields of Discovery, Australia’s CSIRO
Read more
2 people found this helpful
Go to Amazon.com to see all 5 reviews 3.8 out of 5 stars
Get FREE delivery with Amazon Prime
Prime members enjoy FREE Delivery and exclusive access to movies, TV shows, music, Kindle e-books, Twitch Prime, and more.
> Get Started
Back to top
Get to Know Us
Make Money with Us
Let Us Help You
And don't forget:
© 1996-2020, Amazon.com, Inc. or its affiliates