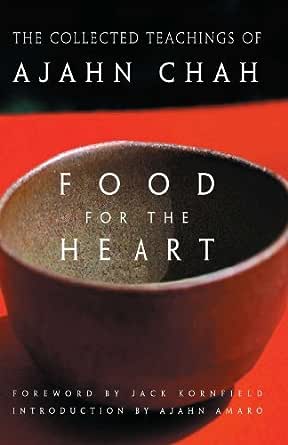 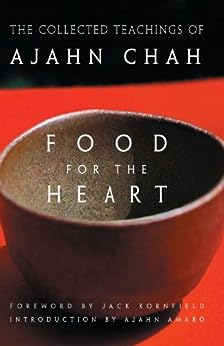 Food for the Heart: The Collected Teachings of Ajahn Chah Kindle Edition

"Ajahn Chah spoke no English, yet his deep clear teachings motivated thousands of Westerners to embrace the simple profundity of living Buddhism. In this book, you'll find Ajahn Chah's unique wisdom, which shone brilliantly from the stillness of his mind. These words will inspire, guide, and liberate you. It is Buddhism at its best."--Ajahn Brahm, author of Who Ordered This Truckload of Dung?

"Ajahn Chah's teachings are simple, clear and profoundly helpful. This book is a great contribution to the Dharma in the West."--Joseph Goldstein, author of A Heart Full of Peace and One Dharma

"Ajahn Chah's words have the sharp sting, salty tang and sand-dry wit of the old Zen masters. They will provide illumination and inspiration for all students of Buddhism."--Jan Chozen Bays Roshi, founding teacher at Great Vow Zen Monastery, and author of Jizo Bodhisattva

"This rich collection is a real treasure. Profound, direct, earthy, and often funny, Food for the Heart will be especially precious for practitioners of vipassana meditation in all Buddhist lineages."--Larry Rosenberg, author of Breath by Breath

"Ajahn Chah stands out as a profound teacher in the best of Buddhist wisdom traditions. Compassionate, lucid, and far beyond any sectarian categorizing, Food for the Heart is all that and more. This humble and down-to-earth forest monastic has given us all a work which will stand the test of time with the world's great classics of spiritual literature. An important volume for all serious followers of the Way."--John Daishin Buksbazen, author of Zen Meditation in Plain English

"Ajahn Chah was a prominent teacher in the Thai forest-dwelling tradition. Beginning in the mid-sixties, many Western students, including Jack Kornfield, studied with him at Wat Pa Pong. This anthology arrives on the tenth anniversary of Ajahn Chah's death. The talks in it cover a wide range of dharma topics, and have been skillfully translated and edited to preserve the vibrancy, directness and humor that he was known for. Though Ajahn Chah taught for over thirty years, his talks, unfortunately, were not systematically recorded and transcribed, which makes this collection from Wisdom all the more precious."--Shambhala Sun

"Like an expertly prepared and artistically presented feast, this compilation of Ajahn Chah's talks offers a tasty treat for just about anyone traveling the path to freedom. We see a master at work: Ajahn Chah offers teachings in his signature no-nonsense style, using simple language, humor, and delightful similes. One feels lifted up by the strength of his character, his unfailing confidence in dhamma, and by his earnest encouragement. This is one of those books that can be opened to any page to find a wise teaching. And at its end, one comes away with the feeling of having enjoyed a great meal."--Inquiring Mind

"The Buddhism practiced in northern Thailand has grown in popularity in part because of its gifted leader and speaker, the late Ajahn Chah. This compilation of his talks extols the virtues of practice and makes judicious use of the technical vocabulary of Buddhism. Ajahn Chah's humorous, analogy-laden narration of his tradition's practice--a practice that is basic and almost reductionistic, similar to modern Zen--makes these teachings accessible to beginners and appealing to serious practitioners. A valuable collection of the Thai Buddhist master's thoughts."--Publishers Weekly

"Ajahn Chah's wisdom, charisma, and simple teachings have had a profound effect upon the development of the Vipassana community in the West. Published on the tenth anniversary of his death, this collection brings together for the first time the dhamma talks of Thailand's best-known meditation teacher and forest monastic, talks previously available only in rare or limited editions. It presents Ajahn Chah's teachings on meditation, liberation from suffering, calming the mind, enlightenment, and the 'living dhamma'."--Tricycle

Ajahn Chah (1918-92) was part of a movement to establish simple monastic communities in the remote forests of Thailand. At this date over one hundred forest monasteries have been established that look to his teaching as their inspiration. Ajahn Chah's simple yet profound style of teaching has a special appeal to Westerners, and in 1979 the first of several branch monasteries in the West was established in England, and there are now more than ten monasteries in the United States, Europe, Australia, and New Zealand. Ajahn Amaro is abbot of the Amaravati Buddhist Monastery in southeast England and author of numerous books and articles on Buddhist themes across traditions. Born in England in 1956, Ven. Amaro received his BSc. in Psychology and Physiology from the University of London. He studied Buddhism in Thailand in the Forest Tradition and was ordained as a bhikkhu by Thai meditation master Ajahn Chah at Wat Pah Nanachat in 1979. He returned to England and joined Ajahn Sumedho at the newly established Chithurst Monastery. He resided for many years at Amaravati Buddhist Monastery in England, and in 1996 he established Abhayagiri Monastery in Redwood Valley, California. He lived there until 2010, when he was called back to Amaravati to assume the duties of abbot. Jack Kornfield co-founded the Insight Meditation Society in Barre, Massachusetts, in 1975 and later the Spirit Rock Center in Woodacre, California. He holds a PhD in clinical psychology. His books include After the Ecstasy, the Laundry and the national bestseller A Path with Heart. --This text refers to an alternate kindle_edition edition.

4.8 out of 5 stars
4.8 out of 5
96 global ratings
How are ratings calculated?
To calculate the overall star rating and percentage breakdown by star, we don’t use a simple average. Instead, our system considers things like how recent a review is and if the reviewer bought the item on Amazon. It also analyses reviews to verify trustworthiness.

Nazboy
5.0 out of 5 stars Essential Guidance for Serious Practioners
Reviewed in the United Kingdom on 25 November 2013
Verified Purchase
I have been studying The Dharma and meditating for several years and have found this to be one of the most perfect guidebooks I have read. For those who don't know; Ajahn Chah is a famous monk in the Thai Forest Tradition of Therevada Buddhism. He was ordained as a Buddhist at the age of 20 and dedicated his entire life to following the teachings of the Buddha. He taught many well-known monks (such as Ajahn Brahm and Ajahn Sumedho) who have since gone on to set up successful Buddhist Centres across the world.

I purchased this book based on a recommendation from a fellow meditator whom I met on a retreat and have used it consistently alongside my practice for the last few months, digesting the teachings slowly and putting them in to practice. I must say that the teachings have really helped me to progress a lot both in learning how to work with the mind and with my understanding of the most important aspects of Dharma. The style of teaching here is remarkably simple yet extremely profound. Ajahn Chah expounds on all the common issues that serious meditators face when on the cushion such as understanding sensations, letting go, observing the mind, attaining mental balance, right attitudes to practice etc. Some familiarity with Buddhist teachings may be beneficial to make full use of the book, however explanations are given throughout of the most important aspects such as Precepts, Noble Truths, The Characteristics, Aggregates etc, all explained thoroughly. In particular I found the descriptions on handling mental defilements to be particularly brilliant as they cleared up a lot of confusion that was obstructing my progression.

If you are looking for a beginners manual I would probably look elsewhere first (Breath by Breath by Larry Rosenburg or Mindfulness Bliss & Beyond by Ajahn Brahm are excellent). But if you already have a good grounding in Buddhist teachings and maybe a few years practical experience under your belt then I couldn't recommend this book highly enough.
Read more
15 people found this helpful
Report abuse

Fernando Menendez Osorio
5.0 out of 5 stars Essential
Reviewed in the United Kingdom on 18 July 2012
Verified Purchase
Throughout the years I have read many books about Oriental thought and philosophy. Actually there are many "so called" enlightened people writing spiritual books about this matter. Some are good and some are just published with the intention of economic profit. Ajahn Chah's book "Food for the heart" is a "must read" for anyone interested in buddhism or the spiritual path. The teachings are spot on, clear and written in a style that he seems to be talking directly at you. Is the kind of book to read over and over again because I,m sure, every time you do, you will find new and enlightened thoughts to help you in your way.
The words of a true master available. I really recommend it!!
Fernando M.Osorio
Read more
7 people found this helpful
Report abuse

Star
5.0 out of 5 stars Lovely book.
Reviewed in the United Kingdom on 21 February 2019
Verified Purchase
This book is full of Ajahn Chah's teachings and is well worth reading. It's nice to read a little each day, then sit and meditate and take in the teaching.
Read more
Report abuse

peter
5.0 out of 5 stars Ajahn chah
Reviewed in the United Kingdom on 5 January 2019
Verified Purchase
Absolute must have,so insightful,rational and compassionate
Read more
Report abuse
See all reviews
Get FREE delivery with Amazon Prime
Prime members enjoy FREE Delivery and exclusive access to movies, TV shows, music, Kindle e-books, Twitch Prime, and more.
> Get Started
Back to top
Get to Know Us
Make Money with Us
Let Us Help You
And don't forget:
© 1996-2020, Amazon.com, Inc. or its affiliates