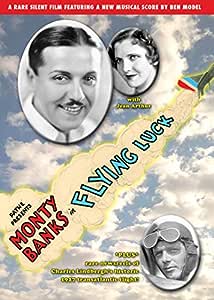 Monty Banks wants to be like his hero Charles Lindbergh, and will do anything to learn to fly a plane. After building his own doesn't go so well, he winds up enlisting in the Army. During basic training, Monty falls in love with the Colonel's daughter (played by a young Jean Arthur), tangles with a mean drill sergeant (Kewpie Morgan) and is mistaken for a visiting French dignitary. But eventually Monty winds up in a plane and wins the big Army-Navy air polo match! On May 20, 1927 Charles Lindbergh successfully performed the first transatlantic solo flight, captivating the nation, if not the world... and inspired Monty Banks to make this aviation-themed comedy feature. Flying Luck co-stars a young Jean Arthur (Easy Living, Mr. Smith Goes to Washington, Shane). This extremely rare silent film has never been available on home video, and is seen here in a transfer from a rare, vintage 35mm nitrate print. Monty Banks entered films in 1916 and, after supporting other comedians for a few years, had a successful series of starring shorts from 1920 to 1924. Banks is probably best known for the climactic reels of his thrill comedy feature Play Safe (1927), which were featured in Robert Youngson's compilation movie The Days of Thrills and Laughter (1961). BONUS: This DVD includes 40 minutes of newsreels covering Lucky Lindy's infamous flight from New York to Paris. Region 0. [Note: This product is an authorized, licensed DVD and is manufactured on demand]

Joe Migliore
4.0 out of 5 stars A Rare Treat!
4 April 2014 - Published on Amazon.com
Verified Purchase
At last Monty Banks' silent feature FLYING LUCK is available on DVD. For those unfamiliar with Banks, he was one of the great comedians of the silent era, who is today forgotten. While some of Banks' short subjects have found their way to DVD (Grapevine video has a collection), I believe this is his first feature to do so. Lindbergh's famous flight is referenced throughout, as Monty plays a pilot joining the army. Running a full hour, this is a good introduction to Monty Banks for the uninitiated. Perhaps the future will bring some of his other features to DVD, like ATTA BOY or PLAY SAFE. In any case, we have FLYING LUCK, so we can enjoy it...and I suspect you will.
Read more
9 people found this helpful

Rick Lanham
5.0 out of 5 stars Rare comedy now available for us
4 May 2014 - Published on Amazon.com
Verified Purchase
Lots of effort went into bringing us this rare film and I appreciate it. Although I'm familiar with lots of silent films, the name Monty Banks had escaped me. I thoroughly enjoyed the musical score which was appropriate and added immensely to the film. The "gags" seemed a little familiar a few times, but over-all a very good comedy. I also was glad to have the chance to see Jean Arthur in one of her earlier films. I had heard on Nitrateville that there was a reported problem with the disc's soundtrack, so I listened for that. My copy did not have this problem. I watched both the film and the Lindbergh newsreel extras.
Read more
6 people found this helpful

Films Collar
5.0 out of 5 stars Mr. Model's Magnificent Movie Music
4 April 2014 - Published on Amazon.com
Verified Purchase
Should there be another Oscar presented to a saviour of silent films-
let's call it the "Brownlow Award"- may it go to Mr. Benjamin Model.
His expertly performed scores provide, in this instance,
the perfect accompaniment for
1. An unjustly neglected comedian -Monty Banks- and comedy-Flying Luck.
2. Three bonus Charles A. Lindbergh vintage newsreels.
Highly recommended.

Dave Glass
5.0 out of 5 stars Flying Luck Flies High!
26 April 2014 - Published on Amazon.com
Verified Purchase
Monty Banks was a big comedy star in the 1920s and apart from starring in dozens of shorts, he made a number of top feature films too.
FLYING LUCK isn't the best feature he made but it IS very entertaining (and VERY rare!). The 35mm print is in pretty good shape and, amazingly, it's the only MONTY BANKS feature to have been released (so far) on DVD.
His superior features, ATTA BOY and PLAY SAFE, both reside at the Library of Congress and are crying out for DVD release (hey Ben, how about a Kickstarter?!)
Humungous congrats and respect to the powerhouse Ben "fingers" Model, as well as Bruce Lawton and the other guys who helped get this in front of our eyeballs.
Read more
3 people found this helpful

Frank Commins
5.0 out of 5 stars A Rare Treat To See An Unjustly Overlooked Comic
3 May 2014 - Published on Amazon.com
Verified Purchase
Although he was a solid second or third tier comedian during the silent era, aside from a few short subjects, most of Monty Banks' films remain unavailable today. Fortunately, that oversight has been remedied with the release of 'Flying Luck', a solid piece of entertainment which is sure to delight not only film aficionados, but also anyone interested in early aviation. It's a first rate production, aided immensely by a whimsical story-line, and professionally handled by a score of talented character actors from the apex of the silent era, as well as an incredibly young and beautiful Jean Arthur, who would shine even brighter during the sound era ("Mr. Smith Goes To Washington", "Shane", and many others). The source material for this film, and the DVD transfer are of high quality, with a snappy musical accompaniment that complements the action perfectly. An added bonus is the inclusion of rare newsreel footage documenting Charles Lindbergh, and his groundbreaking 1927 transatlantic flight. Don't pass up an opportunity to pick up this rare reflection of Americana. The subject matter encompasses a fascinating era of history which turned the world on its heels.
Read more
2 people found this helpful
Go to Amazon.com to see all 8 reviews 4.7 out of 5 stars