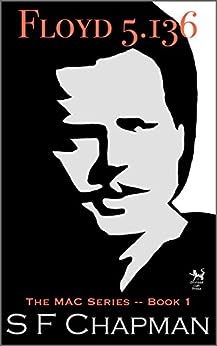 Marta Cheng
3.0 out of 5 stars A Fresh Spin on a Sci-Fi Story
Reviewed in Canada on 12 May 2015
Verified Purchase
Floyd and Mia are both MACs; Mildly Altered Clones of their former selves, each new version altered slightly to avoid the genetic imperfections that plagued their former selves. However, their memories remain intact. Marie’s role is to “unwrap” each new cocoon when it’s ready and both Floyd and Mia have history and memories of a personal relationship that had once sadly gone nowhere. Enter Marie, a striking young woman – and the first new individual to be cloned in a long time. Floyd 5.136 is certainly a bit different from the usual sci-fi fare. The author Chapman has taken a great deal of pains to give his characters dimension and feelings, not easily done, especially in this particular genre and while the concept of cloning is hardly new, the author puts a decidedly fresh spin on it, making for a solid read. However, if there is something negative to be said about Floyd 5.136, it would have to be the beginning of the book, which could have been better rounded in order to better set up both the characters and the story line. Each genre has its own set of challenges and sci-fi is certainly no different. In science fiction, an author creates their own unique universe, expecting that his or her readers will “buy into” their universe. However, that’s only possible when that universe is fully articulated from the very beginning so that the readers can not only picture it in their minds but actually inhabit that alternate universe. It’s only then that the readers can become fully invested in the story upon which they are about to emark. This would certainly have enhanced an otherwise good story.
Read more
Report abuse

Reggie
5.0 out of 5 stars A well thought out science fiction story.
Reviewed in the United States on 3 April 2015
Verified Purchase
Floyd 5.136: The MAC Series -- Book 1
This is the First book written by S F Chapman but not his first published.
Mac series. Mac = Mildly Altered Clone.
Marie one of the main characters in this thought-provoking story about the cloning of humans, in this fast moving science fiction story, is the first new person to be cloned in thousands of years. All other cloning, had simply been reproducing the previous old version to a newer version with the original memories retained.

The life of the residents in this novel are changed due to part, by the cloning of Marie. There are many exciting twists and turns as the plot moves along to the eventual conclusion.

A well thought out story, which I think would be a great read for all ages, and an interesting look into the possible future of the human race. I would certainly recommend the reading of this book and look forward to continuing the story in the next of the series.

Catherine Grainger
5.0 out of 5 stars Wonderfully Executed Sci-fi
Reviewed in the United States on 28 April 2015
Verified Purchase
Floyd 5.136 by S F Chapman
I was pleasantly surprised by how much I enjoyed this book, as sci-fi dystopia is not what I typically prefer, genre-wise. However, Floyd 5.136 is intriguing, a wonderfully fresh take on a prolific and difficult genre. The characters in this book are captivating and extremely well developed, much like the rest of the story, but how they are written is the true gem. The writing style is amazing. Vivid imagery and intriguing characters without any superfluous filler. Each word is chosen with precision and care to deliver the highest impact. The plot is captivating, the lives that these seven clones have been living over and over for thousands of years change suddenly when a completely new person is created. The different twists and turns that this causes keeps the reader enthralled, and will keep them coming back for more. This is most definitely a novel that readers of any age will greatly enjoy.
Read more
One person found this helpful
Report abuse

M. E. Hemphill
4.0 out of 5 stars Fantastic world-building, but writing needs work
Reviewed in the United States on 16 August 2015
Verified Purchase
I was given a copy of this book in exchange for an honest review.

This is the first book in an ongoing science-fiction series based in the far future. The world Floyd and his comrades inhabit is novel, interesting, and mysterious. The beginning was a little slow, but the characters soon came into their own and the story got rolling. And it was a good story, I dare say.

Now, the writing. First of all, this book needed an exhaustive editing, and for reasons I don't know, it didn't get one. Typos abounded. The text was absolutely rife with comma splices and other punctuation errors. Those things do happen, but the mistakes were frequent enough to be very, very distracting.

So, I guess what I want to say is this: Chapman's creativity shines through brilliantly. The settings are vivid and just the right amount of strange and other-worldly. Unfortunately, the gleam of this brave new world is majorly tarnished by the poorly-edited writing. I would still recommend the book, but anyone who wants to tackle it should just be aware that there are some road bumps.
Read more
2 people found this helpful
Report abuse

Grady Harp
5.0 out of 5 stars `Every object and event must have a plausible chain of causality that leads to it.'
Reviewed in the United States on 12 April 2015
Verified Purchase
Northern California author SF Chapman must be feeling richly fulfilled. Of all the many people who dream of writing `the novel', he has succeeded. Though it may not have been under the best circumstances (his loss of employment when the 2008 recession paralyzed the workforce of the country), Chapman took advantage of a critical change and returned to a long held dream to become a writer: the seeds of that dream had been present but simply viewed as an `unrealistic' a career for many years. Now that he has started writing, the authorial juices are flowing and he is making statements in the form of stories about human frailties and strengths, natural disasters, and that seductive genre of science fiction - the way to step away from a world that is plagued with problems in these tenuous times. What makes SF Chapman succeed in his writing (and this reviewer has read his first three books I'M HERE TO HELP, THE RIPPLE IN SPACE-TIME and TORN FROM ON HIGH) is the quiet simplicity in the way he unfolds his stories. He finds the language pertinent to each character, knows how to build momentum, and understands that resolution of a story's message can truly be only in the effect it has on the reader: he honors that concept well. From the author's Info we discover that `S F Chapman has done it all: truck driver, scientific glass blower, construction worker and second grade science lecturer. He's a computer geek, handyman, music lover and relentless tinkerer. But he's most passionate about his latest venture' - rapidly writing books that tend to dwell in the sci-fi dystopia.

Chapman began writing this book in 2009 and that makes the content even more meaningful - the manner in which he takes ideas now germinating (Genetic Engineering) and making a sci-fi story that is growing closer to reality daily. The Introduction, beautifully sculpted, captures our attention and explains the title: `They were ordinary people: A visual artist, an engineering student, an assistant secretary, an unemployed carpenter, a schoolteacher, a wealthy restaurateur and a roaming surfer. They had very little in common and likely would never have come upon each other were it not for the novelty of their propagation. Late in 2034, all were conceived as some of the very few Mildly Altered Clones that would ever be produced. They appeared to be no different from those around them but, by the time that they matured into early adulthood, each had suffered thorough the harassment and intolerance that is too often heaped upon those of uncommon lineage. By chance, a Genetics Researcher had come upon the names and particulars of these Mildly Altered Clones and sought them out for an astonishing new project. Many thousands of years later the engineer, the secretary, the artist, the surfer, the teacher, the restaurateur and the carpenter finally met. Amongst the first few questions that they asked of each other was this: "Where are we?"

We discover the lead character in an intoxicating way: `Floyd Bernal had been a human clone for thousands of years. For reasons that no one really understood, the astonishing mound of cottony material that encased him periodically duplicated his memories and body to produce yet another replica of Floyd. He and a half dozen other clones had labored for many millennia to live in their small world over which they had little control. Floyd 5 point something, he considered.'
Or as Chapman outlines, `Floyd stared with great interest at the slumbering young woman as she was slowly freed from the silky gray cocoon. She was quite striking Floyd realized. But more importantly, she was the first new person to be generated in more than fifteen thousand years! For eons, the strange fibrous life form known as "The Cotton" had regularly produced nearly innumerable copies of the same seven people. The group members lived rather ordinary lives and, when old age or accidents interceded, died ordinary deaths. But Floyd and his companions always started out in the same very unusual and unhuman-like way as cocoon-bound twenty-five year old adults in full possession of their past memories. Everything would change with the arrival of the intriguing young woman.'

Written with a strong polish and promising to be an ongoing series, Chapman has achieved that surety of position in this ever-tougher genre of fantasy/sci-fi - he has mastered it. Grady Harp, April 15
Read more
3 people found this helpful
Report abuse
See all reviews
Back to top
Get to Know Us
Make Money with Us
Let Us Help You
And don't forget:
© 1996-2021, Amazon.com, Inc. or its affiliates