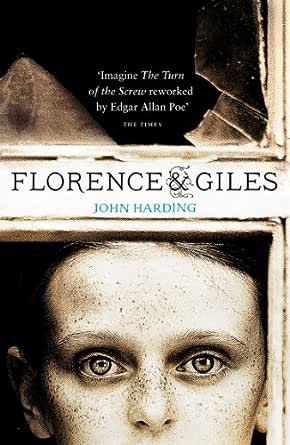 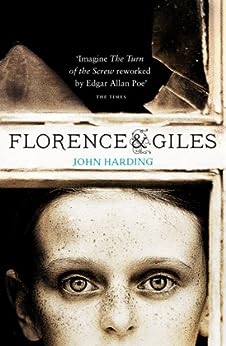 'Harding rings enough ingenious changes on James's study of perversity to produce his own full-blown Gothic horror tale. The climax of their struggle… is genuinely exciting and shocking.' THE INDEPENDENT

‘Florence and Giles is an elegant literary exercise worked out with the strictness of a fugue: imagine Henry James’s The Turn of the Screw reworked by Edgar Allan Poe…Nothing prepares you for the chillingly ruthless but inevitable finale.’ THE TIMES

'A tight gothic thriller… The climax becomes unbearably tense. Florence feels the horror of her situation "cheese-grating" her soul, which is just how Harding leaves the reader feeling at the end of this creepily suggestive story.' FINANACIAL TIMES

‘Harding’s creepy, ingenious tale slyly wrongfoots the reader, and its deliciously sinister conclusion is the stuff of troubled nights.’ THE LADY

‘A good, clever, modern take on old-style American gothic; a creepy haunted house tale in which the living are just as eerie as any real or imagined ghouls.’ NEW ZEALAND HERALD

‘a scarily good story, in an arrestingly unusual narrative voice.’ THE OXFORD TIMES

1891. In a remote and crumbling New England mansion, 12-year-old orphan Florence is neglected by her guardian uncle and banned from reading. Left to her own devices she devours books in secret and talks to herself - and narrates this, her story - in a unique language of her own invention. By night, she sleepwalks the corridors like one of the old house's many ghosts and is troubled by a recurrent dream in which a mysterious woman appears to threaten her younger brother Giles. Sometimes Florence doesn't sleepwalk at all, but simply pretends to so she can roam at will and search the house for clues to her own baffling past.

After the sudden violent death of the children's first governess, a second teacher, Miss Taylor, arrives, and immediately strange phenomena begin to occur. Florence becomes convinced that the new governess is a vengeful and malevolent spirit who means to do Giles harm. Against this powerful supernatural enemy, and without any adult to whom she can turn for help, Florence must use all her intelligence and ingenuity to both protect her little brother and preserve her private world.

Inspired by and in the tradition of Henry James' s The Turn of the Screw, Florence & Giles is a gripping gothic page-turner told in a startlingly different and wonderfully captivating narrative voice.

Florence lives in a large house in upstate New York in the 1890s. Her parents have met tragic ends, so she and her half brother Giles live in their uncle's house. The uncle is not there, but his retinue of servants are quite capable of looking after the children. But owing to his own sad past, the uncle makes just one stipulation: Florence is to be denied any form of education. Giles, on the other hand, is allowed to go away to school for all the good it will do him.

No matter, Florence has secretly taught herself to read and has devised ingenious ways to access the forbidden books in the well stocked family library... Telling her story in a curious secret language (consisting principally of verbing any and every noun she can think of), Florence seems both odd and endearing. We feel for her; we despise the injustice of keeping a woman away from learning; we tremble as the servants threaten to stumble on her guilty pleasures.

V. Cano
3.0 out of 5 stars Interesting
25 October 2012 - Published on Amazon.com
Verified Purchase
This is a wonderful gothic novel, with all the requisite atmosphere and mystery, and with a protagonist who is wholly original.
I adore gothic novels and unreliable narrators and, in this book, we get both. The mood takes over the reader from the very beginning, weaving its spell until we are right there in the 1890s. Florence, our protagonist is a fabulous creation, with a vocabulary all her own and a way of narrating that makes for really fun reading. At first, her sentence structure was a bit jarring, but as the pages passed, and we get used to her voice, we feel like she is speaking just for us, in a highly confidential manner.
The story itself is fascinating, with lots of mystery, but I do have to say the ending was disappointing. There were so many plot points left dangling, so many situations that were built up throughout the whole book and then not solved. It was very disappointing. I'm not sure why the author thought the story would be better off without some answers. I realize Florence is an unreliable narrator, but even knowing that, there could have been ways to let the readers know a bit more about what really happened.
I did enjoy the book right up to the very end, so it is hard to say it's not worth reading. I don't know. Give it a chance, I suppose, and see what you think.
Read more
6 people found this helpful

Shawna Marie Johnson
2.0 out of 5 stars Too much talk not enough action
6 April 2015 - Published on Amazon.com
Format: Kindle EditionVerified Purchase
As a lover of post Victorian novels, I was excited to get my hands on this one and try out a new author and taste what he was serving. Unfortunately this dish was a bit cold and I just couldn't "eat it up". The story was rather slow moving so I settled back and tried to enjoy it, thinking that surely the pace would pick up some steam as I got further along. This never really happened though, and by the ending I was just annoyed and ready for it to be over. Also, the ending felt like a bit of a rip off considering all that the novel tried to built up to. Definitely not one of my favorites.
Read more
4 people found this helpful

MJZ
5.0 out of 5 stars Florence and Giles
28 May 2014 - Published on Amazon.com
Verified Purchase
A big thank you to Roland Orzabal, for mentioning this book. It turned out to be one of the most delightful things I've read in a long time. Florence and Giles is a gothic novel written from the view of an 11 year old girl who cooped up in an old estate finds her escape in the unused library. There she spends hours reading and educating herself as well as developing her own vernacular, while minding her younger brother of whom she is very fond of. The first half of the story is really quite charming, until the arrival of the governess, then things get creepy. The ending really surprised me and I found myself wishing that Mr. Harding would write a part II to this story. It would be interesting to see how Florence matures and how the events in this story shape her as she grows into adulthood. If you're looking for something a little different, your search ends with this book!
Read more
One person found this helpful

Dianne M. Stewart
5.0 out of 5 stars An atmospheric, amazing, satisfying read
27 March 2014 - Published on Amazon.com
Format: Kindle EditionVerified Purchase
I'm a little bit obsessed with this book, I will freely admit. It is just such a successfully realised story - so perfectly atmospheric, so filled with mystery, narrated in such a compelling voice - that it was an unparalleled joy to read. The story is inspired by The Turn of The Screw, and reading that first will enhance your appreciation of Florence and Giles but it is not a prerequisite. Florence's idiosyncratic way of speaking may be a little jarring to some people at first, but you quickly become accustomed to it and it really adds to the tone of the story in ways that become clearer as it progresses. It puts you firmly inside Florence's head, and that is a fascinating place to be. I wish the author John Harding would write a sequel to this book because that's a story just aching to be told (at the very least, I'm aching to read it)! All I can say is if you're a fan of gothic mystery and you like fascinating characters and atmosphere, then Florence and Giles is the book for you.
Read more

SusanB
5.0 out of 5 stars Not a ghost story
11 October 2016 - Published on Amazon.com
Verified Purchase
Not really a ghost story, this is a beautiully done psychological thriller. At first I didn't think i would get on with Florence's "special language" but
it grew on me and by the end I was completely understanding why Mr. Harding wrote it this way. I came to adore Florence in this and I will
admit that the last third of the book took me completely by surprise. A very, very well-done thriller.
Read more
3 people found this helpful
Go to Amazon.com to see all 35 reviews 3.7 out of 5 stars
Get FREE delivery with Amazon Prime
Prime members enjoy FREE Delivery and exclusive access to movies, TV shows, music, Kindle e-books, Twitch Prime, and more.
> Get Started
Back to top
Get to Know Us
Make Money with Us
Let Us Help You
And don't forget:
© 1996-2020, Amazon.com, Inc. or its affiliates