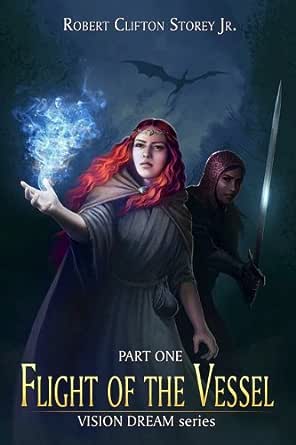 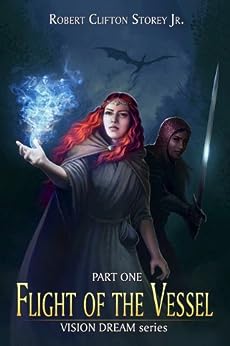 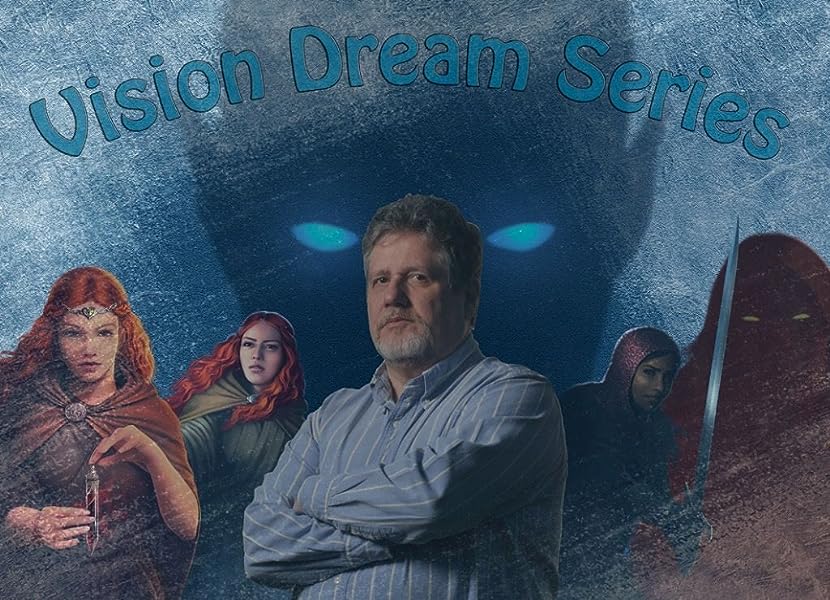 Rosetta Yorke
5.0 out of 5 stars A gripping, all-action fantasy with monsters, magic & great characters! I loved it! FIVE STARS!
Reviewed in the United Kingdom on 23 May 2019
Verified Purchase
What a great story! ‘Flight of the Vessel’ is an enthralling read; I simply couldn’t put it down! There are so many things I love about this book:

The very first sentence plunges you bang into the centre of the drama when Princess Angelterra and her party are galloping along on horseback, fleeing for their lives. As the chapters unfold, there's just enough backstory provided for you to get a sense of the princess’s world and of the evil power of Shutharja, the mighty sorcerer who is destroying it, before the roller-coaster action sweeps you along with it again.

Grief-stricken though she is at the tragic loss of her parents, teenage Angelterra has to assume the mantle of leader of her people, which she does with endearing courage – the scene where she stands on the castle’s curtain wall, buffeted by storm winds and in visible defiance of the enemy mustering on the beach below, is one of my favourites. (Telling you the others would be spoilers, but you’ll know them when you reach them!) As Angelterra grows into her new role, she discovers a flair for resolving potentially disastrous clashes between her allies, and a hitherto secret magical ability that may prove crucial in her quest to reunite her people and free her homeland from the dominion of Evil. At the same time as all this, though, she still thinks and behaves like a credible, mischievous nineteen-year-old: she feels fear, embarrassment, passion, anger, envy and jealousy. I smiled at the way she teases her childhood sweetheart, Dareldin, and cheered at the graphic gesture she gives in reply to the leering enemy commander, Lord Gravloc’s repulsive threat. Her plucky spirit & realistic flaws soon had me caring deeply about what might befall her as the story progressed.

Angelterra’s brave band of friends and allies, each with their own vital skills to bring to her aid, are lively, engaging and resourceful characters, too: her hot-headed swordswoman, Lady Knight Jeela, and her mysterious magical decoy, Concera, whose motives are so ambiguous, are my favourites amongst them.

Robert Clifton Storey Jr. is a born fantasy writer with a great sense of humour. His world, rich in history and folklore, is underpinned by complex religious and magical systems that are brilliantly innovative and utterly convincing. He has exciting battle scenes, awesome confrontations between good and evil magic wielders, menacing portents and some really cool, monstrous creatures – just wait till you meet the dark magic dragon and the hideous ‘rex verka’!

If you fancy a fast paced, nail-biting fantasy with great characters, a fearsome sorcerer adversary and unforeseen twists and turns along the way that will keep you guessing until the very last page, and beyond, then Flight of the Vessel is the book for you! I thoroughly recommend it.
Read more
Report abuse

Mazzer
5.0 out of 5 stars Great and would recommend tis series
Reviewed in the United Kingdom on 18 July 2014
Verified Purchase
Good sereies of fantasy books. Not too heavy a read and a bit different from other fantasy books I have read
Read more
Report abuse

lilcreative
5.0 out of 5 stars A Great Adventure
Reviewed in the United States on 11 April 2015
Verified Purchase
What an enchanting fantasy! Storey weaves a fascinating tale here, featuring important philosophical questions, and delivering them through a fantastic adventure filled with characters you'll fall in love with. Of particular interest to me was how powerfully he painted both Princess Angelterra and her Lady Knight. These are excellent examples of feminine power in full force, yet without losing a certain sense of charm; these are women who embrace power as women, not as women trying to mimic male behavior. They inhabit their strength and power fully, and beautifully. I've already encouraged several of my friends to ensure that they especially get their daughters to read it (though their sons will find it delightful too!), as girls need solid examples of female characters of grace, integrity, and strength these days.

I want to also comment on the use of magic in this book. Rather than delivering a cliched or contrived use of magic that one sees far too often these days, Storey managed to create a story in which magic makes utter sense, it feels as if magic - and even dragons - make total sense there, and as much a natural part of the story as the oxygen his characters breathe. It's a unique use of magic, and not overdone. Impressed with the balance.

I'm definitely looking forward to moving on to books 2 and 3! If you're on the fence about this book, don't be. Buy it, and settle in, because you're going to want to try to read this in one sitting.
Read more
2 people found this helpful
Report abuse

HeartFire
5.0 out of 5 stars Loved this original tale.
Reviewed in the United States on 8 September 2020
Verified Purchase
This was really a great story with well described people and events. Many surprises along the way, many twist and turns. Loved the magic aspect. This book was so good I couldn't wait to pick it back up! I will have to get the next one to see what happens next. One heck of a cliff hanger! Extremely well written and descriptive in every sense. Any fantasy lover out there must get this series take my word for it!
Read more
Report abuse

TAB
4.0 out of 5 stars An epic fantasy with something for everyone.
Reviewed in the United States on 22 August 2014
Verified Purchase
This fantasy has a religious theme, many feasts, and magic of both varieties. (Light and dark magic)

For a free eBook, this one is well written, and with all the hard names, I was impressed that there were no typos. Those who enjoy a good fantasy would surely enjoy this one, especially if they are into magic, strong and brave women, wizards, and a war between good and evil.
Read more
One person found this helpful
Report abuse
See all reviews
Get FREE delivery with Amazon Prime
Prime members enjoy FREE Delivery and exclusive access to movies, TV shows, music, Kindle e-books, Twitch Prime, and more.
> Get Started
Back to top
Get to Know Us
Make Money with Us
Let Us Help You
And don't forget:
© 1996-2020, Amazon.com, Inc. or its affiliates