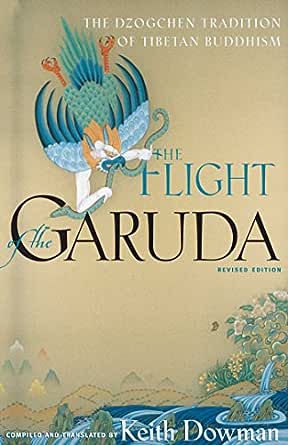 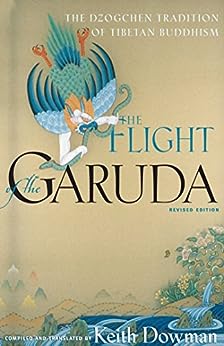 The Flight of the Garuda: The Dzogchen Tradition of Tibetan Buddhism Kindle Edition

Keith Dowman has been involved in the arena of Buddhism for more than forty years, living and raising a family in India and Nepal and in Tibetan refugee society. He received lay ordination in the Nyingma school of Tibetan Buddhism and is the author of more than a dozen books on Tibet and Tibetan Buddhism, including Flight of the Garuda, Sky Dancer, and Original Perfection. --This text refers to an alternate kindle_edition edition.
click to open popover

Sashin Ranasinghe
5.0 out of 5 stars Beautiful
Reviewed in Australia on 8 February 2019
Verified Purchase
An excellent set of pointers to the mind in its natural state, may need to be reread time and again.
Read more
Helpful
Comment Report abuse

Tony Carden
4.0 out of 5 stars Four Stars
Reviewed in Australia on 25 August 2015
Verified Purchase
An excellent read. Cuts nicely through some of the unnecessary accoutrements of mainstream Buddhism.
Read more
Helpful
Comment Report abuse
See all reviews from Australia

Motionless Arrival
5.0 out of 5 stars The Habitation of Light and Sound [and smell and...]
Reviewed in the United Kingdom on 26 December 2010
Verified Purchase
'Do not dress up total presence, which is naked clarity itself, in the clothes of elaborate intellectual analysis. Rather, rest in relaxation in that magnificent sameness that is without partiality. Stay free and easy, without a care in the world, in the place where there is no residue to perception.'

Ah, what a friendly translator Keith Dowman is. And I enjoyed his garrulous, avuncular and well-rounded introductions to the Dzogchen texts selected for this book. The volume contains reiterations of recommendations like the one above; relax, enjoy, be alive in the phenomena of your perceptions and rest in coincidence with them; inhabiting your universal location with an all accepting, non-judgemental largesse. Some people stand in the darkness, afraid to come into the light. Walk forward, take up what you register at the place of its registration. This goes for all your senses; inhabit every inch of yourself [the world in the brilliance of its appearance, devoid of categories, devoid of prejudice] and you will obtain total presence, with no witholdings.
Read more
8 people found this helpful
Helpful
Sending feedback...
Thank you for your feedback.
Sorry, we failed to record your vote. Please try again
Report abuse

Bobcat
5.0 out of 5 stars Essential reading
Reviewed in the United Kingdom on 4 December 2011
Verified Purchase
Essential reading for those familiar with Dzogchen thought. I can add little more to the eloquent minds that have expressed themselves here. But I can endorse their positive comments and add that this is a beautiful, beautiful book.
Read more
3 people found this helpful
Helpful
Sending feedback...
Thank you for your feedback.
Sorry, we failed to record your vote. Please try again
Report abuse

applewood
5.0 out of 5 stars Essential, Accessible DzogChen
Reviewed in the United States on 26 March 2010
Verified Purchase
Dowman gives a wonderfully lucid and readable translation, as well as providing insightful and experiential introductions to the various texts included here. And the main texts here are spontaneous songs of realization by the incomparable 18-19th century itinerant Tibetan yogin Shabkar (founder of the 19th century Rime - "nonsectarian" - movement). By 'songs of realization', I don't mean they tell us how great he was, I mean they are poetically evocative ways for us to gain direct realization. They come across like simple and relaxed, yet deep and immediate conversations with a dear friend.

The other 2/3rds of the book are introductions to and translations of four relatively short seminal dzogchen texts - Emptying the Depths of Hell by 13th century Guru Chowang, The Wish-Granting Prayer of Kuntu Zangpo by 14th century Rigdzin Godemchen, Secret Instruction in a Garland of Vision by the 8th century master Padmasambhava, and The Three Incisive Precepts by the first historical dzogchen master, the 7th century Gerab Dorje, with commentary by the great 19th century Rime lama Patrul Rinpoche.

DzogChen ("Great Perfection") is the highest teaching of the Tibetan traditions (found in Buddhism and native Bon), and as such it was deeply guarded in the past. Thus it may not be for everyone, especially beginner Buddhists, but for those who come to it with a modern sense of intelligent, intuitive openness, free of religious or sectarian dogma it is... beyond description. Basically, dzogchen points out the wonder and completeness in the Here and Now, the inclusiveness of this moment... And these traditional texts clearly express this timeless, awakened moment. This teaching which expresses the peak of a buddha's ("awakened one's") experience is not reserved for Buddhist. It does not discriminate. It is utterly simple and yet self secret. This is not an idea to understand and "get" just once, but a ground or basis to begin from and return to again and again. It is awakened realization from the point of view of the goal, not the path. It is our heritage and destiny, no matter what culture we come from or how we approach life.

Heavy Metal Chef
5.0 out of 5 stars An invaluable book, but please respect it within your own path.
Reviewed in the United States on 22 February 2017
Verified Purchase
Please note that this book is a restricted book on Chagdud Gonpa's Tibetantreasures.com Dharma-supportive supply store. One should ask one's root Guru/Lama before proceeding with this book it should seem. At the least, please approach it with reverence and supplication oneself as one always should. May all sentient beings benefit!
Read more
8 people found this helpful
Helpful
Sending feedback...
Thank you for your feedback.
Sorry, we failed to record your vote. Please try again
Report abuse
Load more international reviews

John
5.0 out of 5 stars Powerful
Reviewed in the United States on 26 July 2018
Verified Purchase
This author is a powerful guide who skillfully contextualizes these invaluable texts that can bring your deepest nature to the forefront of your experience.
Read more
Helpful
Sending feedback...
Thank you for your feedback.
Sorry, we failed to record your vote. Please try again
Report abuse

Skye B.
5.0 out of 5 stars Beautifully translated
Reviewed in the United States on 1 April 2014
Verified Purchase
Traditional Dzogchen non-dual text, beautifully translated by Keith Dowman. I've read it a few times. His translations were recommended to me by my non-dual teacher.
Read more
3 people found this helpful
Helpful
Sending feedback...
Thank you for your feedback.
Sorry, we failed to record your vote. Please try again
Report abuse

Wandering Swan
5.0 out of 5 stars The Flight of the Garuda: The Dzogchen Tradition of Tibetan Buddhism
Reviewed in the United States on 30 December 2012
Verified Purchase
A very thorough and rewarding book written by a Westerner, steeped in the language and customs of Tibet with the guidance of many Rimpoches.
Read more
2 people found this helpful
Helpful
Sending feedback...
Thank you for your feedback.
Sorry, we failed to record your vote. Please try again
Report abuse

Derek
5.0 out of 5 stars Dzogchen is not for the feint hearted
Reviewed in the United States on 17 September 2016
Verified Purchase
If you are studying Dzogchen Buddhism, you will know about this book. You don't need my comments.
Read more
One person found this helpful
Helpful
Sending feedback...
Thank you for your feedback.
Sorry, we failed to record your vote. Please try again
Report abuse
Load more international reviews

Wende
5.0 out of 5 stars excellent
Reviewed in the United States on 28 July 2015
Verified Purchase
excellent book
Read more
One person found this helpful
Helpful
Sending feedback...
Thank you for your feedback.
Sorry, we failed to record your vote. Please try again
Report abuse

Rick
5.0 out of 5 stars Invaluable for non-meditation practice
Reviewed in the United States on 4 February 2016
Verified Purchase
Invaluable heart advice for any mahamudra or dzogchen practitioner embarking on non-meditation practice.
Read more
2 people found this helpful
Helpful
Sending feedback...
Thank you for your feedback.
Sorry, we failed to record your vote. Please try again
Report abuse