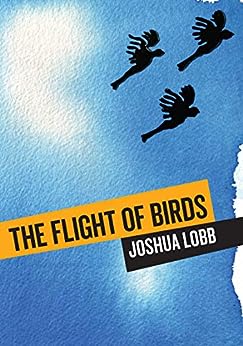 The Flight of Birds: A Novel in Twelve Stories (Animal Publics) Kindle Edition

by Joshua Lobb (Author) Format: Kindle Edition
See all formats and editions
Sorry, there was a problem loading this page. Try again.
Shortlisted for the Readings Prize for New Australian Fiction in 2019!

The Flight of Birds is a novel in twelve stories, each of them compelled by an encounter between the human and animal worlds. The birds in these stories inhabit the same space as humans, but they are also apart, gliding above us. The Flight of Birds: A Novel in Twelve Stories explores what happens when the two worlds meet.

Joshua Lobb’s stories are at once intimate and expansive, grounded in an exquisite sense of place. The birds in these stories are variously free and wild, native and exotic, friendly and hostile. Humans see some of them as pets, some of them as pests, and some of them as food. Through a series of encounters between birds and humans, the book unfolds as a meditation on grief and loss, isolation and depression, and the momentary connections that sustain us through them. Underpinning these interactions is an awareness of climate change, of the violence we do to the living beings around us, and of the possibility of transformation.

The Flight of Birds will change how you think about the planet and humanity’s place in it.
Read more
Previous page
Next page

'Lobb's writing is at many points sparse and straightforward, and at others more pungent and poetic, but underpinning the various virtuoso treatments of the material is an inch-perfect gauge of the weight of how a story unfolds in its telling.' -- Alex Lockwood -- Animal Studies Journal

'The Flight of Birds is full of surprises, as if Lobb is saying to the reader, don't get stuck in the routine of traditional storytelling, come fly with me somewhere dangerous, somewhere fun. I dare you.' -- Catherine McKinnon -- Meanjin

'It's a deeply thoughtful (and yet often light-hearted and amusing) book about the ethical compromises humans make to justify their relationship with animals. Lobb's novel comes from a different place because it is also a meditation on loss and loneliness, but it shares the same preoccupation with the way we share the same spaces as animals but see ourselves as apart.' -- Lisa Hill -- ANZ LitLovers LitBlog

'Humans cannot imagine avian perspectives, Joshua Lobb admits, but his stories explore what we might learn from the attempt. Some of Lobb's strategies are familiar from much recent fiction with ecological themes, such as the use of an educated, intellectually curious narrator-protagonist whose wide reading provides a convenient means of introducing diverse facts and anecdotes about birds into lyrical, richly figurative prose. Others are more adventurous, including shifts in grammatical person and tense. Far from being gratuitous, they foreground substantive questions of intergenerational responsibility.' -- Sascha Morrell -- Australian Book Review

'Lobb's substantial achievement has been to create a cohesive whole in which the parts flow and the patterns resonate. Interlocking and open-ended, the stories are rich with fragments from poems and other texts ... The Flight of Birds creates space for the consciousness of both humans and birds.' -- Rowena Lennox -- Swamphen --This text refers to the paperback edition.

Joshua Lobb teaches creative writing and literary studies at the University of Wollongong. His award-winning stories have appeared in The Bridport Anthology, Best Australian Stories, Animal Studies Journal, Text and Southerly. --This text refers to the paperback edition.