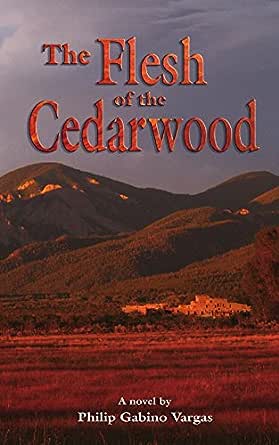 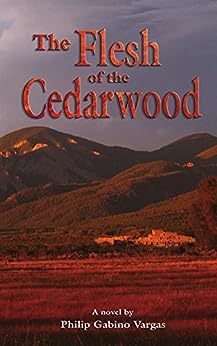 The Flesh of the Cedarwood Kindle Edition

Juan Patricio is orphaned as a boy, but he grows up drawing strength from La Sierra Madre, the Mother Mountain that towers over his village. She is there for him always, whether he is toiling as a migrant worker or fighting in the Korean war. She inspires the artist in him, the carver of cedarwood. Part Hispanic, part native American, Juan is looked down upon by the gringos who treat him as a foreigner in the land of his birth. Yet he lives his life with a quiet dignity and purpose.

The Flesh of the Cedarwood is a touching, poetic novel honoring the achievements of the many Hispanics and native Americans forced to live in poverty, and treated as an inferior and as a foreigner in his own land, themes that have never been more current in our society.

PHILIP GABINO VARGAS is a native son of the mountain villages of northern New Mexico and the farmlands of Colorado. His ancestors are the descendants of the first Americans, the Conquistadores, that came through what today is the State of New Mexico and the southern United States in the early and mid-1500s. In what is now New Mexico, the Conquistadores encountered several small Native American-Pueblos in the borderlands of the Rio Grande and in the 1590s they returned to affirm their culture and strong Catholicism. The author was born and reared in one of those relatively isolated rural byways, Cañon de Fernandez, a village at the mouth of the Taos Canyon. The first four decades of Vargas's life sound like a novel about the American dream. The child of illiterate, Indo-Hispanic migrant laborers, he dropped out of high school and volunteered for the Air Force the day after the Korean hostilities began. He arrived in Korea at the height of the war, December 1950. He saw some combat and became a military boxing champion. Upon his discharge, he talked his way into the University of New Mexico to take advantage of the G.I. Bill and thereafter was awarded an athletic scholarship (wrestling) that helped pay for his tuition and books. From the University of New Mexico, Philip went on to earn a doctorate degree in sociology from the University of Colorado, a law degree from the Harvard Law School, and then on to professorships at major American universities, including the University of Arizona. Vargas received a political appointment to a major commission studying the workings of the information practices and polices of the federal government, a job that made him one of the highest ranking Hispanics in the US government. And that's where the American Dream turned into a nightmare. Vargas' thorough examination led to a report that federal agencies were circumventing the Freedom of Information and Privacy Acts, drawing attention to the pervasive secreting of information. His findings were suppressed and remained secret. Vargas refused to do the whitewash, instead releasing the full and honest report to the White House, to the President and Vice President, the US Congress, and through the press to the American public. He was summarily fired and branded a whistleblower. Vargas was "blackballed," lost his home and his family and, it seems, any chance for further government service.
click to open popover

Flo.
5.0 out of 5 stars I would highly recommnd this book
10 July 2015 - Published on Amazon.com
The author has a good grasp on the subject of his characters. I loved reading it and was disappointed when the story ended.
Read more
Go to Amazon.com to see all 2 reviews 5.0 out of 5 stars
Get FREE delivery with Amazon Prime
Prime members enjoy FREE Delivery and exclusive access to movies, TV shows, music, Kindle e-books, Twitch Prime, and more.
> Get Started
Back to top
Get to Know Us
Make Money with Us
Let Us Help You
And don't forget:
© 1996-2020, Amazon.com, Inc. or its affiliates