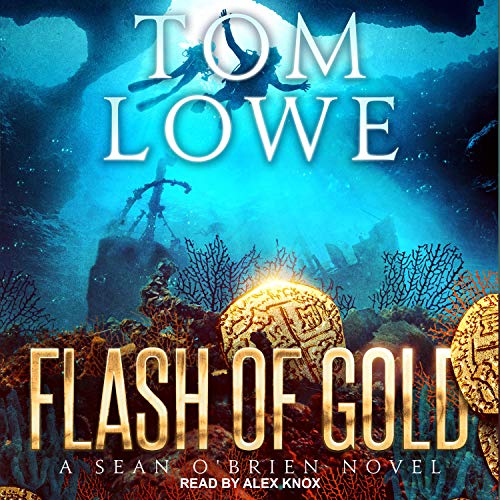 In the world of maritime treasure hunting, former college professor Walt Baker is about to hit the lottery. More than 300 years ago, the legendary Spanish galleon Santa Ramona sank in a hurricane somewhere off the coast of Florida. The ship was carrying gold, silver, jewels, and artifacts worth an estimated $10 billion in today’s dollars.

With $10 billion at stake, the best criminal minds will scheme to take what’s not theirs. When they try to frame Sean O’Brien’s friend Nick Cronus for the murder of one of Walt Baker’s divers, O’Brien begins to put the puzzle pieces together and sees a frightening picture...not only for Nick, but also for Walt, his daughter, and every member of the salvage crew.

When one of the richest treasures in nautical history is found on the ocean floor, the sharks start to circle. And as they come closer, they begin enclosing around one man, because the only thing standing in their way to recover billions is Sean O’Brien.

4.7 out of 5 stars
4.7 out of 5
200 global ratings
How are ratings calculated?
To calculate the overall star rating and percentage breakdown by star, we don’t use a simple average. Instead, our system considers things like how recent a review is and if the reviewer bought the item on Amazon. It also analyses reviews to verify trustworthiness.

Carol Michael
5.0 out of 5 stars Riveting
Reviewed in Australia on 5 February 2021
Verified Purchase
I am not one who is able to put words to paper easily - this book is absolutely riveting- the depth of it, of the characters, their love for each other and for one another is so beautiful - the suspense, I was in tears at the end thinking that Sean was going to be lost at sea - you bring the characters to life - God has given you a beautiful talent of telling stories please don’t ever stop - I look forward to Sean, Wynona , Max and the gangs next adventure ❤️
Read more
Helpful
Report abuse
See all reviews

Amazon Customer
3.0 out of 5 stars melindanolan@gmail.com
Reviewed in the United States on 15 February 2021
Verified Purchase
I was very disappointed about several things in this book. First the bad guys did not have to say all the bad things they were going to do to Max and Sean we know as readers already what bad guys can do. Then I've always been proud of you Mr. Lowe for not putting any sexual scenes in your books so I was quite disturbed when I read the part of the bar owner having the girl do what she did to him. Why?? Do you feel like it will sell more books? You already have a lot of people like me that even prepay to buy your books ahead of time
There are many writers that don't mind writing about sexual stuff but you've never gone there till now. Please don't start now as it adds nothing to the story line. Also your readers need to know you love Max the way we do. The characters were more menacing too. I hope the rest of your books will go back to the way you used to write and leave the bad stuff for our imaginations instead of seeing it in print. I will close with a positive note that the story line was good as always.
Read more
2 people found this helpful
Report abuse

Elle Thornton
5.0 out of 5 stars Flash of Gold: A Sean O'Brien Jewel
Reviewed in the United States on 14 October 2021
Verified Purchase
With Flash of Gold, Tom Lowe brings us a timeless tale of greed and murder spawned by the remains off Florida’s east coast of a Spanish treasure ship and its ancient cargo of Inca and Aztec gold and jewels. Lowe brings to his readers a zest for detail that adds to the story’s depth and excitement: whether it is the agonies of a grisly death, the laws of marine salvage, contemporary specialties like forensic podiatric analysis, or a killer pool game with a biker gang, Flash of Gold offers plenty of action and intelligence. Although the main appeal is in having PI Sean O’Brien bring a savage monster to justice, Lowe deftly balances the evil he portrays with the pleasures of O’Brien’s friendships, home, love of good food and Florida’s scenic beauty.
Read more
Report abuse

Amazon Customer
5.0 out of 5 stars Flash of Gold: a riveting story!
Reviewed in the United States on 2 March 2021
Verified Purchase
This novel is about maritime treasure hunting. Over 300 years ago, a Spanish Galleon filled with historical artifacts, silver, gold and jewels sank off the coast of Florida due to a hurricane. Sean O'Brien's friend, Nick Cronus has been accused of murder. Sean, of course, knows his friend is innocent, and take steps to prove this. This book has a great cast of supportive characters and I felt like I was one of them. Mr. O'Brien's willingness to take on criminals is admirable. I got chills so many times through out this novel! Flash of Gold crackles with excitement. Tom Lowe is a truly gifted writer!
Read more
Report abuse

R. W. K.
5.0 out of 5 stars Great read as always
Reviewed in the United States on 15 February 2021
Verified Purchase
As much as I would love to meet his characters, I would love to meet the author Tom Lowe. His writing is careful, rhythmic, and the timing keeps the action going, even though the main character seems a little more than mortal. I would prefer less of the bar room scenes, but it emphasizes the ruthlessness of criminals of all kinds.
Read more
Report abuse
See all reviews
Back to top
Get to Know Us
Make Money with Us
Let Us Help You
And don't forget:
© 1996-2021, Amazon.com, Inc. or its affiliates