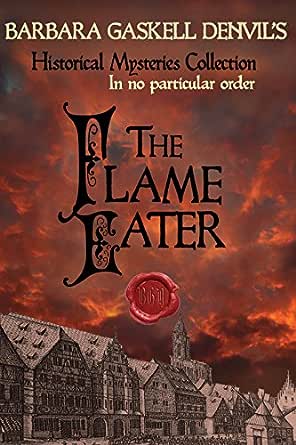 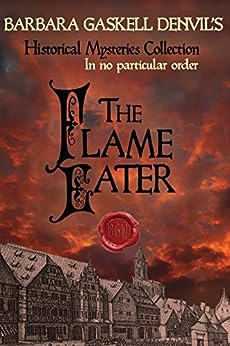 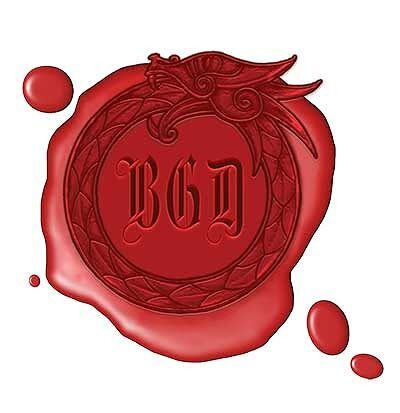 Anna B: "I know no other author who so completely manages to drag me back in time, leaving me submerged in a past skilfully brought to life. Ms Gaskell Denvil's books engage all my senses,"

M.Kallio: "Gaskell-Denvil has woven a tale of mystery, murder, treachery and love. her work forms a tapestry whose fine threads weave the reader into the story. I do not believe in revealing spoilers in a review, but I will tell you that this book is historical fiction at its best. I highly recommend it to readers of history."

Julia Redlich: "Another splendidly absorbing novel from Barbara Gaskell Denvil, packed as always with intriguing romance, murder most frequent and foul and an understanding of medieval life that hints that the knowledge comes from reincarnation or – as I safely suspect – impeccable research."

Money in the Mattress: "You want to savour every meticulously crafted sentence. When it comes to writing mystery, so many authors sacrifice the literary component for the sake of advancing the plot. Fortunately, Barbara Gaskell Denvil is not one of those authors who cut corners. Her opus weighs in at 400+ pages, and there is not a gram of flab."

Angela: "I love that while the story itself was fiction, the author was able to make it historically accurate. This book is full of twists and turns. Espionage and intrigue all mixed in to one of the best romance novels I've read on some time."

Reena: "A wonderful historical read, set in medieval England, that has everything: romance, murder, mystery, intrigue, spies, and an intricate plot that kept me guessing and second guessing my opinions on the culprit until the last word."

An arranged marriage. A divided kingdom. Can an unlikely couple find love on the trail of a murderous conspiracy?

England, 1484. Emeline knows she has no voice in her arranged marriage. So she counts herself fortunate when her betrothed turns out to be a charming man with a heart of gold…

until his violent death casts her into the arms of his monstrous brother. Just when she thinks her wedding day couldn’t get worse, fire and bloodshed ravage the castle. Determined to unmask the murderous culprit, she follows the trail of clues and realises there may be more to her husband than meets the eye.

Nicholas is tired of living in his older brother’s shadow. And being forced to marry a woman who would rather he fill his brother’s coffin isn’t helping matters. As murder and mayhem plagues the kingdom, he must hide the secret mission behind his actions… even from his own wife. But when she embarks on her own investigation, he realizes he may have underestimated the fiery beauty.

When England’s fate hangs in the balance, can Emeline and Nicholas work together to take down the traitorous forces threatening to destroy the kingdom?

The Flame Eater is an enthralling historical mystery set in 15th century England. If you like vibrant medieval settings, multifaceted characters, and fast-paced twists and turns, then you’ll love Barbara Gaskell Denvil’s rich tapestry of devious schemes and mystifying murders.

Buy The Flame Eater Now to read what happens in this enthralling mystery.

Margaret K Lewis
5.0 out of 5 stars The Flame Eater
7 July 2018
Format: Kindle EditionVerified Purchase
I always enjoy Barbara’s historical novels. Her descriptions of events make me imagine I can actually see them, The rainy, gloomy weather, the grime, the rooms, the clothes, the taverns, the fights. Each time I read Barbara’s books I reach for my dictionaries, English Royalty, Biography of historical figures, wars. I learn more every time. Her characters are interesting, and the humour makes me laugh. Thanks Barbara.
Read more
Helpful
Comment Report abuse

Wolfclan
3.0 out of 5 stars Such a shame
13 November 2016
Format: Kindle EditionVerified Purchase
Good story, well written. This book was spoilt for me by the explicit sex scenes which I thought were totally unnecessary. There were also editorial mistakes such as misspellings and words omitted.
Read more
Helpful
Comment Report abuse

Leslie
3.0 out of 5 stars Romance but otherwise lacking
27 October 2019 - Published on Amazon.com
Format: Kindle EditionVerified Purchase
I received a copy of this book for my honest review.

Overall, I did expect a lot more from it than there was. It's not particularly well-formed characters excluding the two main characters, who mostly show character development during the sex that concludes most chapters or is most chapters. The plot is interesting, but with a lack of well-defined characters and patches of good writing, I can't say that I would recommend this book. The sex scenes are the most well detailed and better-written parts of the book, but there's a lack of realistic characters for historical fiction. And overall, it doesn't really get into any details. So if you're looking for a romance novel this is it, but it's not much more than that.

Jean Lombard
4.0 out of 5 stars Four Stars
24 August 2016 - Published on Amazon.com
Format: Kindle EditionVerified Purchase
A very engaging book, the punch line at the end was a surprise!!
Read more
One person found this helpful

Kelly G
1.0 out of 5 stars You've got to be kidding me with this...
27 January 2019 - Published on Amazon.com
Format: Kindle Edition
I read the first book in this series and really enjoyed it so I had high hopes for the second book. Unfortunately, it didn't take long to see that the quality of this book fell way, way short of my expectations.

The characters are a major drawback in this story in that....well, they suck. I know; that's not the most helpful or even most mature way to describe anything you don't like but here, I'm afraid, it is apropos. Every single female character, including the heroine, is insipid to the point of lunacy. They all want to have grand adventures and solve murders but only as long as they can do so in nice clothes, with good food, and basically with as little fuss as possible. The only female character that shows any promise is the heroine's mother and she's no queen. Any other time, I might excuse characters like these as products of the historical era being portrayed in the novel as long as the heroine at least seemed adequate. No; these women are high-strung, high-maintenance, and not too bright. Truthfully, since they're all the product of a 21st century female author, they're downright embarrassing. Couple them with gentlemen who are all lacking in the "gentle" department and you have a whole lot of nothing. The male protagonist, Nicholas, shows promise as he seems like a decent human being and has at least two brain cells to rub together. You almost feel bad that he's loaded down with a dunce of a wife. No chemistry at all causes the romance portion of this book to seem contrived and utterly unbelievable.

The plot isn't much better with Nicholas doing secret work for the King while leaving his wife and her crew of dingbats to chase a murderer despite showing a laughable inability to function outside of respectability. Forget the fact that Nicholas has been accused of said murders and said dingbats can't seem to do anything without him. I guess it just all works out in the end eventually. Other reviews say the ending has a nice twist. I'm reserving judgment.

Bottom line: I'd recommend a hard pass. I love historical fiction and I'm often willing to accept character flaws as part of the experience. In this case, however, there may be too much to overlook. I'm still trying to decide if I have the patience to finish this travesty.

Judith Favia
2.0 out of 5 stars More History and Less Sex Please
31 May 2019 - Published on Amazon.com
Format: Kindle Edition
I love historical mysteries, and love the Medieval period most of all, so I was excited to find a new author. I read the first book and thought there was more explicit sex than I was expecting but the writing was excellent ad the plot was compelling. This one not so much. In fact the historical context was pretty much a backdrop for the very long and very detailed sex scenes. Add to that the violence of the period (yep, I know thing could get ugly) and I lost interest about halfway through. Emeline is a very silly and very naive young woman and Nicholas is alternately the omniscient lover and a self destructive idiot. I dont think I am going to look for the third volume but I have to admit that I am disappointed rather thsn offended.
Read more
One person found this helpful

Heathery Hebert
3.0 out of 5 stars Fortunately, the main male character
21 May 2016 - Published on Amazon.com
Format: Kindle Edition
My first impressions of Emma, the main female character, were that she was very whiny and clingy. If she had been the sole focus, I would have quit the book early on. Fortunately, the main male character, Nicholas, intrigued me from the get-go--partially because he was escaping a window while wearing a dress the first time we see him! While I found myself rolling my eyes at much of Emma's crybaby theatrics, Nicholas kept me interested in the story. I thoroughly enjoyed his sarcastic wit and self-deprecating humor.

I enjoyed the constant whodunit nature of the book. To be honest, I had no idea who our killer was up until it was revealed in the very last chapter. I had my suspicions--and this character was one of my guesses--but I could not have pinpointed it down. Everyone had a reason they could have been the killer, so it was fun to finally see who it was and why.

I found the length of the book to be too much for the story. It could have been edited down by probably 100 pages. Another aspect I felt needed some editing was the excess of dashes in the dialogue. I'd be curious to see a Word count of dashes because it was inexhaustible. Sometimes the dashes were used correctly, but a lot of the time, they weren't. Commas or ellipses would have been more appropriate.

At any rate, I felt this to be an enjoyable read, but it would be strengthened by an editor.


Read more
2 people found this helpful
Go to Amazon.com to see all 59 reviews 4.1 out of 5 stars
Get FREE delivery with Amazon Prime
Prime members enjoy FREE Delivery and exclusive access to movies, TV shows, music, Kindle e-books, Twitch Prime, and more.
> Get Started
Back to top
Get to Know Us
Make Money with Us
Let Us Help You
And don't forget:
© 1996-2020, Amazon.com, Inc. or its affiliates