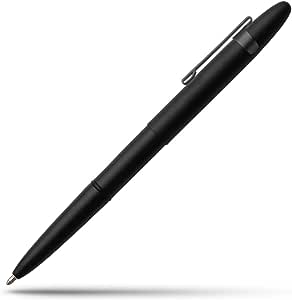 The original Bullet Space Pen was conceived in July of 1948. Paul Fisher was soon machining a new pen design shaped from solid aluminum. It became the first Fisher ball point pen, the #400 Bullet Pen, is arguably the most popular pen of the twentieth century. This pen is now all brass with a Matte black finish.When closed, the Bullet Space Pen is the perfect size to carry in your wallet, pocket, purse, car glove box, organizer or toolbox. When open it's a full sized, evenly balanced writing instrument. The patented ink cartridge was designed by Paul Fisher for NASA in the 1960's enabling it to write in temperatures from -30 to +250 degrees Fahrenheit, under water, in zero gravity, at any angle, even upside down. Includes removable clip.

Made in the USA with US and Globally Sourced Packaging and Materials!

When it comes to pens, if you’re anything like us you can’t settle with just any old plastic ballpoint. You expect and deserve more from your pens - much more. Our 30,000 square foot manufacturing facility is located in Boulder City, Nevada, where our products are both hand and machine tested, so you can write confidently with the knowledge that your Fisher Space Pen will never let you down!

The original Bullet Space Pen was conceived in July of 1948 by Paul Fisher, who was soon machining a new pen design shaped from solid aluminum. This became our first Fisher ball point pen, the #400 Bullet Pen, and arguably the most popular pen of the twentieth century. This pen is now composed of all brass with a chrome finish. Often imitated but never duplicated, the Fisher Bullet Space Pen continues to be our most popular pen.

Facts and History of the Space Pens:

The story of the Space Pen really begins with its inventor, Paul C. Fisher. Before he took to making pens, Paul worked in an airplane propeller factory during World War II. It was there that he gained valuable experience with ball bearings, knowledge that would come in handy down the road for creating ballpoints. He later went on to invent the 'universal refill' ink cartridge, which in turn led him to create the first 'Anti-Gravity' pen, patented in 1966. Although it is a popular misconception that NASA invested millions of dollars developing an anti-gravity writing instrument, the fact of the matter is that Paul had been working on the design for years and had invested roughly $1 million dollars into the pens development . Truth be told, in the beginning Fisher didn’t even set out to create a pen specifically for the astronauts; he was simply looking to make a great pen that worked without leaking. In the end he had developed what he considered to be the perfect pen – a pen with ink that would not be exposed to air, rely on gravity, leak or dry up, and that wrote underwater and in extreme temperatures. His breakthrough happened to be perfectly timed with the space race and he offered the pens to NASA for consideration. Two years of testing later and the Space Pen was approved to accompany the Apollo 7 astronauts into space. Despite the old joke that the Russians solved their anti-gravity writing problem by using pencils, Russian cosmonauts actually began to carry Fisher Space Pens on their missions as well, at about the same time that NASA did.

The secret behind the unique capabilities of our pens lies in the ink cartridge itself. Our refills are hermetically sealed, pressurized with nitrogen gas, and feature a tungsten carbide ballpoint tip - the same extra hard metal that is used to make armor-piercing ammunition. No longer relying on gravity to write, our pens are able to function at any angle, even upside down! In order to prevent leaks from the gas pressure, our ink has to be thick, thixotropic to be exact. Fisher ink is actually more of a gel than a liquid when it is at rest, with a consistency similar to that of toothpaste. It is only when pressure is applied to the ballpoint that the ink will take on the spreadable properties of a liquid, while still retaining the stickiness needed to adhere to nearly any material.