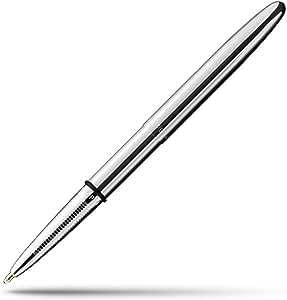 Brand: FISHER
4.7 out of 5 stars 5,698 ratings
Secure transaction
Returns Policy
Amazon-managed Delivery
Your transaction is secure
We work hard to protect your security and privacy. Our payment security system encrypts your information during transmission. We don’t share your credit card details with third-party sellers, and we don’t sell your information to others. Learn more
Amazon-managed Delivery
Amazon manages delivery by using preferred couriers/agents. Order delivery tracking to your doorstep is available

Made in the USA with US and Globally Sourced Packaging and Materials!

When it comes to pens, if you’re anything like us you can’t settle with just any old plastic ballpoint. You expect and deserve more from your pens - much more. Our 30,000 square foot manufacturing facility is located in Boulder City, Nevada, where our products are both hand and machine tested, so you can write confidently with the knowledge that your Fisher Space Pen will never let you down!

The original Bullet Space Pen was conceived in July of 1948 by Paul Fisher, who was soon machining a new pen design shaped from solid aluminum. This became our first Fisher ball point pen, the #400 Bullet Pen, and arguably the most popular pen of the twentieth century. This pen is now composed of all brass with a chrome finish. Often imitated but never duplicated, the Fisher Bullet Space Pen continues to be our most popular pen.

Facts and History of the Space Pens:

The story of the Space Pen really begins with its inventor, Paul C. Fisher. Before he took to making pens, Paul worked in an airplane propeller factory during World War II. It was there that he gained valuable experience with ball bearings, knowledge that would come in handy down the road for creating ballpoints. He later went on to invent the 'universal refill' ink cartridge, which in turn led him to create the first 'Anti-Gravity' pen, patented in 1966. Although it is a popular misconception that NASA invested millions of dollars developing an anti-gravity writing instrument, the fact of the matter is that Paul had been working on the design for years and had invested roughly $1 million dollars into the pens development . Truth be told, in the beginning Fisher didn’t even set out to create a pen specifically for the astronauts; he was simply looking to make a great pen that worked without leaking. In the end he had developed what he considered to be the perfect pen – a pen with ink that would not be exposed to air, rely on gravity, leak or dry up, and that wrote underwater and in extreme temperatures. His breakthrough happened to be perfectly timed with the space race and he offered the pens to NASA for consideration. Two years of testing later and the Space Pen was approved to accompany the Apollo 7 astronauts into space. Despite the old joke that the Russians solved their anti-gravity writing problem by using pencils, Russian cosmonauts actually began to carry Fisher Space Pens on their missions as well, at about the same time that NASA did.

The secret behind the unique capabilities of our pens lies in the ink cartridge itself. Our refills are hermetically sealed, pressurized with nitrogen gas, and feature a tungsten carbide ballpoint tip - the same extra hard metal that is used to make armor-piercing ammunition. No longer relying on gravity to write, our pens are able to function at any angle, even upside down! In order to prevent leaks from the gas pressure, our ink has to be thick, thixotropic to be exact. Fisher ink is actually more of a gel than a liquid when it is at rest, with a consistency similar to that of toothpaste. It is only when pressure is applied to the ballpoint that the ink will take on the spreadable properties of a liquid, while still retaining the stickiness needed to adhere to nearly any material.

4.7 out of 5 stars
4.7 out of 5
5,698 global ratings
How are ratings calculated?
To calculate the overall star rating and percentage breakdown by star, we don’t use a simple average. Instead, our system considers things like how recent a review is and if the reviewer bought the item on Amazon. It also analyses reviews to verify trustworthiness.

Srimukh Gutta
5.0 out of 5 stars Cool little gift
Reviewed in Australia on 6 January 2020
Colour Name: ChromeVerified Purchase
I gifted this to my grandpa and he loves it would have been even better with a clip on it but its still good.
Read more
Helpful
Report abuse

Daniel Cook
5.0 out of 5 stars Love this pen! (Never been to space).
Reviewed in the United Kingdom on 7 May 2016
Colour Name: ChromeVerified Purchase
I'd always promised myself a Fisher Space Pen and seeing how relatively cheap they were on Amazon, I decided to grab one.

Firstly, the history by itself is enough to make these pens a little special. Anything associated with the space program is as cool as space (10 degrees Kelvin). The fact that it will write on most things a standard ball-point pen would struggle with is its USP. I believe it would even be able to scribe a tiny illegible signature on that terrible ink-repelling strip on the back of a credit card. It will write upside-down, underwater and obviously in space. Keeping within the spirit of a truthful review, I haven't tested the latter. -but I live each day with the hope that the phone will ring and someone says "We've got a spare ticket on a rocket, have you got your own pen?"

Next there is the design and it's here I think this particular pen really shines. When closed up the smooth curves describe an aesthetically pleasing shape. Small. About the size of the palm on an average human hand. Alien hands may find this very small or very big. Any aliens reading this review are politely directed towards your own planet's Amazon. The pen fits nicely into any pocket you care to try. It is unobtrusive and light.

The pen, once configured for writing, becomes a comfortable full-size pen. There are grooves along the shaft to aid finger grip and it manages this very well. It writes, as mentioned on most surfaces, including faces. As my colleague at work will attest. I find a surprise shout of "SPACE PEN!" and a little scribble on the forehead is as good a test as any. He may disagree, but he hasn't said anything to management yet, so I think we're OK.

The ink flows very well as the cartridge is pressurised with nitrogen. Gone are the days of furiously scribbling on a sacrificial piece of paper trying to get a pen jump-started. It just works every time.

I would recommend this pen for anyone who is hoping to get into space someday, needs to sign the back of a credit card, has an understanding and forgiving colleague or ever has to write stuff on things.

Vassilis
5.0 out of 5 stars A real Space Pen
Reviewed in the United Kingdom on 18 October 2018
Colour Name: BlackVerified Purchase
An excellent pen. Smooth writing. On some countries the basic writing pen color is blue. This one comes with the US standard in writing, which is black. So I purchased a blue ink. This item also does not have the clip on it. I purchased the clip separate. Without the clip one can easily loose it, drop it, or accidentally forget it somewhere... But in general its regarding a nice purchase. Worth the money.
Read more

5.0 out of 5 stars A real Space Pen
Reviewed in the United Kingdom on 18 October 2018
An excellent pen. Smooth writing. On some countries the basic writing pen color is blue. This one comes with the US standard in writing, which is black. So I purchased a blue ink. This item also does not have the clip on it. I purchased the clip separate. Without the clip one can easily loose it, drop it, or accidentally forget it somewhere... But in general its regarding a nice purchase. Worth the money.
Images in this review

I would love to give it 5 stars but unfortunately the polished finish does show signs of due to the lid rubbing against it leaving a slight ring scuff. That said i highly recommend this pen to anyone.

Amazon Customer
5.0 out of 5 stars Absolutely the best pen that money could buy for most people..
Reviewed in the United Kingdom on 25 July 2019
Colour Name: BlackVerified Purchase
Ever tried to write upside down on electrical tape(admittedly white in colour)... This can do it.. I work as a mechanic and literaly snap most cheap pens in half with the heavy pressure I apply to the barrel...

This pen is short enough not to get the leverage to bend but only needs light pressure.. Wipes clean(warning do not grease the o ring or the lid will!! Fall off) replaceable cartridges and robust threads..

This is now my faithful companion in a case with an olight s2r Barton 2,victronix mini knife sharpener, leatherman bit set, and a leatherman signal(with blade lock removed to be legal carry..)
Read more
One person found this helpful
Report abuse

SlaineX
5.0 out of 5 stars It is a great piece of everyday carry
Reviewed in the United Kingdom on 15 February 2018
Colour Name: BlackVerified Purchase
Along with many of my purchases, this was bought with 'what would Batman use?' in the forefront of my mind. This pen is what Batman would use. It is a great piece of everyday carry, is still running on the same ink over a year later and boasts a wonderful design - tiny with the lid on and yet full sized when the lid is removed and placed on the end for writing. Excellent.
Read more
7 people found this helpful
Report abuse
See all reviews
Pages with related products. See and discover other items: Top rated in Ballpoint & Fountain Pen Sets
Get FREE delivery with Amazon Prime
Prime members enjoy FREE Delivery and exclusive access to movies, TV shows, music, Kindle e-books, Twitch Prime, and more.
> Get Started
Back to top
Get to Know Us
Make Money with Us
Let Us Help You
And don't forget:
© 1996-2020, Amazon.com, Inc. or its affiliates