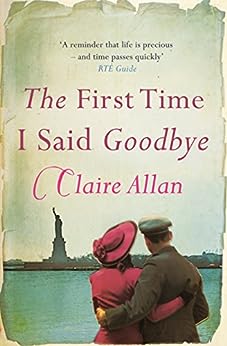 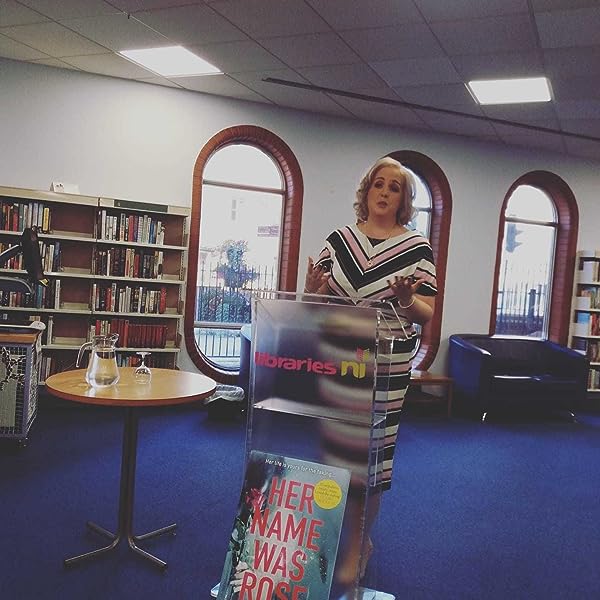 4.4 out of 5 stars
4.4 out of 5
1,523 global ratings
How are ratings calculated?
To calculate the overall star rating and percentage breakdown by star, we don’t use a simple average. Instead, our system considers things like how recent a review is and if the reviewer bought the item on Amazon. It also analyses reviews to verify trustworthiness.

Sandy
TOP 500 REVIEWER
5.0 out of 5 stars An incredibly moving story.
Reviewed in Australia on 25 July 2019
Verified Purchase
Oh dear, I am welling up after finishing this incredible story.
A dual timeline set in Ireland and America during the 1950's and in 2010, it is about the conflict of loss, true love and family loyalty .
An incredibly moving story, well written and unputdownable.
I would have no hesitation in recommending this fabulous read.

Amazon Customer
5.0 out of 5 stars Beautiful and nostalgic.
Reviewed in Australia on 9 December 2019
Verified Purchase
The first time I said goodbye is a wonderful story loosely based on real life circumstances. A story of lost love only to be found again 50 years later. Moving back and forwards from the past to the present it paints a picture of life in Derry Ireland. Mother and daughter return to recapture lost love and find new life. A brilliant read.
Read more
Helpful
Report abuse

Amazon Customer
4.0 out of 5 stars Captivating and emotive.
Reviewed in Australia on 13 August 2017
Verified Purchase
I thought the storyline was rather predictable but that didn't detract from the author's portrayal of the feelings and emotions of the main characters. After losing their beloved husband and father to cancer Stella convinces her daughter Anna to accompany her on a visit to Ireland to visit her family and homeland. During their visit, Anna is stunned to learn the story of her mother's painful past.
Read more
Helpful
Report abuse

Meryl Clarke
5.0 out of 5 stars Keeps you guessing
Reviewed in Australia on 4 June 2020
Verified Purchase
If you ever had a first love that didn’t turn in to your last love and you always wondered ‘what if’, this is a story for you. I loved the seamless moving between yesterday when Stella was a young girl, to today, where she is a mother with an adult daughter who is struggling to accept that her father was not her mother’s only love. Beautifully written.
Read more
Helpful
Report abuse

Kindle Customer
TOP 1000 REVIEWER
5.0 out of 5 stars A lovely sad story
Reviewed in Australia on 19 August 2017
Verified Purchase
This was lovely. I had almost given up on romance novels as I read so many below average ones, but this was absolutely lovely. The characters are likeable and relateable and it is well written. The book flows, no slow bits or confusing parts. A wonderful read that I will be recommending to my friends.
Read more
Helpful
Report abuse

Kindle Customer
5.0 out of 5 stars One for every migrant.
Reviewed in Australia on 18 August 2017
Verified Purchase
Occasionally a book comes along that just grabs my heart.
Mother and daughter travel to Ireland for a family reunion.
For the daughter it is like entering a strange third world country, but her mother is home at last.
Read more
Helpful
Report abuse

Jockaboy
3.0 out of 5 stars A good read.
Reviewed in Australia on 5 May 2018
Verified Purchase
Easy enough to read but not the best I’ve ever read though plenty to keep you turning the pages. Give it a go.
Read more
Helpful
Report abuse

Kees Van Duyn
5.0 out of 5 stars Love always finds a way...
Reviewed in Australia on 25 August 2017
Verified Purchase
A wonderful love story... old-fashioned and innocent just like it really would have been... can't recommend highly enough... And just a little more than Irish... fabulous!
Read more
Helpful
Report abuse
See all reviews

Sarah Hague
5.0 out of 5 stars Beautifully written
Reviewed in the United Kingdom on 7 January 2019
Verified Purchase
This is a book based on elements of a true but tragic love story. Set in the 50s and the present day, it tells the story of two women - mother and daughter. After the death of the husband/father, they go on a trip to Ireland to see family and friends, to find solace, kindness and new beginnings.

In the background lurks a secret love story which gradually comes to light as alternate chapters jump back in time to describe what happened through Stella's eyes.

Sarah Brown
5.0 out of 5 stars Irish charm
Reviewed in the United Kingdom on 1 February 2019
Verified Purchase
This was a charming narrative that pulled me in right from the beginning. It was clear that readers would soon learn about Stella's history and, being back in her hometown of Derry, would give her and her daughter, Annabel, a chance for re-discovering themselves, once and for all.

Initially this book could be considered as having a slow start. However, Allan carefully crafts the two characters of Annabel and Stella, allowing readers to establish a relationship with both before the story really starts to take off when the women arrive in Ireland. I don't think I have read a novel set in Ireland and I really appreciated the charm and friendliness that came from all of the characters! Having been to this amazing country a couple of times, I think Allan encapsulates what the Irish people are all about, and I believe this element adds to the warmth of the story.

Shadowing the entire story is the death of Annabel's father. The inevitable, emotional impact that this has on Annabel and her mother is explored throughout this narrative. Both Annabel and Stella have to come to terms with his slow decline in health, leading to his eventual death, and the way that Allan describes this during the novel certainly touched me and caused me to reminisce on a personal level.

The dual narrative allows readers to explore Annabel's return to strength as she grows to develop a strong friendship with her cousin, Sam. On the other hand, readers learn what happened to her mother, Stella, back in Derry in 1959. The story of Stella's lost love is touching and sad; the lost hopes and dreams constantly conflict with the fact that Stella has just lost her husband. Stella mourns not just for her husband, but also the man she was never able to marry.

This was a lovely story and I really enjoyed reading it. I personally do not think that this novel's cover does not do the plot any justice: it is not about baking cakes and having cups of tea, but about a love that never was. The journey that these  two women take - both physically and emotionally - is endearing and a symbol that despite hardships, you can ride the storm and emerge stronger on the other side.
Read more
3 people found this helpful
Report abuse

Lynda Kelly
4.0 out of 5 stars Quite A Rushed Ending
Reviewed in the United Kingdom on 22 April 2019
Verified Purchase
This was a lovely story, just as I expected, though it seemed to get all very rushed at the end......such a pity. I'd have had a good additional 100 pages making a lot more of it than she did.....this won't stop me from recommending it, however, and I'll definitely read her again.
She created a super family in the Hegartys, they're a great bunch. The humour featured brought to mind the Irish families that Marian Keyes creates so well, too. Some very touching moments were featured, one passage made me sob and a letter actually made me feel quite ill ! I didn't really "get" why Stella never even went back to Derry for a visit, either, in the intervening 50 years !!
There are a few niggles. She writes a lot of back-to-back dialogue but on the same line and you really need to concentrate a lot harder in order to figure out who's speaking when. She also has a needless space after every single hyphen used, like all- American or suspect- looking. There were missed apostrophes and also dropped speechmarks, too, here and there. Throughout she referred to both Marines and marines and couldn't seem to make her mind up whether to capitalise them or not.
Rained was used and not rain, into and not to, born and not borne, eek and not eke (!!), wrote "that was in it" as opposed to "that it was" and "I couldn't speak in this time" and not "at this time" and then we got, "....she had turned in the landing" and not on. So some odd language usage. Under foot doesn't need a space, either.
THIS passage totally confused me, "And with one wage now-the wage that put the roof over their heads in the first place-there was no way the family could manage....." and I finally figured out she missed a word out, probably, gone......with one wage GONE now was what she meant !! This type of mistake cost it the 5* for me, as there were too many not picked up.
Read more
2 people found this helpful
Report abuse

Ms. A. Traczykowski
5.0 out of 5 stars Tearjerker
Reviewed in the United Kingdom on 6 August 2017
Verified Purchase
I have given this book five stars because I felt myself anticipating the ending and blubbering like a baby as the story concluded.
It is a story that has two story's running in tandem. The 1950's sees Stella a naive, young Irish girl who meets and falls in love with an American marine based in Derry.
The year 2010 sees Stella married and living with her husband and grown up daughter in America, but,
not the Marine she fell in love with as a girl.
Circumstances see Stella and her daughter travel back to Ireland for a visit, and a chance to resolve her past.
Excellent story, not mushy romantic, but not able to stop reading it because you need to know what happens next!
Read more
4 people found this helpful
Report abuse

Nessa
5.0 out of 5 stars Truly wonderful and beautiful story - dual timeline storyline involved
Reviewed in the United Kingdom on 1 December 2020
Verified Purchase
This was a truly wonderful and beautiful story, with equal measures of drama, emotional scenes and some laughter moments too. The story was very well written and has a dual timeline storyline involved, which I throughly enjoyed. It didn’t take me long to become engaged/lost in the stories of those of Stella in 1959 and Annabelle in 2010, getting to know them, seeing what they each had to go through and then loving how the two stories came together at the very end, just beautiful and very thought provoking. It truly shows how one or two events that happen in a life can change the overall outcome/direction as to where that said life was originally heading.

I’m so glad that I discovered this author and will very much be looking forward to reading her other books in the coming months.
Read more
Report abuse
See all reviews
Back to top
Get to Know Us
Make Money with Us
Let Us Help You
And don't forget:
© 1996-2021, Amazon.com, Inc. or its affiliates