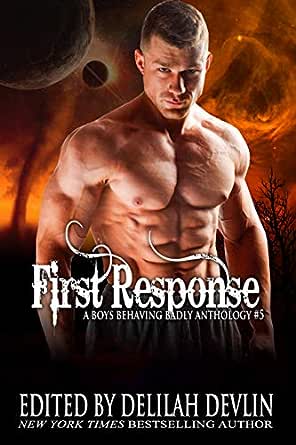 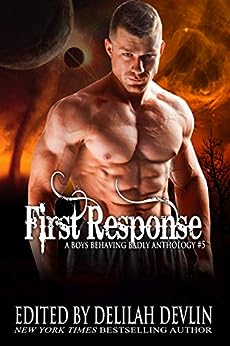 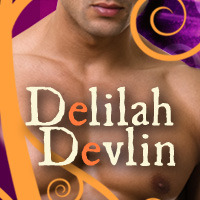 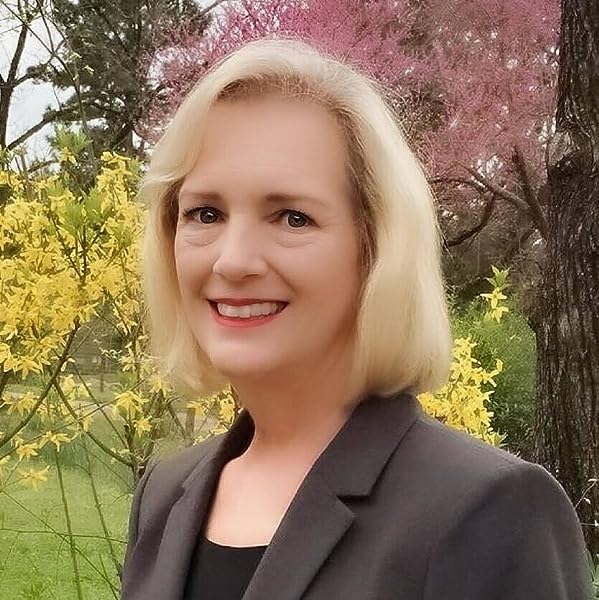 Leigh S.
TOP 1000 REVIEWER
4.0 out of 5 stars Heat and Action Filled Anthology
Reviewed in Australia on 7 July 2020
This anthology is packed with action and with plenty of steam too! I enjoyed most of the stories, some were not my usual genre though, and there were a few editing mistakes throughout.
My favourites were:
Sheltering Charlotte by Elle James
Claiming Lyla by Megan Ryder
Blackout by January George
Handcuffs and G-Strings by Margay Leah Justice
Crossing the Line by A.C. Dawn
Most of these are new to me authors and I will definitely look into finding and reading more by those that really caught my attention.
I received an ARC of this book but the review is entirely of my own opinion and unbiased
Read more
Helpful
Comment Report abuse
See all reviews

F. Chen
5.0 out of 5 stars A collection of page-turners!
Reviewed in the United States on 7 July 2020
Verified Purchase
Four and a half stars

First Response is the fifth Boys Behaving Badly anthology curated by Delilah Devlin. It's one excellent collection of hot reads!

FAR FROM OVER by Reina Torres ////
Russell Webb is rescued by the beautiful and formidable Gina Ferrer. A fellow firefighter, he's wanted her since they were in training. But it isn't until his life flashed before his eyes that he determines to do something about it. Ms Torres's story is exciting and gripping.

SHELTERING CHARLOTTE by Elle James ////
Logan Mitchell's loved Charlotte forever, but she'd gone off and married someone else. Now she's divorced and back in Hellfire, and determined to guard herself from future pain and harm. Good thing Logan is a patient and considerate man. And when a storm sweeps into town, it ignites a storm of a different kind for this couple. Part of Ms James's Hellfire series, this story stands well alone.

THE SIREN'S SONG by Ava Cuvay ////
Lorlii Atarga owns The Siren's Song, a bar that caters to a wide audience, including her BFF Roark Trekker, aka "Raging Roark", Captain of Sigma-9 Spaceport's Fire Force. She's also madly in love with him, not that she'd ever admit that. When he confronts her shifty bar manager attacking her, that changes the course of their future interactions for good. Ms Cuvay's story is a terrific scifi take on the theme.

FIRE IN THE STORM by Payton Harlie ///
Kevin Trask, a fire rescue worker, and Kandi Reynolds, a retired Marine and now owner of a vacation rental, are stranded together during a hurricane. For two people who'd determinedly not been looking for anything longer term, this might be the start to something a little more permanent. Ms Harlie's story is quick and satisfying.

CLAIMING LYLA by Megan Ryder ////
Lyla Chatham's literally fleeing multiple pursuers who are intent on claiming her as their mate, pursuers her worthless brother has allowed this privilege. Duncan Taggart is on a Council mission to investigate some reports of wrongdoing by local packs. What he hadn't expected to find was his mate. Ms Ryder's story is a page turner.

OVER THE EDGE by N.J. Walters ////
Mariah Mills and Jack Morgan have been separated for a year. When she ends up on a work retreat at the lodge Jack's working at, Jack doesn't intend to waste this chance to try to repair what he'd let go wrong. A lovely second-chance story by Ms Walters.

SAVING TIME by Kimberly Dean ///
Everly is a scientist working on a portable time-travel unit. Devlin is a time marshal, tasked with rescuing and tracking down those who get lost in time. When an unexpected accident happens, it might give Everly and Devlin the perfect opportunity at the perfect time. Enjoyed this creative take on the theme by Ms Dean.

FALLING OFF THE SINGLE TRUCK by Tray Ellis ///
Emma is a hardcore biker who often ends up riding by herself because her friends tend to prefer other activities in their spare time. When a bad fall puts her in fellow biker Danny's sights, she realizes that might have been the best ride ever. A fast, fun read.

THE $5.00 KISS OF LIFE by Michal Scott ///
Beverly Reynolds is the minister's daughter and committed to walking the walk and not dishonoring her faith or her parents. Rob Williams is a local firefighter who tempts her beyond rational thought. Not simply his appearance or his beautiful smile, but his easy confidence and the way he draws friends from far and wide. When he appears in the town kissing booth as a fundraiser, it's the perfect opportunity to treat herself to a kiss. Michal Scott's characters are well written and captivating.

DRIVE by M. Jayne ///
Olivia Stern is on the run. Having witnessed and reported a pack crime put her on that pack's radar, and she determines not to drag anyone else into that danger zone. Detective Graham Vincent scents his mate when he's next door, and there is no way he's letting anyone get to her, period. A mate is forever. Intersects with M. Jayne's Novus Pack series, but stands well alone.

BLACKOUT by January George ///
Ruby Ramirez has been avoiding Liam Rygaard for several weeks now. They'd shared a mutual flirtation that led to a date, but some damning suggestions lead Ruby to back off when they might have taken things further. When Liam and Ruby are trapped in their apartment's tiny elevator when the power goes out, the truth comes out... An enjoyable second-chance story.

HANDCUFFS and G-STRINGS by Margay Leah Justice ///
Pierce Rogan and Everly Browning meet at a strip club on the night the police officers are holding a fundraiser. No thanks to Pierce's many brothers in blue (and by blood), Pierce is showing off his (lack of) skills on stage. Their chemistry is scorching hot. And all's well that ends well? A cute read, and I would love seeing Ms Justice tell Pierce's brothers' stories as well!

CROSSING THE LINE by A.C. Dawn ///
Jeff and Kat have been dancing around a scorching shared attraction for years. But he's the captain at the fire station they both work at, and they've been careful not to cross any lines. Until a high-stakes, high-adrenaline situation pushes them both over with a vengeance. Ms Dawn's story is both hot and sweet.

IN THE WILD by Delilah Devlin ////
Martika Mills is on the trail of a particularly troublesome bounty, when an unexpected bison encounter strands her in the middle of nowhere with Caleb McKay, forest ranger. They find some creative ways to stay warm and safe through the night. Connected to Ms Devlin's Montana Bounty Hunters series, but stands well alone.

All in all, a great collection to get your heart racing in the best ways!
Read more
One person found this helpful
Report abuse

PJ
5.0 out of 5 stars NOT A “DUD” IN THE ENTIRE ANTHOLOGY!
Reviewed in the United States on 5 July 2020
Verified Purchase
Each story was unique, loads of fun, plus, hot and sexy. Many, many new to me authors that definitely caught my attention. One of the best anthologies I’ve ever read. Definitely recommend!
Read more
One person found this helpful
Report abuse

Jennifer
5.0 out of 5 stars Hot
Reviewed in the United States on 9 July 2020
Verified Purchase
If you are looking for quick hot reads look no further. Need to be rescued, here are some hot guys who would love to help you out.
Read more
One person found this helpful
Report abuse

Marlene
4.0 out of 5 stars Several stories...
Reviewed in the United States on 9 July 2020
Verified Purchase
This wasn't exactly what I expected but found the stories interesting, funny and sensual. Each First Responder had his or her moments in life that remained with them forever. I've enjoyed some of these authors books before and then met new ones.
Read more
Report abuse
See all reviews
Get FREE delivery with Amazon Prime
Prime members enjoy FREE Delivery and exclusive access to movies, TV shows, music, Kindle e-books, Twitch Prime, and more.
> Get Started
Back to top
Get to Know Us
Make Money with Us
Let Us Help You
And don't forget:
© 1996-2020, Amazon.com, Inc. or its affiliates