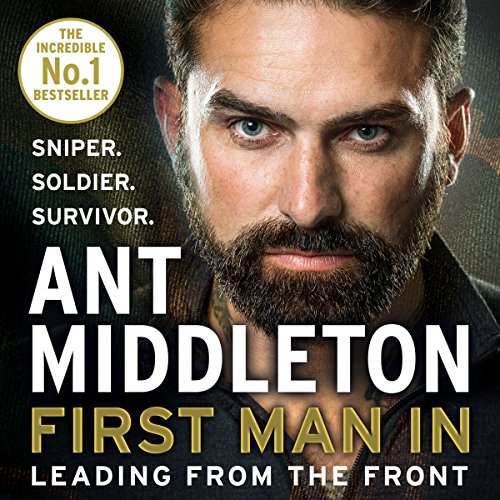 First Man In: Leading from the Front

4.6 out of 5 stars
4.6 out of 5
9,692 global ratings
How are ratings calculated?
To calculate the overall star rating and percentage breakdown by star, we don’t use a simple average. Instead, our system considers things like how recent a review is and if the reviewer bought the item on Amazon. It also analyses reviews to verify trustworthiness.

Michael Longmire
5.0 out of 5 stars Everyone should do National Service
Reviewed in Australia on 11 November 2020
Verified Purchase
There are lots of good lessons in this book.
Lots of insider information about teamwork, preserving in the face of adversity and also self reliance, confidence building and respect for self and respect for others
Read more
2 people found this helpful
Helpful
Report abuse

Amanda McDonald
5.0 out of 5 stars What a read!
Reviewed in Australia on 4 June 2020
Verified Purchase
Ant Middleton really has lived so many lives; some amazing stories from his life, mixed with humble, honest advice that comes from his own real experiences.
Read more
2 people found this helpful
Helpful
Report abuse

Mickie Magan
5.0 out of 5 stars Excellent reading.
Reviewed in Australia on 17 October 2021
Verified Purchase
Positive, honest and inspiring. Everyone regardless of age, sex or profession can take away something that can be used in their own life from this book.
Read more
Helpful
Report abuse

Paul
5.0 out of 5 stars Good read
Reviewed in Australia on 15 October 2021
Verified Purchase
Really good read with some interesting stories. I took a lot away from this book that will help me in my life.
Read more
Helpful
Report abuse

Miss Helen
5.0 out of 5 stars Good book
Reviewed in Australia on 28 August 2021
Verified Purchase
Good book but be prepared some serious stuff in this book
Read more
Helpful
Report abuse

Amazon Customer
4.0 out of 5 stars An incisive and informative look at the armed forces
Reviewed in Australia on 20 August 2020
Should be read by anyone aspiring to leadership
Read more
One person found this helpful
Helpful
Report abuse
See all reviews

The Mole
1.0 out of 5 stars I spent some time in the Army in the areas that Ant...
Reviewed in the United Kingdom on 2 January 2019
Verified Purchase
...also passed through. There are certain parts of this book that do not ring true with me particularly the description of violence being employed by Directing Staff in the RE and 9 Para training. This simply did not happen in the late nineties, this type of behavior was eradicated at least 20 years earlier. I'm not saying that the DS were angels by any means but physical bullies they were not. Ant also makes much of the "alpha male hierarchy" within the RE and 9 Para - in my experience this is/was just not true. Admittedly you get the occasional obnoxious braggard as in any walk of life but the overwhelming sense is of comradeship and support for each other, i.e. looking out for your mates.

Getting back to Ant himself, I cannot believe that the DS in the RE, 9 Para, the Royal Marines and the Special Forces did not recognize that Ant is a dangerous and unstable character compounded by an ego the size of a planet. By his own admission he has a hair trigger and seems to resort to extreme violence if provoked, in my experience SF operators are almost the exact opposite of this, i.e. it is almost impossible to get them to react when provoked - they only use extreme violence when there is absolutely no other way and/or if is part of a considered plan. If I had responsibility for Ant in the armed forces I would have been constantly on the lookout and worried how he would react to stressful situations, to the extent that I would probably have offloaded him. Overall Ant comes across as probably a good foot soldier that needs constant supervision and direction to keep him on track - certainly not a leader.
As for the book itself - I didn't realize it was a self-help leadership manual but since it was written by a man that needs a lot of help I'm not sure of its value. It is poorly written (by a ghost writer?) very boring in sections and contains a lot of navel-gazing. There are also huge gaps in the book and Ant implies that there things he cannot talk about, implying they are covered by the official secrets act - I suspect that he has skipped these areas for other reasons he does not wish to tell us about - this includes his relationship problems? By the end of the book it convinced me that if I saw Ant coming down the street towards me I would cross over to the other side.
Read more
688 people found this helpful
Report abuse

PoorOldSpike
1.0 out of 5 stars Bit of a ripoff
Reviewed in the United Kingdom on 12 November 2018
Verified Purchase
Very disappointing, Ant served 13 years in the military but he hardly mentions details of his two Afghan tours at all, I was hoping he'd take us out on patrol with him and his sniper rifle etc but instead the book is mostly just a long account of his struggles with his personal demons during his barracks training and selection.
Read more
156 people found this helpful
Report abuse

David Parkinson
3.0 out of 5 stars Hmmm, interesting but leaves out too much
Reviewed in the United Kingdom on 23 October 2018
Verified Purchase
I'm a bit of a glutton for SAS books. From McNabb to Ryan I have read them all. As ex forces the stories intrigue me and I love the background.

This one seemed like it would be good - Ant looks interesting on the TV and as if he had a story to tell.

First off - this is a large book due to it;'s very large typeset. Had it been a normal sized font you could expect the book to be half the size. That age old publishers trick. Fine - content that matters.

Game of two halves really. The first part - his background, how he got to the Para's and how he ended up in the Marines. Interesting and would have loved to hear more about just these. About halfway through though it really loses its way and just becomes a long long story about the TV show on a boat, that I never watched or cared about.

Due to new rules one presumes there is literally nothing in here about the SBS times, how he ended up there, the experience or why and how he left. Zero. Nothing. Literally jumps from Marines (but barely anything about that) to bad boy civvy to boat story.

There is also nothing about why or how he ended up on TV, what the story was there or how the SAS programmes came about.

So - great first half (about 2 hours read) and then not much else. There also seems to have been a publisher decision to make this an "Ant's life lessons in..." type ending to each chapter. I just found this tedious and narcissistic. Would have preferred the stories.

Interesting but might be a better paperback read for some.
Read more
121 people found this helpful
Report abuse

M S.
1.0 out of 5 stars Rubbish
Reviewed in the United Kingdom on 25 January 2019
Verified Purchase
I gave this book the benefit of doubt and read it all the way through. Somehow this guy has carved a niche in TV (which I only watched once, and it was also rubbish) which is fair enough, TV is full of fakers so we expect it. Basically this is the biased story of his life, bigging up some parts and glossing over the bad bits. It also tries to be a 'life coaching' tutorial which is just painful and unnecessary. As for being a team player and leader, forget it - nothing is ever his fault, he pushes people just to enjoy them squirm, and if they mess up it's because they are weak, and not because he's a manipulator. As for the story of the ocean voyage, that's the icing on the cake, I wouldn't trust this bloke on a pedalo. Good luck if you model your life on the advice in this book.
Read more
81 people found this helpful
Report abuse

Julie
5.0 out of 5 stars You will be very glad you bought this.
Reviewed in the United Kingdom on 16 September 2018
Verified Purchase
This book is just brilliant. I first saw Ant on the SAS programme and after that knew he'd do well in everything he does, so I was very excited when this book came out. It's gripping and most certainly a page turner. It has nothing but positivity and lifted me in many ways. He teaches without arrogance and he inspires just by saying how it was/is for him. Ant is a natural leader and one I draw inspiration from. This book is not an SAS book nor a life story in the traditional sense, it's a new concept, unexpected, it's a book to gain strength from to help you be the best that you can. Just perfect. Thoroughly recommended.
Read more
73 people found this helpful
Report abuse
See all reviews
Back to top
Get to Know Us
Make Money with Us
Let Us Help You
And don't forget:
© 1996-2021, Amazon.com, Inc. or its affiliates