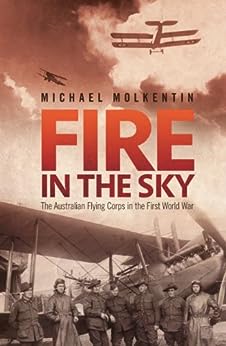 Fire in the Sky: The Australian Flying Corps in the First World War Kindle Edition

by Michael Molkentin (Author) Format: Kindle Edition
See all formats and editions
Sorry, there was a problem loading this page. Try again.
The first book in 90 years dedicated to the daring and courage of the airmen and mechanics of the Australian Flying Corps - a tale of a war fought thousands of feet above the trenches from which only one in two emerged unscathed.

'I half rolled, and there before my eyes was as perfect a target as I had ever seen in my life. A pressure of a thumb, a short burst, a puff of smoke, a flash of flame, a hole on the clouds-and it was over.'

When the First World War began in August 1914, aeroplanes were a novelty, barely a decade old. Despite this, Australia was one of just a few nations outside Europe to establish a military flying school and corps. From a first class of four student pilots the Australian Flying Corps would grow to number almost 4000 by the armistice. Its young volunteers were pioneers in a completely new dimension of warfare as they struggled for control of the skies over the Western Front and Middle East.

Using private letters, diaries and official records, historian Michael Molkentin reveals, for the first time in over 90 years, the remarkable story of the airmen and mechanics of the Australian Flying Corps. It is a tale of heroism and endurance; of a war fought thousands of feet above the trenches in aircraft of timber and fabric. Fire in the Sky takes readers up into this chaotic tumult and into the midst of a war from which only one in two Australian airmen emerged unscathed.
Read more
Previous page
Next page

Michael Molkentin is a prize-winning historian, teacher and battlefield tour guide. He has a degree in History from the University of Wollongong. --This text refers to the paperback edition.

The first book in 90 years dedicated to the daring and courage of the airmen and mechanics of the Australian Flying Corps - a tale of a war fought thousands of feet above the trenches from which only one in two emerged unscathed. --This text refers to an alternate kindle_edition edition.

"Although academically sound this book is an exciting read . . . the author brings the war to life by skilfully weaving in a large number of quotes from the men who fought with the Australian Flying Corps (AFC). . . . an excellent book, well written, decent maps and excellent illustrations. I cannot recommend it too highly." --Peter Hart, author, "The Somme: Darkest Hour on the Western Front" --This text refers to an alternate kindle_edition edition.
Read more

Michael Molkentin is a historian researching the wartime histories of Australia and the other British dominions. He is particularly interested in aviation and air power. He holds a PhD in History from the University of New South Wales.

Allen & Unwin published Michael’s first book, 'Fire in the Sky: the Australian Flying Corps in the First World War' in 2010; it was highly commended for the Fellowship of Australian Writers Sid Harta Literature Award for Non-fiction and is currently in its second edition. His second book, 'Flying the Southern Cross: Aviators Charles Ulm and Charles Kingsford Smith' was published by the National Library of Australia in 2012.

Michael’s latest book is 'Australia and the War in the Air'. Based on his doctoral thesis, it is Volume 1 of Oxford University Press’ Centenary History of Australia and the Great War series.

Neil Sidwell
5.0 out of 5 stars Excellent read for WW1 aviation enthusiasts
Reviewed in Australia on 31 July 2019
Verified Purchase
This book takes a detailed look at the role of Australian airmen in the various battlefronts of WW1, and includes extracts from pilots’ own reports. Interesting and informative, and obviously very well researched.
Read more
Helpful
Report abuse

P. Ibbotson
5.0 out of 5 stars Excellent History of the Australian Flying Corps
Reviewed in the United States on 1 August 2011
Verified Purchase
Australia was the only Commonwealth nation (aside from Great Britain) to field an air arm in the Great War. Four front line and four training squadrons went overseas from 1914. This book provides a fantastic record of their activities. But it isn't a dry old history lecture - it is full of tales from the men who flew fragile biplanes over inhospitable desert, the muddy trenches, and fought the enemy in true ANZAC spirit. A lot of names which became Australian household names in the 20's and 30's began their story here - Hudson Fysh, Kingsford Smith, and Harry Cobby to name a few. The unsung are not forgotten either - the families at home, the ground crews, the locals - all are included. An excellent read - I commend it to anyone with an interest in Australian war history, and anyone with an interest in the early days of flying. I only gave it 5 stars because Amazon doesn't have 10!
Read more
3 people found this helpful
Report abuse

Rai Skrupskis
5.0 out of 5 stars Engaging history
Reviewed in the United States on 27 April 2013
Verified Purchase
This is a wonderfully balanced overview of the Australian Flying Corps in World War One. The author uses memoirs from survivors and official accounts to paint a comprehensive picture of the personal costs of fighting the first war in the air. He pulls no punches. The strain is made clear and the psychological cost becomes obvious. The author also provides context with accounts from non-Aussie witnesses to highlight the universal experience of aviators from all sides. An excellent update to the official history.
Read more
One person found this helpful
Report abuse

BRETT O'MALEY
5.0 out of 5 stars An attractively written history of the Australin Air Force
Reviewed in the United States on 21 May 2012
Verified Purchase
How it all began at Point Cook, pretend aeroplanes, then of we go to war.

The Sinai desert in support of the light horse, wobbling into the air the fledgling airforce takes shape in one of the most important theatres of the war.

You meet all the famous pioneers of Australia's comercial airlines cutting their teeth in the sandstorms of Arabia.

Michael Molkentin has crafted a wonderful story of the birth of the RAAF and the wonderful charachters involved, its all been done before but this is the best one yet.

WW1 aviation scholar
5.0 out of 5 stars excellent in depth history
Reviewed in the United States on 31 August 2011
Verified Purchase
This book is very informative and entertaining. The writer has a gift for giving both the overall stategic and tactical importance of missions and campaigns, and the intimate and revealing lives of individual pilots.
Read more
3 people found this helpful
Report abuse
See all reviews
Report an issue
Does this item contain inappropriate content?
Report
Do you believe that this item violates a copyright?
Report
Does this item contain quality or formatting issues?
Report