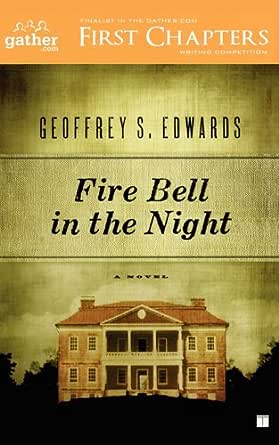 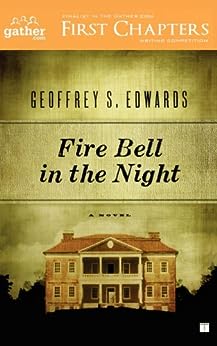 Fire Bell in the Night: A Novel Kindle Edition

Geoffrey S. Edwards lives with his wife, Anne, in Chicago. --This text refers to an alternate kindle_edition edition.

Katy R
5.0 out of 5 stars Highly Relevant Historical Fiction
Reviewed in the United States on 3 January 2021
Verified Purchase
With a title taken from a quote by Thomas Jefferson, Fire Bell in the Night is an atmospheric suspense story set in Charleston,South Carolina, ten years before Confederate guns fired on Ft. Sumter to start the Civil War. As we look back at past events through the lens of our own experiences and our current awareness of institutional racism, we cannot help but wonder, "What were they thinking?" How could honorable people justify a slave-based society? The author provides insight through a well rearched setting and chain of events with believable characters - one unlike any I have encountered in literature. The story is a snapshot in time, where characters speak from their own perspectives and prejudices. The story also has an interesting twist of an ending. I highly recommend this novel.
Read more
One person found this helpful
Report abuse

Jim Duggins, Ph.D.
5.0 out of 5 stars Focus on the Character of the South
Reviewed in the United States on 1 January 2009
Verified Purchase
It is the protagonist, John Sharp, in Geoffrey Edwards novel who comands center stage in this novel, The Bell in the Night. A story set in Charleston, SC, in the decade before the civil war, it deals with the devilish question of a farmer being tried for harboring a fugitive slave. Sharp has come from New York to report the story for his newspaper back home. As foils for the protagonist, Edwards presents a sterotypical handsome and intelligent planter, and his beautiful sister, a rambunctious young partying, bon vivant reporter, and opens the story with the death of yet another reporter whose death under the wheels of a carriage seems to be suspicious.

Although these many characters are well portrayed, the reader is still held like moth to candle by the relatively casual way Sharp goes about his duty in squeezing information from an often hostile environment. The reader watches transfixed with fear as Sharp seems unaware of those in Charleston, the rich and powerful, as well as ignorant bigots who would destroy him. As an added fillip to the main plot surprising back stories of the planter, his romantically inclined sister, and an alien group that plot to hasten the coming civil war add to the satisfyng conclusion of this first rete novel.

Kindle Customer
4.0 out of 5 stars Interesting story and characters
Reviewed in the United States on 3 November 2016
Verified Purchase
Interesting story, set in an interesting place and time, and including historic events that were not familiar to me. The characters are well drawn and the story is involving. The only criticism I have is the frequent use of words and phrases which are a bit jarringly contemporary and disrupt the atmosphere of the place and time that is generally well invoked.
Read more
One person found this helpful
Report abuse

Ken Coffman
5.0 out of 5 stars A fine example of historical fiction
Reviewed in the United States on 6 February 2008
Verified Purchase
I bought this book out of curiosity. It was a reader's chioce in the Gather First Chapters competition. Could it possibly stand on its own merit as an entertaining and thought-provoking read? Could winning a popularity contest possibly correlate with quality, professional work?

About 10 pages in, it's clear that Geoffrey is a real writer, with real ideas and real literary talent. The man writes masterfully. There's nothing fancy about it, he lets the story unfold at its own pace with solid writing chops.
Beyond a compelling and easy-to-read story, I appreciate how he shows both sides of the issues behind the civil war that cost so many lives. If you like historical fiction, then this book belongs on your bookshelf. I consider myself a bit of a talent scout and I predict that Geoffrey has a long and successful career ahead of him. Well done, sir!
Ken Coffman is the author of Steel Waters, Glen Wilson's Bad Medicine and five other novels.
Read more
6 people found this helpful
Report abuse

R Owens
5.0 out of 5 stars A Future Classic
Reviewed in the United States on 26 January 2010
Verified Purchase
Fire Bell in the Night taught me much about times, personalities and motives preceeding the Civil War. The story was riveting. Nothing was black and white and I enjoyed trying to figure out who were the bad guys and who was trustworthy in this time of turmoil. The only down-point for FBITN was the slight fustration at the many typographical errors. I enjoyed the fact that this book was published as a contest winner of gather.com. I hope I get to read all their winning books.
Read more
2 people found this helpful
Report abuse
See all reviews
Back to top
Get to Know Us
Make Money with Us
Let Us Help You
And don't forget:
© 1996-2021, Amazon.com, Inc. or its affiliates