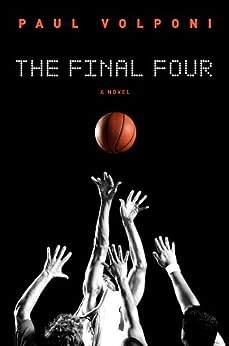 by Paul Volponi (Author) Format: Kindle Edition
See all formats and editions
Sorry, there was a problem loading this page. Try again.
"Volponi, a multiple award-winning author, keeps the tension high from the first to last page ...The Final Four is definitely a winner." —VOYA, starred review

March Madness is in full swing, and there are only four teams let in the NCAA basketball championship. The heavily favored Michigan Spartans and the underdog Troy Trojans meet in the first game in the seminfinals, and it's there that the fates of Malcolm, Roko, Crispin, and M.J. intertwine. As the last moments tick down on the game clock, you'll learn how each player went from being a kid who loves to shoot hoops to a powerful force in one of the most important games of the year. Which team will leave the Superdome victorious? In the end it will come down to who has the most skill, the most drive, and the most heart.

"Volponi nails it when it counts in this dynamic story." —Booklist, starred review

The championship is so close they can taste it. And for four key players, it's about more than just winning. They're fighting for pride, love, recognition, and stardom. But who will come out on top? Three games will settle the score . . .
--This text refers to the paperback edition.

Praise for The Final Four by Paul Volponi: "Volponi, a multiple award-winning author, keeps the tension high from the first to last page ... The Final Four is definitely a winner." --VOYA, starred review "A triple-overtime game keeps readers on the edge of their seats, but nerve-wracking as the action on the floor may be, the baggage that the players bring to the game is equally fraught." --BCCB, starred review "With exciting game action ... this gritty, realistic, and riveting novel deserves the wide audience it will no doubt attract." --School Library Journal, starred review "Volponi nails it when it counts in this dynamic story." --Booklist, starred review "Volponi's latest combines in-the-moment action, basketball history and the points of view of four college ballplayers with very different lives ... No story or character is simple." --Kirkus Reviews --This text refers to the hardcover edition.

Paul Volponi is the author of the critically acclaimed young adult novel Black & White. From 1992 to 1998, he taught adolescents on Rikers Island in New York City to read and write. Mr. Volponi worked at a day treatment center like Daytop teaching students and helping them prepare for the GED. Mr. Volponi lives in New York City. --This text refers to the hardcover edition.
Read more

4.6 out of 5 stars
4.6 out of 5
317 global ratings
How are ratings calculated?
To calculate the overall star rating and percentage breakdown by star, we don’t use a simple average. Instead, our system considers things like how recent a review is and if the reviewer bought the item on Amazon. It also analyses reviews to verify trustworthiness.

Sharlondon
3.0 out of 5 stars Not as described
Reviewed in the United Kingdom on 21 January 2021
Verified Purchase
Mine arrived with lots of scribbles and writing on the pages. Not the condition this was described as so initially disappointed. Will make a great read nonetheless
Read more
Report abuse

Bookworm
5.0 out of 5 stars Must try
Reviewed in the United States on 24 January 2017
Verified Purchase
I bought this book for my 10 year old nephew who hates to read but is a big basketball fan. He called me a week lawyer to tell me he loved the book and is almost done reading it. I am really happy that he loved it. It's aimed for young adults so writing is easy to understand and storyline is insporational. He is now done reading it and now I'm back on amazon looking for more books to gift to him
Read more
11 people found this helpful
Report abuse

Laura Booksnob
4.0 out of 5 stars Heart pounding action on and off the bball court
Reviewed in the United States on 15 August 2013
Verified Purchase
"Live Radio Broadcast of the Game.
There are three broadcasters, a play by play man, a color commentator, and sideline reporter", Laura also known as Book Snob.

Note: The book review of Final Four will be written in a similar format to parts of the book.

Color Commentator: Ladies and Gentlemen, this is it, the final four, the big game between Michigan State Spartans and underdog, Troy University Trojans. Who will win remains to be seen, but both sides are anxious to move up to the championship game. "The last time the Spartans and the Trojans met for stakes this high was in the Trojan War of Greek Mythology, when the Spartans left a huge horse outside the gates of Troy." pg. 6. I wonder, will the Trojans rewrite history here tonight?

Side line reporter: There are 4 main players being represented in tonight's game, I mean book.

Malcolm is the leading scorer for the Spartans as a freshman and is ready to make his move into the NBA. He is a little cocky and self-serving but maybe he has earned it. He recently lost his sister in a drive-by shooting and you can see her image tattooed on his arm.

Michael Jordan also plays for the Spartans and you guessed it, was named after the famed NBA star Michael Jordan. Michael is a junior benchwarmer thrown into the game. He is roommates with Malcolm and lives under the shadow of his name.

Roko Bacic AKA Red Bull is a junior playing for Troy. He is a native Croatian who has lived in the states since his senior year of high school. His uncle taught him to play basketball on the streets of Croatia and now he is living his dream, playing college basketball. His parents are very proud of him. His uncle was killed by the Croatian mob.

Crispin Rice: A senior who plays for the Trojans is in love with a girl named Hope and she becomes known as his good luck charm and is nicknamed, Hope of Troy. He proposed to her in front of live television about 6 weeks earlier. I wonder how things are going with this young couple. Crispin needs to remain focused here today as the two teams head into battle.

Play by Play man: I can't believe it folks, we are heading in to overtime tonight. These teams are tightly matched and the players all deserve to come out on top. You will have to read the book to find out what team wins the game.

Volponi, has written a book that takes place entirely during one basketball game. Reading the Final Four is like having front row seats during a competitive game, where you know the key players first hand, their backgrounds, hopes, dreams and even failures. The Final Four is full of court action, interviews, journal entries and play by play commentary.

Side Line Reporter:
I am not a big basketball fan so I am not sure I am qualified to report on the game, but the book was awesome for someone who doesn't know much about basketball. For people who play the game, I can only imagine that they would love a book like this. Final Four is fast paced, full of street courts and college ball, living a tough life and then living a dream. Volponi doesn't shy away from some of the issues related to college ball like the fact that lots and lots of people are making money off the games, yet the players play for free and the aren't allowed to take any gifts or sell any of their tickets for games. It is interesting to look at these issues and more, through the eyes of the players in The Final Four.

Color Commentator: Like basketball? Got Game? Get yourself to The Final Four.

For those who follow me on Twitter and Goodreads, it's no secret that I am a huge fan of Paul Volponi's. I became intrigued by his work when RESPONSE received the Milwaukee County Teen Book Award Honor in 2010. After that, I devoured his novels and dubbed Paul the King of Urban YA Fiction.

THE FINAL FOUR is one of Paul's finest novels. Volponi writes about March Madness, the time when the best college basketball teams play for the NCAA Championship. It's huge money, huge exposer, huge pressure. Volponi tells the story of two teams battling in the Final Four through the eyes of four players. Interspersed are newspaper and TV interviews, commentary. One of the characters is Michael Jordan-imagine what it must be like to love basketball, be named after one of the best players to ever play in the NBA, and always having to deal with being compared to your namesake: THE Michael Jordan. Another character is Malcolm McBride, a young man who'a nickname is "One and Done" because he's only playing one year of college ball until he's eligible to enter the NBA draft. Malcolm's outlook on life has definitely been shaped by poverty and the horrible experiences that have plagued his life. Crispin Rice is a character I really enjoyed, a leader for sure. But his life isn't as storybook as the media makes it out to be. My favorite character is Roco Bacic who survived some horrific experiences in Croatia to come to the US and fulfill his dream of playing basketball. Some of his story is told through a personal journal that captures unforgettable moments of terror.
The reader becomes immersed in the players' lives on and off the basketball court. The novel is rife with raw emotion, tragedy, and triumph.
There were several passages where I shook my head in awe. Even if you rarely on never read realistic fiction, THE FINAL FOUR should be your first. Get swept away in March Madness.
I highly recommend this novel for young men - seventh grade and up - who are reluctant readers. THE FINAL FOUR may very well be just the novel to inspire a love for reading.
Read more
10 people found this helpful
Report abuse

Lulu
5.0 out of 5 stars Five Stars
Reviewed in the United States on 25 September 2017
Verified Purchase
My 14yr old son enjother this book
Read more
2 people found this helpful
Report abuse
See all reviews
Back to top
Get to Know Us
Make Money with Us
Let Us Help You
And don't forget:
© 1996-2021, Amazon.com, Inc. or its affiliates