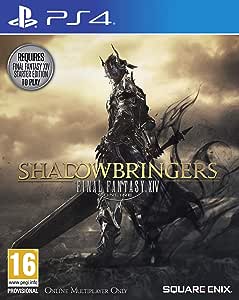 Take part in the next saga of the critically acclaimed FINAL FANTASY XIV Online with the next legendary expansion pack-SHADOWBRINGERS!

Explore breathtaking new environments, encounter exotic new races, master exciting new jobs, and fight alongside prominent characters with the new Trust system as you embark on a new journey as the Warrior of Darkness!

With over 14 million adventurers worldwide, join the next chapter and become what you must. Become the Warrior of Darkness!

-This product is not compatible with the Steam version of FINAL FANTASY XIV Online Starter Edition (A Realm Reborn). If you've purchased FFXIV Starter/Edition A Realm Reborn on Steam, then you must also purchase FFXIV: Shadowbringers on Steam to upgrade your existing account.

Pre-order Shadowbringers for unique rewards ahead of the launch and a head start in early access!

Pre-order bonuses include an accessory that grants 30% increase in EXP when worn, perfect for levelling your jobs to 70 in preparation of Shadowbringers!

Items are planned to begin distribution starting on March 1, 2019.

*The bonus effect will only apply from level 1 through 70. Equippable only by Disciples of War or Magic classes and jobs.

Early access is tentatively scheduled to begin on June 28, 2019 and will allow users the ability to play Shadowbringers before the official release!

How do I redeem my preorder code?

Insert your unique code in the entry form on screen and click to validate.

A confirmation page will appear displaying platform selection options. Select and confirm your platform to receive your code and instructions.

If you have any questions regarding the above information, please contact the Square Enix Support Centre.

josephine laing
5.0 out of 5 stars Realy good buy!
Reviewed in the United Kingdom on 14 December 2019
Platform: PlayStation 4Verified Purchase
Only just getting into this part of the game, and it's grate made some small but realy good improvements e.g. It now tells you if the quest is above or below you. And there are now exp boost on fates.
Read more
One person found this helpful
Report abuse

screengazer
3.0 out of 5 stars Overrated
Reviewed in the United Kingdom on 19 June 2020
Platform: PlayStation 4Verified Purchase
Good story, with plenty of cut scenes, but gameplay hasn't evolved. Too much fetch and carry quests and too many go talk to this guy quests for my liking. If your a fan of the series you'll love it. I found it tiresome and overlong.
Read more
One person found this helpful
Report abuse