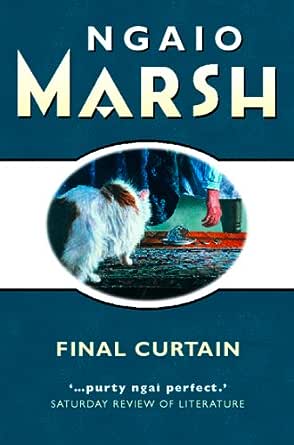 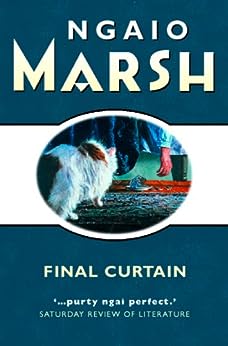 Dame Ngaio Marsh was born in New Zealand in 1895 and died in February 1982. She wrote over 30 detective novels and many of her stories have theatrical settings, for Ngaio Marsh’s real passion was the theatre. She was both actress and producer and almost single-handedly revived the New Zealand public’s interest in the theatre. It was for this work that the received what she called her ‘damery’ in 1966. --This text refers to the paperback edition.

'One moment, Sir Cedric,' Alleyn began. 'Why did you and Miss Sonia Orrincourt plan a series of practical jokes on your grandfather?'

It was not pleasant to watch the blood sink form Cedric's face. The process left his eyelids and the pouches under his eyes mauvish. His colourless lips pouted and then widened into an unlovely smile. 'Well really!' he tittered. 'That just shows you, doesn't it? So darling Sonia has confided in you.' After a moment's hesitation, he added: 'As far as I'm concerned, dear Mr Alley, that's the end of darling Sonia…'

‘A better novel than a detective story.’
Toronto Globe and Mail

‘The finest writer in the English language of the pure, classical puzzle whodunit. Among the crime queens, Ngaio Marsh stands out as an Empress.’
The Sun

4.3 out of 5 stars
4.3 out of 5
31 global customer ratings
How does Amazon calculate star ratings?
Amazon calculates a product’s star ratings using a machine learned model instead of a raw data average. The machine learned model takes into account factors including: the age of a review, helpfulness votes by customers and whether the reviews are from verified purchases.

Lacey Green
5.0 out of 5 stars That which should accompany old age...
Reviewed in the United Kingdom on 31 July 2013
Verified Purchase
Ms Marsh invites the reader to a hideous Victorian mansion whose pretentious ugliness reflects the dysfunctional family in residence. The tale is vividly of its time: the war is staggering to its close, rationing has encouraged overseas friends to send canned food to Britain, childish tricks can spur on homicide and Agatha Troy is commissioned to paint a silly, grand old man of the theatre whose 'borrowed robes' are too big for him...

Ms Marsh's novels interest me because she shows how serious crimes are rarely the result of impulse but have been brewing for years. They are the outcome of many small life-events, perceived slights and insults, however mistaken, that twist the perpetrator's view of themselves and their victim. What the killers have in common is their focus on self, in which the decision that the victim has no right to live comes to seem logical and justified. Ms Marsh comes back to 'Macbeth' at the end of her writing career' in 'Light Thickens', another compelling read that shows her deep-rooted pity for warped humanity and at the same time her faith in the regenerative powers of kindness and courage.

I would recommend 'Final Curtain' to anyone who likes a bizarre puzzle and a wide range of characters living in a damaged wartime society, where old values and patterns of power are challenged and money is still the root of all evil. The book is sometimes comic, sometimes pathetic, always true to its purpose, which is to show the terrible consequences of 'vaulting ambition.' The Scottish Play is here only a part of the theatrical history and fantasy of an actor whose 'life is fallen into the sere, the yellow leaf.'

Damaskcat
5.0 out of 5 stars Tangled family relationships
Reviewed in the United Kingdom on 26 December 2010
Verified Purchase
Agatha Troy - artist - is married to Roderick Alleyn - a Scotland Yard detective. Troy, as she is usually known, is commissioned to paint a portrait of Henry Ancred at his country house, Ancreton. It is clear from the start that the members of his family do not get on and that Sir Henry's mistress, Sonia, is very unpopular.

Troy endeavours to stay out of the arguments as she wants to get the portrait finished as soon as possible and get home in time to welcome her husband who has been away for over three years working for Special Branch. Sir Henry is found dead just before Troy leaves and she finds herself unwillingly mixed up in a murder enquiry that her husband is investigating.

This is a detective story in the classic mould and it will appeal to readers who enjoy Dorothy L Sayers, Gladys Mitchell, Patricia Wentworth and Agatha Christie. I found it an intriguing story with some interesting characters and it kept me guessing until almost the end. I liked the writing style and found that the scenes and characters came to life as I was reading. Very enjoyable and I shall be reading other books by this author.

Amazon Customer
5.0 out of 5 stars Final Curtain - Ngaio Marsh
Reviewed in the United Kingdom on 14 August 2019
Verified Purchase
A Kindle book. Very fond of Ngaio Marsh, despite the slightly dated nature of the stories. A good read.
Read more
Helpful
Sending feedback...
Thank you for your feedback.
Sorry, we failed to record your vote. Please try again
Report abuse

SaggyBaggyGrumpy
5.0 out of 5 stars What a ghastly child
Reviewed in the United Kingdom on 23 February 2013
Verified Purchase
This must be one of Marsh's best. Most of the characters are so terribly theatrical darling, and likeable ones thin on the ground apart from the regular ones. The whole Ancred family is grotesque, the child Panty (yeugh!) is foul. My entire sympathy is for the poor cat. I have read all Marsh's books and wish there were more.
Read more
Helpful
Sending feedback...
Thank you for your feedback.
Sorry, we failed to record your vote. Please try again
Report abuse

Ron
5.0 out of 5 stars Good thriller
Reviewed in the United Kingdom on 15 August 2013
Verified Purchase
Anyone who loves N Marsh will have to have this in their collection. A very good read. I keep them and read over again.
Read more
One person found this helpful
Helpful
Sending feedback...
Thank you for your feedback.
Sorry, we failed to record your vote. Please try again
Report abuse
See all reviews
Get FREE delivery with Amazon Prime
Prime members enjoy FREE Delivery and exclusive access to movies, TV shows, music, Kindle e-books, Twitch Prime, and more.
> Get Started
Back to top
Get to Know Us
Make Money with Us
Let Us Help You
And don't forget:
© 1996-2020, Amazon.com, Inc. or its affiliates