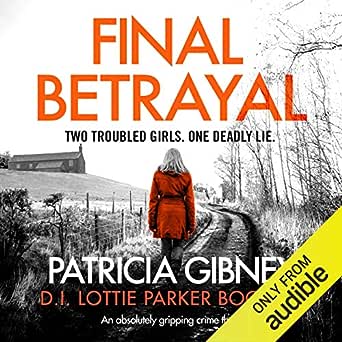 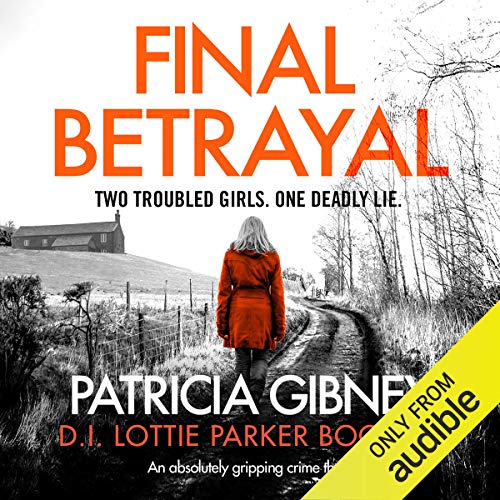 4.6 out of 5 stars
4.6 out of 5
1,322 global ratings
How are ratings calculated?
To calculate the overall star rating and percentage breakdown by star, we don’t use a simple average. Instead, our system considers things like how recent a review is and if the reviewer bought the item on Amazon. It also analyses reviews to verify trustworthiness.

Jennifer Brown
5.0 out of 5 stars Do you know where your children are?
Reviewed in Australia on 24 July 2019
Verified Purchase
I do enjoy the series, from the hip hazard Lottie to the always calm Boyd and the horribly ridiculous super, becomes very engaging. In this book, Lottie takes a trip down memory lane to her past, present and end to a horrid future she could be facing.
Plenty of twists and turns, horrid murders, and an unpredictable and makes this indeed a good read. Nailbiting, but keep your tissues ready.

Libby Diedrich
5.0 out of 5 stars Great book in the Lottie Parker series
Reviewed in Australia on 6 July 2020
Verified Purchase
All the Lottie Parker books in this detective series are excellent. I read them out of order, but wish I had read them in order as Lottie's personal story carries through all the books. Irish crime fiction makes a refreshing change from standard UK crime stories.I would recommend starting with the first book, then read through the rest, everything would make more sense. i feel like I know Lottie now, and empathise with her through all her trials!
Read more
Helpful
Report abuse

sue wells
TOP 500 REVIEWER
5.0 out of 5 stars What a cracker!
Reviewed in Australia on 28 August 2019
Verified Purchase
What a cracker of a book. I think that Patricia Gibbney has outdone herself with this book. It was well-written, with all the twists and turns leaving Lottie Parker to sort it all out.
Read more
Helpful
Report abuse

Shawn
5.0 out of 5 stars Final Betrayal
Reviewed in Australia on 18 October 2019
Verified Purchase
This book exceeded evey single expectation I could think of! If i could describe this book in three words they would be: Thrilling, Action paced and Nail - Biting. I hope you enjoy this Thrilling, Action packed and Nail - Biting book as much as I did.
Read more
Helpful
Report abuse

Pam Campbell
5.0 out of 5 stars Need to read them in order
Reviewed in Australia on 11 May 2019
Verified Purchase
Absolutely thrilling series very well written have enjoyed following the journey of Lottie Parker and her family with the murder mysteries mixed in. Hope there will be more.
Read more
Helpful
Report abuse

Jo-Anne Quinn
5.0 out of 5 stars Intriguing
Reviewed in Australia on 7 October 2020
Verified Purchase
I did like this read. Always enjoy Lottie Parker cases. This kept me wondering and trying to sort folk .
Read more
Helpful
Report abuse

LoveLea
5.0 out of 5 stars Brilliant
Reviewed in Australia on 5 August 2020
Verified Purchase
Another great read from Patricia. I can’t wait for the next book to see what’s in store for Lottie & Boyd’s relationship.
Read more
Helpful
Report abuse

my opinion
5.0 out of 5 stars Final Betrayal
Reviewed in Australia on 15 July 2019
Verified Purchase
I enjoy a continuing character, and Lottie is a ery human and relatable character, even if her life is not.
Compelling reading

Gill Elliott
1.0 out of 5 stars Predictable
Reviewed in the United Kingdom on 26 June 2019
Verified Purchase
Sorry about the one star, and that low rating is not because of the plot lines or even the story it’s just that I’m heartily sick of the main character Lottie, I really really enjoyed the first book in this series but by book 3 her chaotic life style, the attitude to Boyd her frantic searches for another Xanax that’s lurking in her bag or jeans pocket or the desk drawer and her trouble prone children that never seem to learn from past mistakes has just become too much, and don’t get me started on her living in a grace and favour house owned by a criminal! Also whilst I’m having a rant surely in this day and age Lottie’s superior would NOT be able to speak to her like he does. It’s a real shame because this author has a great flair it’s just book six is just a rehash of books 1 2 3 4 and 5 Sorry!
Read more
9 people found this helpful
Report abuse

BigDog
3.0 out of 5 stars Things need to change
Reviewed in the United Kingdom on 10 July 2019
Verified Purchase
If you haven't read any of the Lottie Parker books then do read them. They are very well written with good storylines. I am very pleased Lottie has stopped drinking and taking Xanax-good start. However, this last book especially has become rather predictable. Her half sister is on the loose from a secure (??) mental asylum- she apparently is given a day pass at the request of Lottie's NYPD brother Leo.... (really???) . Then instead informing the authorities and securing her family she actively seeks the person out putting everyone at risk. She's lost a member of her team due to them being stabbed and killed by said half sister but she still doesn't heed warnings, she still doesn't wait for back up, she still ignores basically every sane rule in the book putting the lives of members of her team at risk. The amount of injuries she has sustained is incredible but she never has a day off sick. Battered and bruised from an explosion she still goes into work like some police version of Rasputin. Her stomach rumbles again more times than she calls her favourite (but wrong) chief suspect in for questioning. She is incredibly unprofessional and whilst I have no love for the McMahon there is absolutely no way that she is suitable material for promotion to Superintendent. In any normal police force she would have been sacked or medically retired through injury. If she were my mother I'd have left home years ago. The other storyline in the book was very weak this time too. Not believable at all. A stonking great clue is given about two thirds in but no-one picks up on it- why? Telling people who the murderer is and then going off on a tangent for the rest of the book until- oh yes! that's who it is. The storyline just was not believable at all. I was very disappointed with this book and I really hope that the next one will be better or I may have to give up on a series I love
Read more
5 people found this helpful
Report abuse

Col
2.0 out of 5 stars Had high hopes for this series but was incredibly disappointed.
Reviewed in the United Kingdom on 21 March 2020
Verified Purchase
I am Irish, I support the incredibly Irish female crime writers coming out of Ireland right now like Liz Nugent and Jo Spain. I had high hopes for this series and I bought all five books so that I had continuity.
To say that I am disappointed is an understatement. I find Lottie to be an underdeveloped and incredibly unlikeable character. I understand that her back story is being widowed but she also appears to be incredibly selfish, leaving her kids to fend for themselves while she goes off and unprofessionally misses clues that are in her face, and treats suspects with a level of unprofessionalism that if it were to happen in real life would be referred to GSOC!! Also why is it one or more of Lottie's kids is always in the thick of it no matter what is happening while she fecks off back to work and thinks that she must check on them but never bothers. I mean in one of the series, her kid finds a body and off she goes back to work barely gives him a second thought. In the one I'm reading right now her daughter is self harming, there is blood on the floor, she's behaving very out of character but her Mother ignores it all and once again puts dealing with her kids on the back burner. In another there is a woman who is elderly and described as being forgetful, - alluding to a presentation of Alzheimers yet Lottie shouts at her as she "digs her nails into her palms" (she does this often!)to give the phone back. In real life who let alone a senior investigating officer would treat an elderly person this way when it has been explained that she has Alzheimers. At all times Lottie appears to be missing something - maturity, empathy and cop on being among some of them.
As for Lottie's approach to police procedure - she walks all over crime scenes doing what she likes, rarely follows a chain of command I mean her attitude is that she will do whatever she wants and who cares about procedures, chain of evidence etc. Crime scene contamination is the order of the day.
I will keep reading as I have bought these books but oh my goodness Lottie and her attitude stinks and border on contempt. If police behaved like her in real life not only would they be under review but all of their cases would too for contamination of evidence.
Sadly just not good in my opinion.

b.giles
2.0 out of 5 stars Bored with characters
Reviewed in the United Kingdom on 25 May 2019
Verified Purchase
I've read all of these Lottie Parker books and during this one I found myself becoming increasingly fed up with her character. The plots are all becoming the same. Would you still go to work if your family is under threat by a half sister who has already murdered people? All the injuries that Detective Parker sustained would have put her in hospital. I know for dramatic purposes the truth has been to be a bit suspect but this did suspend belief a bit too much. I shan't buy any further books in this series if any are written. A shame that what started out as quite a good idea has grown stale.
Read more
4 people found this helpful
Report abuse

Kindle Customer
3.0 out of 5 stars What to say
Reviewed in the United Kingdom on 30 April 2019
Verified Purchase
I've read all the lottie books because the basic storylines are good plus the author writes extremely well. The main character is somewhat annoying to say the least I can't believe anyone could live their life that way ,but back to the book ,a demented killer who was only convicted one year earlier having murdered numerous people and nearly killing said detective is let out of a psycho ward on day release (no explanation how this was managed) said detective is informed of this but instead of calling in the troupes she tell one man to find her and doesn't notify the police even though she's aware this psychos only wish is to kill her and her children ,she and her partner are injured by concrete slabs falling on them but still manage to drive ,go back to work and function without any sleep for a further 2 days. Yes I know its fictional but please we reader aren't completely thick
Read more
3 people found this helpful
Report abuse
See all reviews
Get FREE delivery with Amazon Prime
Prime members enjoy FREE Delivery and exclusive access to movies, TV shows, music, Kindle e-books, Twitch Prime, and more.
> Get Started
Back to top
Get to Know Us
Make Money with Us
Let Us Help You
And don't forget:
© 1996-2021, Amazon.com, Inc. or its affiliates