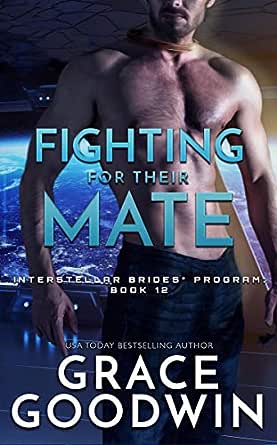 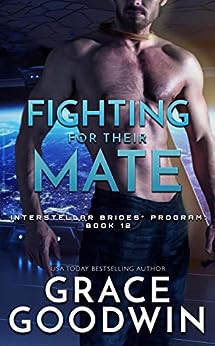 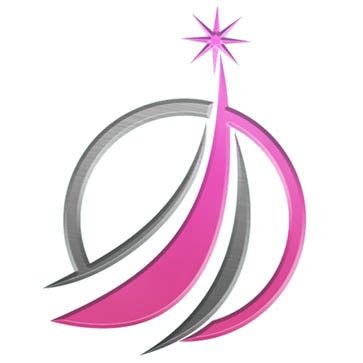 Once a commander with the Intelligence Core for the Coalition Fleet, a mission gone wrong forced Chloe to return to Earth injured and dishonored. But she's seen too much and is restless in civilian life. This drives her to do whatever it takes to return to space, to where she belongs, so she volunteers as an Interstellar Bride. She's shocked to discover her mate is human, but he's like no one else she's ever met...and he's taken a second, a huge Prillon warrior equally determined to seduce her body and win her heart.

ReCon Captain Seth Mills lost both of his brothers to the Hive and vows to continue fighting. His bride is an unwelcome shock and he agrees to the Prillon custom of taking a second to protect the innocent woman destined to be his. No matter how determined he is to resist her allure, one touch, one kiss, and he knows he can never let her go.

Although she surrenders to their dominant touch, Chloe is no innocent. She's a commander with secrets she can't share. And when the entire Battlegroup is caught in a deadly Hive trap, she's the only one who can save them all, no matter the cost. But Chloe's mates won't let her go into battle alone. No matter the risk, they're willing to sacrifice everything...and fight for their mate.
See all Product description

Leisha Andrews
TOP 500 REVIEWER
5.0 out of 5 stars Recommended reading
9 May 2018
Format: Kindle EditionVerified Purchase
I do like Grace Goodwin’s scifi Romances. I’ve read them all and I keep reading them. They are perfect for being that “downtime” book that you sometimes just need to switch off. They are well written and keep you interested as a reader without overtaxing you.
Read more
Helpful
Comment Report abuse

Karen Nastasio
TOP 500 REVIEWER
5.0 out of 5 stars Wow great book
4 January 2018
Format: Kindle Edition
Grace Goodwin you are the best I loved this book and as always I couldn’t put it down I’m drawn into the whole idea of a better life that’s not on earth 🌏 with that being said Seth is a captain of his men that is in engaged in the war against the hive Dorian is his best friend and is a pilot fighting the same thing the hive and together they are a great team and this is there life and they are willing to die for it. Seth sister has been begging him to join the interstellar bride program but he has his reasons but she never gave up and reluctantly he get tested and all is forgotten until the commander tells him that he has been matched and his bride is on her way to him not thinking he tell the commander no send her back but he knows that’s not how it works, his friend Dorian wants a private word with him alone once alone he asks why he doesn’t want his mate after telling him why Dorian says I will be your second if something happens to you she will have me to care for her and our children Seth wonders if it could work he is not a privillion warrior but a earthling and they don’t have two men per one woman as is customary for Dorian’s people but if it worked he could have the wife and family he has always wanted Seth agrees and together they go to the transport station to wait her arrival. Chloe is not your normal bride she has been into space and fought the hive and saved many lives but she was injured and blamed for what happened and was sent home, after some time she wants to go back into space and this is her only way off earth by becoming a bride after her testing and how hot her mates made her she has no doubts about them keeping her happy and safe. Transferring now... Does it all work out I what to tell you more but I don’t want to spoil the story for you, would I recommend this book hell yes you will loved it. I voluntarily reviewed an arc copy of this book for an honest review.
Read more
Helpful
Comment Report abuse

Chrissi
TOP 500 REVIEWER
5.0 out of 5 stars Devoured it!
5 January 2018
Format: Kindle Edition
This author has done it again !! I have absolutely devoured every book in this series and this one was no exception! HOT HOT HOT!!
Read more
Helpful
Comment Report abuse
There are 4 customer reviews and 6 customer ratings.
See all 4 customer reviews
Write a customer review

La Blue
5.0 out of 5 stars GOD, I LOVE this series and the ...
13 February 2018 - Published on Amazon.com
Format: Kindle EditionVerified Purchase
spinoff series “The Colony” (which is my favorite, but not enough stories in that line yet). I love not just the romance but the UNIVERSE that GG has created with this series! It’s more than just a world build for this very clever sci-fi series but a more elaborate universe that encompasses sci-fi, romance, adventure, discovery and intense danger.

GG has created something so filling it’s up there with Star Trek, Star Wars or Dr Who. All this while being an adult erotica and a gripping read! I found this series when I was searching for sci-fi romance and boy I have NOT been disappointed. Although I get bored with all the sex scenes (in all the books there are ALOT of them and very graphic!) I think it’s definitely more a sci-fi story. The investment into the creation of this universe is extensive and really should not be over looked.

GG hurry and write more! I like to pile them up (a few books) and then binge read them all at once! I can’t get enough of the Atlans, Prillons and Warden Egara! I like all the other species too but those are my favorites. I’m also interested in the possibility of rescuing more assimilated hive drones. I love there stories in “The Colony”. Maybe one day learning more about the Hive and defeating them! ☺️

SLF
5.0 out of 5 stars Fabulous adventure
21 March 2018 - Published on Amazon.com
Format: Kindle EditionVerified Purchase
Wow, what a fabulous adventure. Chloe was a former special ops type of warrior who had almost gotten killed because of a co-worker. He had placed the blame for the failed mission so she had been returned to Earth, working as a 911 operator and never being allowed to return to work. She signs up for the Interstellar Bride program thinking she will be sent to some other planet but is, instead, sent to a battle ship to meet her mates. The Commander of the ship finds out about her top secret background and she is recruited to do the same type of job she had previously done. She is such a strong warrior and to have a female holding such power was fabulous. The fact she out ranks her mates is frosting on the cake. There is steamy sex between mates, dangerous battles and much more happening in this book. It kept me on the edge of my seat from start to finish. I've read some of the Interstellar Bride books and they were great but this one was out of this world!
Read more
One person found this helpful

ICU2QTPI
5.0 out of 5 stars Loved it
5 January 2018 - Published on Amazon.com
Format: Kindle EditionVerified Purchase
I F'Loved this book. It had intrigue galore. The Hive is closing in on the Coalition and our heroine, Commander Pham, who also happens to be a new bride to Captains Mills and Kanakor, is determined to save Battlegroup Karter. Along with help from Warlord Anghar, an Atlan beast, saved from the Hive by the Captain's, she embarks on a death defying mission to bring down the Hives latest weapon of mass destruction. This series has everything you love about sci-fi romance. The love and devotion between our protagonists is palpable. I can't wait to find out who gets a bride next. I hope it's Anghar. He deserves some happiness. 😊
Read more
One person found this helpful

Kindle Customer
5.0 out of 5 stars A great romantic sci-fi novel
8 February 2018 - Published on Amazon.com
Format: Kindle EditionVerified Purchase
Chloe was a fighter for the Coalition until she was betrayed and forced out. She signed up for the Bride program so she could return to space where she felt she belonged. Seth is from Earth. He lost two brothers to the Hive and he won't stop until he destroys them all. Seth is assigned a mate. He doesn't want her. Then Dorian a Prillon agrees to be his second. Neither Seth or Dorian expect what they feel when they have Chloe in their arms. This is a sweet story filled with two, protective loving men and a head-strong, warm female. Loved this story from the first sentence and it only got better. I am so looking for the Atlans warrior story. I hope that is next. I still have my fingers crossed that Warden Egara will find love in space.
Read more

Jan
5.0 out of 5 stars Can't wait till the next book
23 February 2018 - Published on Amazon.com
Format: Kindle EditionVerified Purchase
YEAH! I love these stories. And the fact that we have a human mate, male in the mix makes it so much more fun. I'm glad to read that Seth finally found happiness. He and his best friend, Dorian a Prillian, work so great together. Toss in Chloe with her skill and intell. I love when the women have a stronger role. Even though we know they all have secrets do to their missions and jobs it is interesting to find out more and more about the Hive. The Hive is more of a threat then ever before. But with what Chloe knows and our two guys loving and protecting her, we will crack this.

I cant wait for what is to come next. Perhaps Commander Karter with find someone or even Warlord Anghar or even our Warden with the Interstellar Bride. They all need to find love. Perhaps all them together.


Read more
Go to Amazon.com to see all 169 reviews 4.7 out of 5 stars
Get FREE delivery with Amazon Prime
Prime members enjoy FREE Delivery and exclusive access to movies, TV shows, music, Kindle e-books, Twitch Prime, and more.
> Get Started
Back to top
Get to Know Us
Make Money with Us
Let Us Help You
And don't forget:
© 1996-2020, Amazon.com, Inc. or its affiliates