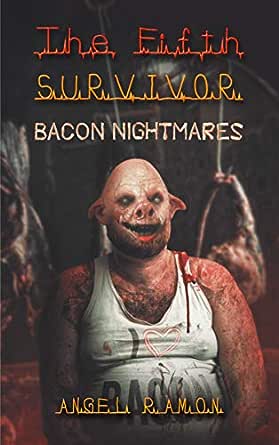 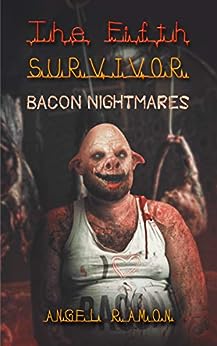 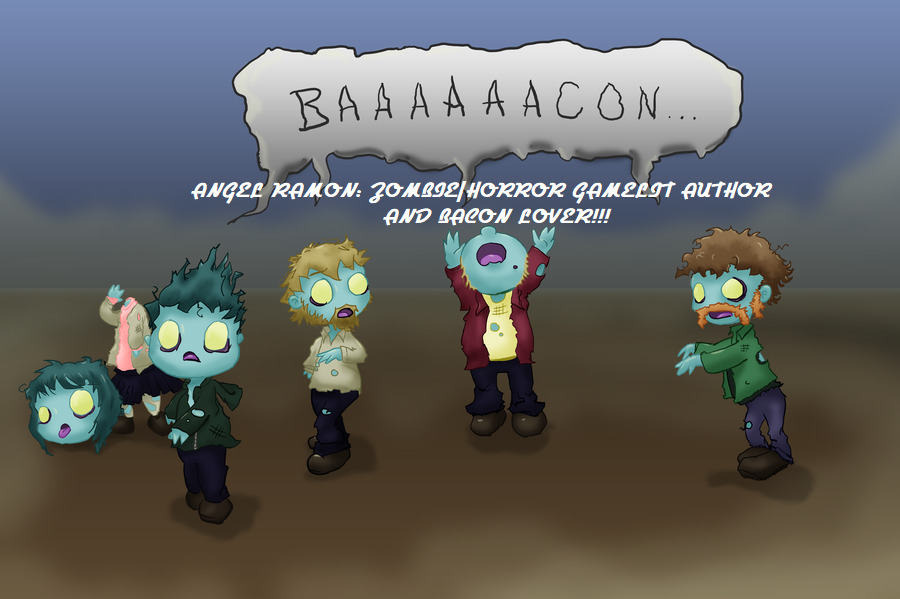 George's favorite breakfast item turns into his worst nightmare! Can George survive his worst nightmare, where pieces of bacon and pigs try to eat his brains out? George will have to kill the tainted swine just to survive. This is the first side quest of The Fifth Survivor. This is where bacon, zombies, pigs, and overly sugary sodas combine to create the ultimate Gamelit horror comedy side quest. YOU DO NOT NEED TO READ THE ACTUAL SERIES TO READ THIS BOOK. IT CAN BE READ AS A STANDALONE BOOK.

As you may well know, George has an unhealthy obsession with Bacon and he can’t stand a day without eating it. After leaving Dawn’s house and figuring out what to do in Episode 4, he decides to take a nap. The problem is George decides to have a huge bacon and egg hero to eat before lying down.

Thinking everything is ok, he catches up on some much-needed sleep. When he opens his eyes, he sees that the refrigerator is broken down and the bacon inside begins to get spoiled. George realizes there’s a warehouse that sells refrigerators and decides to take a ride there. Not wanting to miss out on his favorite breakfast item, he grabs his weapons and heads out.
What he doesn’t know is that he’s in a dream where his favorite breakfast item is trying to eat his brains. It only gets better or worse when he sees sushi zombies that come out from the sushi restaurant that just opened and a place that George has no intention of ever visiting.

Can he survive his worst nightmare and get a new refrigerator for his apartment? The biggest question, is this an actual dream or just a really bad reality for George? Find out in this side quest that could make George turn into a vegetarian and abandon his favorite food. After this side quest, George might no longer carry the name of the bacon-loving vigilante. The big question if George survives is, will he learn a single thing?

Warning: Will contain bacon zombies, zombie pigs, and other things that will cause nightmares for bacon lovers. If you’re a big eater of bacon, you might want to turn away or better yet… Turn Back!

BuckyReview
5.0 out of 5 stars Like playing Resident Evil...but better, and with Bacon!
31 May 2019 - Published on Amazon.com
Verified Purchase
As a fan of Angel’s Fifth Survivor series, I was really excited to see this side story come out. Admittedly, I have only been able to read the first two books in this series so far. But, with that being said, I saw this one could be read without having to read all the others so I picked it up.

Overall, I was very impressed. Angel Ramon continues to improve with each book. The characters and fights are very well done. It takes a little bit to get used to the style in which this is written. Basically, it’s as if it is someone narrating a video game.

You can tell Angel loves gaming as it is reflected throughout the entire story. There are stats, xp updates, and items that the MC (George) finds that help him throughout the story (Bacon soda that heals and increases strength) Once you get used to the style it is really easy to immerse yourself in it.

There are quite a few good one liners throughout the story, and I found myself laughing quite a bit. Man eating bacon zombies and other bacon enemies add a funny twist to the normal zombie novel.

I was a big fan of the sniper in the story, and am excited to see what happens next.

As far as constructive things go, there are a few misspelled words and missing punctuations, but nothing that takes away from the story.

If you are wanting to explore a bit of fun zombie Gamelit and support an up and coming indie author, I’d suggest giving this one a shot.

(I originally preordered the ebook version, and once I saw the cover I knew I needed the paperback as well.)

Ian Mitchell
5.0 out of 5 stars A lot of fun
25 May 2019 - Published on Amazon.com
Verified Purchase
It's not every day that I get to be a ninja, doing acrobatics and throwing shuriken. I enjoyed the heck out of this one even if George looted my corpse. I definitely had some chuckles reading this one which is my favorite so far of the series. I think zombie books should be ridiculous at times. At least I wasn't the first to die. Thanks for the laughs, Angel Ramon.
Read more
2 people found this helpful

Elaine Emmerick
5.0 out of 5 stars A 5⭐⭐⭐⭐⭐ Nightmare!!
26 May 2019 - Published on Amazon.com
Verified Purchase
What can I say about "Bacon Nightmares"? It's a comedic thriller with twists and turns!

George is a bacon-loving guy - he even tried bacon flavored soda which gives him extra energy.

The question George asks is "was it a dream or has Hybrid mutated food too"? You'll have to read it to find out!

Angel continues to write stories that catch you by surprise! His creativity is evident on every page! I continue to look forward to his books!!
Read more

Joshua Griffith
5.0 out of 5 stars Bacon consuming people!
23 August 2019 - Published on Amazon.com
Verified Purchase
Is this real life or is it fantasy that George is caught in? Our beloved bacon loving vigilante faces off against bacon zombies! Oh the irony. What a delicious way to go but George isn't going out without a fight. Not only is there bacon zombies but sushi zombies too. He ends up at a bacon factory with his friends to stop Hybrid from tainting his favorite breakfast food but discovers more horrors than he could have imagined. Is this a dream? Grab a copy and find out for yourself! I highly recommend this one!
Read more

LitRPG Re-Roll
3.0 out of 5 stars I was hoping for more gore and violence.
25 May 2019 - Published on Amazon.com
The big thing that drew me to the book was the cover. I consider myself a pretty big horror fan and I thought the cover looked creepy and gory. I hadn’t planned on reading it, but since it said it could be read as a standalone book I put it on my Kindle. This is my first journey into the Fifth Survivor universe, so some of the things I may not understand is because I haven’t read any other entries into the series. For instance, I know that George is the MC but I don’t have any clue about his history. I can accept that, I haven’t read the other books. This particular book is a satire on zombie survival and the world’s love for bacon. Bacon is attacking people, pigs are attacking people, pig zombie men are attacking people, even sushi zombies are attacking people. It gets rather crazy.
I found myself chuckling at some of the situations. I am not 100% sure but this series maybe geared more toward young adult demographic. It isn’t very complex and the dialogue is a bit juvenile. From the looks of the cover, I was hoping for a little more violence, gore, and for the plot to be more unnerving. Which wasn’t the case, it wasn’t really all that gory at all. My biggest advice to the author in future books is to try and show instead of just tell. For example, there was a part in the book where the MC is in a room with zombies in it. The book just says – George took out all the zombies like a badass. That is telling me, I would like you to show me how George was a badass.
If you are looking for a simple and fun little romp into a bacon zombie apocalypse, you will find some enjoyment here. Like I mentioned this book is more geared to a younger demographic or at least it seems that way to me. I give Bacon Nightmares a 7.0 out of 10.
Read more
2 people found this helpful
Go to Amazon.com to see all 16 reviews 4.7 out of 5 stars
Get FREE delivery with Amazon Prime
Prime members enjoy FREE Delivery and exclusive access to movies, TV shows, music, Kindle e-books, Twitch Prime, and more.
> Get Started
Back to top
Get to Know Us
Make Money with Us
Let Us Help You
And don't forget:
© 1996-2020, Amazon.com, Inc. or its affiliates