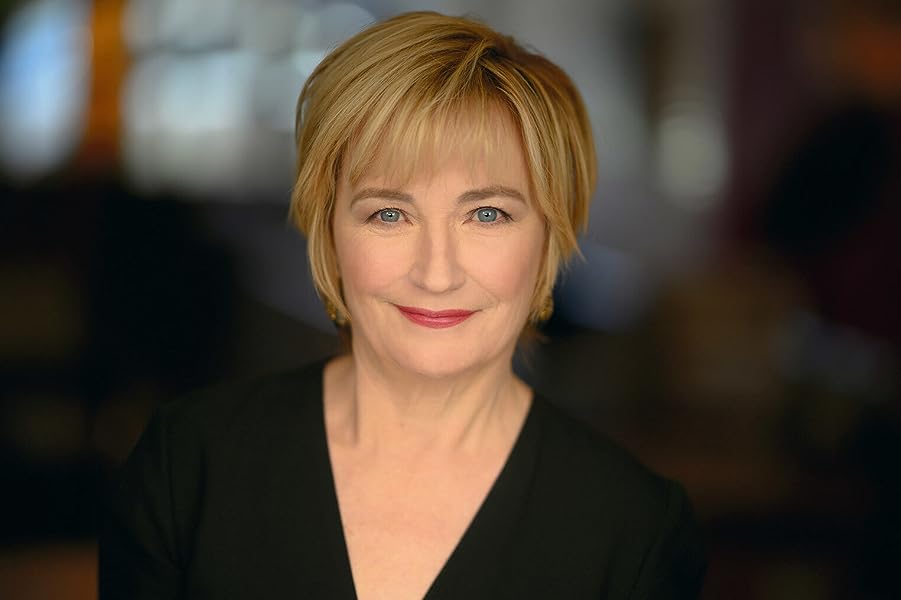 by Kate White (Author)
4.4 out of 5 stars 43 ratings
See all formats and editions
Sorry, there was a problem loading this page. Try again.

"Kate White's newest thriller The Fiancée is a perfect poolside or beach read, as this psychological thriller has everything a great summer read needs! Told in an almost locked-room style, as we are secluded at a wealthy family's sprawling estate, this mystery looks at what appears to be a picture-perfect family. . . . the constant threatening feeling in the air propels this psychological thriller to a truly surprising climax."--Nerd Daily

Praise for THE FIANCÉE: A tense, simmering, fast-paced mystery, Kate White's latest captivating thriller explores the secrets that lurk just under the surface of a picture-perfect façade. I raced through this story about a close-knit family's annual gathering at an idyllic estate that quickly turns deadly. THE FIANCÉE kept me guessing until the very end, never sure who to trust--or where the danger was hiding. --Megan Miranda

Kate White's THE FIANCÉE is exactly what we all need right now: a fast-paced, perfectly woven murder mystery, with a hearty dash of family drama. This one must not be missed!--Aimee Molloy

Kate White is the New York Times bestselling author of eight standalone psychological thrillers, including Have You Seen Me? (2020) and the upcoming The Fiancée (June 2021), as well as eight Bailey Weggins mysteries, including Such a Perfect Wife, which was nominated for an International Thriller Writers Award. Kate, the former editor-in-chief of Cosmopolitan, is also the author of several popular career books for women, including I Shouldn't Be Telling You This: How to Ask for the Money, Snag the Promotion, and Create the Career You Deserve and Why Good Girls Don't Get Ahead, as well the editor of the Anthony and Agatha Award-nominated The Mystery Writers of America Cookbook.

Bristol Book Blogger 📚📖📓
3.0 out of 5 stars Not as expected
Reviewed in the United Kingdom on 15 July 2021
Verified Purchase
I really wanted to like this novel. The bones of a good story are there, and having purchased it on recommendation and because it cost twice the price of any hardback I've ever purchased I felt compelled to keep going even when I found myself skimming pages of internal monologue. However, the characters are flat, I never believed the protagonist's suspicions because she seemed a bit bonkers, and although I had no idea who done it that wasn't because of some crafty plotting. It's because the antagonist had no motive to kill. It was completely implausible.
Read more
Report abuse

dnkb
2.0 out of 5 stars Dismal
Reviewed in the United States on 1 July 2021
Verified Purchase
This isn't a bad novel. This is a TERRIBLE novel. I admit I pre-ordered it from Amazon. Why? Well, I admit that I've read a few other Kate White novels that I don't remember being awful. And a few authors that I formerly trusted were splashed out all over the cover, recommending this book-- that ended up as a loud defender of clueless, privileged, white, wealthy people.

Actress Summer Keaton and her husband Gabe, along with her stepson, Henry, are visiting Gabe's millionaire parents for the annual summer retreat, along with Gabe's three brothers and their respective significant others. While two of Gabe's brothers are married, Nick, the baby, has arrived with his new girlfriend, an actress who Summer remembers from a few years ago, as they both acted in the same performance. While Hannah doesn't acknowledge their former acquaintanceship (WHY did she LIE about being in that play???!!!) , Summer mentally boils. Hannah is beautiful, charming, and successful, while Summer's career is stalling. When the atmosphere turns grim, and a body shows up, Summer becomes convinced that Hannah is to blame...

Why? Here is where this novel just veers into cuckoo land. Summer suspects Hannah...because SHE DOESN'T LIKE HANNAH. Yup. Clever plotting here. Rarely have I read such a deranged plot device as this novel rolls out--a spoiled, entitled, pouting, rich actress heartily dislikes a "rival" (Hannah has done nothing to earn Summer's enmity, really) SO MUCH that she decides the "rival" MUST be guilty of a felony (I mean, in THEORY, that's nice. I mean, I bet we all wish that people we disliked, or who got better jobs, or had better hair, or nicer cars, would have some whiff of karma come to them. But no one calls the boss to say, "Hey, I know security has been worried about that graffiti on the building. Have you checked out that jerk who just got promoted? You know, Captain All-Star with the great attitude?")!

Until I was deep in this novel, I thought I was reading a satire. Really. The characters in this book inhabit a world that is nothing so much as a soap opera--White Millionaires With Secrets! No one in this family is remotely likeable, or realistic. No one is a fully realized character. The Keatons live a charmed life (Upper East Side! Palm Beach! Estate in Buck's County! Children/In-laws are dermatologists, fine wine importers, fine art gallery owners, except for the lone daughter-in-law of mixed race who works for a philanthropical organization (and always feels left out). The Keaton's maid/housekeeper has an assistant, who is LITERALLY called "Bonnie's helper" the entire time (she doesn't deserve her own name? None of these people would bother to learn the name of someone serving them food, clearing their plates, and washing up after them?). They flit around the novel, in turn snarling at each other, whispering urgently, or, most of the time, ignoring serious issues that most people would talk about, instantly. Summer tries to persuade everyone that Hannah might be either dangerous or a killer, depending on where in the novel the scene takes place.

For full disclosure, I must mention that Hannah is written as a....difficult person, as well, but neither woman is a sterling example in the universe of lovely people.

Summer, I suspect, is SUPPOSED to be a charming protagonist. Instead, she is a vapid, spoiled narcissist, bent on exposing Hannah for absolutely nothing except Summer's own insecurities. Summer investigates a mystery, led only by her pre-existing bias (there's a name for this in research: confirmation bias). Any and all information she discovers leads her inexorably toward the conclusion that yes, Hannah is terrible. And a killer. She must be, because she lied about being in a play.

Until I was at the end of the novel, I held out hope that I was reading something ingenious. Would the whole novel turn and twist into something completely different? Would Summer's sunny life of luxury be a metaphor for something twisted and dark? Would the tone suddenly change into something thoughtful--would Summer begin to look at life academically or critically, stepping into the role of a deft or nuanced observer?

Spoiler: no. It really is what it seems to be. A distressingly simplistic novel about people you probably would never care about.

It's a whodunnit, but as a full disclosure, I was so shocked that the characters were this shallow and unlikeable, that I didn't care. I didn't figure out who the murderer was, but it didn't matter. Kate White can write, as in, she can technically write sentences, but that's a low bar. So should any writer be able to do. Let's have a plot and characters, too.
Read more
23 people found this helpful
Report abuse

Johnna W
5.0 out of 5 stars A twisted thriller!!
Reviewed in the United States on 30 June 2021
Verified Purchase
Wow; what a twisty, suspense filled, tense roller coaster ride! A very well written book, full of twisty turns, which didn’t really get me, but were absolute tense and full of red herrings hoping to have to lean another way! I’m one that’s quite hard to get, as I read way too many thrillers, but did get a couple good shocks in this one! I would definitely highly recommend to my fellow thrill seekers, as this one did offer all the things I seek in the genre, and was absolutely filled to the brim with tension!

Will buzz around and use low Amazon reviewer number on release date!
Read more
11 people found this helpful
Report abuse

Laurel-Rain Snow
5.0 out of 5 stars A TWISTED THRILLER...
Reviewed in the United States on 9 July 2021
Verified Purchase
They had everything they needed for a perfect family vacation: close-knit relatives, a bucolic setting . . . and a murderer in their midst?

Summer’s looking forward to a break from hustling for acting work in Manhattan when she, her husband Gabe, and Gabe’s nine-year-old son arrive at the annual family get-together at her in-laws’ sprawling estate. On the agenda are leisurely gourmet meals, tennis matches, and plenty of relaxation by the pool.

But this year, Gabe’s brother Nick has invited his new flame Hannah, whom Summer immediately recognizes from a few years before. Oddly, her brother-in-law’s girlfriend claims not to know her. Yet she charms the other family members, and after Nick announces that he’s proposed to Hannah, Summer doesn’t have much choice but to grin and bear it.

Then the reunion is rocked by tragedy when a family member is found dead. Though the doctors attribute the loss to natural causes, a grieving Summer fears that the too-good-to-be-true Hannah is involved, even as Gabe dismisses her suspicions.

How far will Summer go to expose the truth? As she investigates just what Nick’s fiancée might have done to keep her perfect image intact, she begins to fear that the first death might only be the beginning . . .

The Fiancee opens with a family celebration and some strange events that lead Summer to begin following clues suggesting that her brother-in-law’s new fiancée might be a murderer. But she finds no support for her beliefs from her husband or any others.

Then another person is murdered, and the similar clues support Summer’s theory, while a few additional details make another family member appear to agree.

When Summer is assaulted by one of the least likely family members, her beliefs are turned upside down.

Will the truth finally emerge before someone else dies? A twisted tale that had me guessing all the way through, leading to a 5 star award.
Read more
5 people found this helpful
Report abuse
See all reviews
Back to top
Get to Know Us
Make Money with Us
Let Us Help You
And don't forget:
© 1996-2021, Amazon.com, Inc. or its affiliates