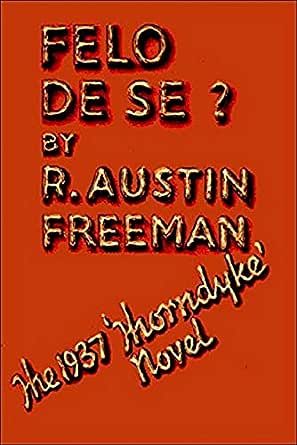 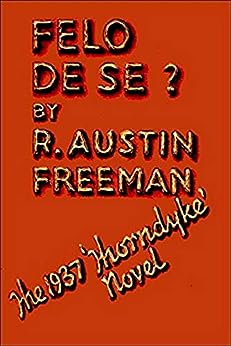 Deemed the father of the scientific detective story, Richard Austin Freeman enjoyed a prolific career that saw him gain qualifications as pharmacist and surgeon, pull off a diplomatic coup along the Gold Coast, work for Holloway Prison and then become a formidable writer of fiction. He was born in London, the son of a tailor who went on to train as a pharmacist. After graduating as a surgeon at the Middlesex Hospital Medical College, Freeman taught for a while and then joined the colonial service, offering his skills as an assistant surgeon along the Gold Coast of Africa. He became embroiled in a diplomatic mission when a British expeditionary party was sent to investigate the activities of the French. Through his tact and formidable intelligence, a massacre was narrowly avoided. His future was therefore assured in the colonial service. However, after becoming ill with black-water fever, Freeman was sent back to England to recover and finding his finances precarious, embarked on a career as acting physician in Holloway Prison. In desperation, he also turned to writing where he went on to dominate the world of British detective fiction, taking pride in testing different criminal techniques. So keen was he, part of one of his best novels was written in a bomb shelter. For the first twenty-five years of his writing career, Freeman was to dominate and remain unrivalled in the world of detective fiction, introducing the well-loved and highly memorable 'Dr Thorndyke'. The continued success of this character has affirmed Richard Austin Freeman s place amongst the finest of crime writers." --This text refers to an alternate kindle_edition edition.

DMT
1.0 out of 5 stars An appalling piece of book production.
Reviewed in the United Kingdom on 9 June 2013
Verified Purchase
Very badly produced, page size far too big and line length too long for the font chosen. Such a same to spoil a good book. Previous purchases in this series have been a good format.
Of the content - Not perhaps his very best, but well up to standard. It is perhaps not a failing that this one lacks the 'love interest' that is often a sub-plot in his long stories. There is a Thorndike formula, which Dorothy Sayers rather cruely gives away in her 'Have his carcase', but he is still well worth reading, and was a significant influence on police procedures, with his insistence on noting all evidence however seemingly irrelevant.

Trevor
5.0 out of 5 stars Five Stars
Reviewed in the United Kingdom on 31 May 2015
Verified Purchase
Maintains Freeman's brilliant style. This completes my full set of his stories, which I read and re-read
Read more
One person found this helpful
Report abuse

Kindle Reader
5.0 out of 5 stars Great Mystery, A Must-Read for Thorndyke Fans
Reviewed in the United States on 24 August 2020
Verified Purchase
I agree with a reviewer that this is one of the best Dr. Thorndyke mysteries. The mystery is intriguing and the plot was well developed, which clearly shows Freeman's talent for mystery writing. The crime is ingenious in a most villainous way. Freeman fairly presents clues for readers to figure and it is such a pleasure following Dr. Thorndyke's exceptional mental process to reconstruct the crime clue by clue. If you love Dr. Thorndyke books and haven't read this yet, this is a must-read.
Read more
Report abuse

AcerAcer
5.0 out of 5 stars One of the very best Thorndyke novels
Reviewed in the United States on 22 July 2013
Verified Purchase
For those not familiar with Dr. John Evelyn Thorndyke, he is a medical doctor who is in addition a lawyer of the type the British refer to as a barrister. The author of these books, the amazing R. Austin Freeman, was himself a medical doctor, and he made sure that all the scientific information in his stories was as authentic as possible, going to the extremes of doing all the tests himself to be certain. Sometimes the stories can get a bit bogged down with medical or other scientific tests and explanations thereof. But not this one. This one moves along fairly briskly, and the inevitable testing that is done is explained fairly quickly.

Felo de Se is a Latin term meaning "felon of himself," and is an archaic legal term meaning suicide, dating back to the times when it was actually a crime to kill oneself. In this story, Thorndyke is given an intriguing problem. The cousin of a man who has committed suicide believes that blackmailers are responsible for driving the man to his death. He asks Thorndyke to find the blackmailers and bring them to justice. The problem is, no one knows who the blackmailers are or even what the man was being blackmailed for.

Thorndyke is very much like Sherlock Holmes in that he reasons things out using pure logic. After that, however, he backs up all his reasoning with scientific tests. Also like Holmes, he has a companion and first-person chronicler (for about 95% of the novels and short stories), in this series named Dr. Christopher Jervis. (Kit for short, although Thorndyke never refers to him that way.) Jervis starts out the series being a medical doctor, but soon after moving into Thorndyke's chambers, he earns a law degree at Thorndyke's urging. This being one of Freeman's later novels (1938), Jervis is totally at ease with Thorndyke and has no problem making fun of himself for not being able to figure out one quarter of what Thorndyke sees at a glance.

Freeman specialized in what he called the inverted detective story. The first part of his books are involved with the commission of the crime, and the second part explains how Thorndyke solves the crime. Sometimes the beginning is narrated by the criminal himself, but most often the part about the crime is narrated by an involved observer who gives all the clues to the crime without even realizing it. By the time you've finished part one, you could theoretically have figured out the entire plot. Freeman never hides anything from the reader but the narrator often deflects us from the salient facts, because he doesn't understand them himself.

There are approximately 26 Thorndyke books (consisting of a mix of novels and short stories) and I've read 22 of them so far, so I feel pretty safe in saying this is an especially excellent one to start reading if you are not familiar with Thorndyke. The language is relatively modern and the narrator for most of the novel is Dr. Jervis, in my opinion the very best of them all, which makes this novel one of the best of the best.

Patto
5.0 out of 5 stars A bold and skillful crime
Reviewed in the United States on 23 August 2012
Verified Purchase
An attractive, cultured young man from Australia squanders his fortune on reckless gambling. When his bank account is empty, he commits suicide. Blackmail letters are found in his desk. This looks like yet another explanation for why this once well-to-do man lost his money and his will to live. His cousin from Australia wants the blood of the blackmailers. Dr. Thorndyke is retained to investigate.

I had to look up the meaning of "felo de se." It's an archaic legal term for suicide, Latin for "felon of himself." Suicide figures large in this story. The reader is treated to two unusual and suspicious suicides.

Thorndyke senses something "abnormal" in the situation before him. Never too quick to accept appearances, he collects all sorts of unlikely evidence and information that seems quite irrelevant to his somewhat dim sidekick Dr. Jarvis. Thorndyke's findings are a total surprise to everyone (me included).

The crime at the heart of this novel is, to quote Thorndyke, "the boldest and most skillful that I have ever known." It's a pleasure to watch the wily doctor connect far-flung dots of circumstantial evidence.

Freeman is especially good at portraying British eccentrics. The standout in this novel is Mr. Weech, custodian of Clifford Inn, scene of the Australian gentleman's suicide. This old relic of the Victorian era wears a frock coat, always carries an umbrella and loves to spout Latin quotes, which he invariably mispronounces.

The novel is devoid of any romantic subplot. The single-minded focus is on Thorndyke's abstruse scientific methods and extraordinary powers of deduction - and the considerable complexities of the mystery.

Some readers might consider the Thorndyke mysteries a bit dated. But for me, the vintage flavor of these books is their great appeal. The deeper I go into the Dr. Thorndyke series, the more I feel that Freeman is my favorite mystery writer from the Golden Age of detective fiction.
Read more
5 people found this helpful
Report abuse
See all reviews
Get FREE delivery with Amazon Prime
Prime members enjoy FREE Delivery and exclusive access to movies, TV shows, music, Kindle e-books, Twitch Prime, and more.
> Get Started
Back to top
Get to Know Us
Make Money with Us
Let Us Help You
And don't forget:
© 1996-2020, Amazon.com, Inc. or its affiliates