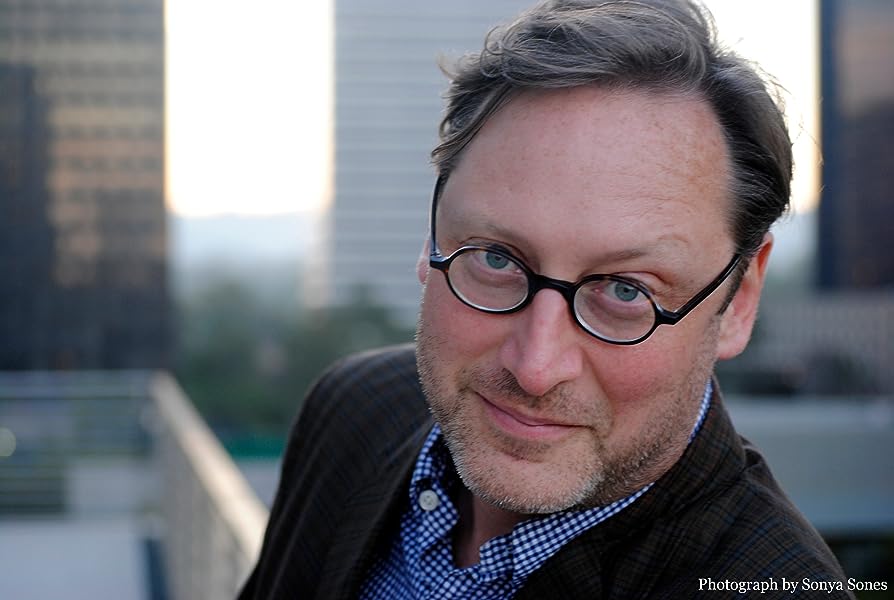 by M.T. Anderson (Author)
4.3 out of 5 stars 1,002 ratings
See all formats and editions
Sorry, there was a problem loading this page. Try again.

Ultimately, though, I don’t read J.K. Rowling — or M.T. Anderson, or Ursula K. Leguin — because of what their books have to tell me about life. I read them because these writers have mastered the ancient magic of storytelling, and because they remind me of what it’s like to be young, living in a world that seems both simple and incomprehensible.

"A triumphant story . . . that will shock and inspire." -Kirkus (starred review)

"In a gripping narrative, helped along by ample photos and shockingly accurate historical details, Anderson offers readers a captivating account of a genius composer and the brutally stormy period in which he lived. Though easily accessible to teens, this fascinating, eye-opening, and arresting book will be just as appealing for adults."

Subversive, vigorously conceived, painfully situated at the juncture where funny crosses into tragic, FEED demonstrates that young-adult novels are alive and well and able to deliver a jolt. ― New York Times

M.T. Anderson has created the perfect device for an ingenious satire of corporate America and our present-day value system...Like those in a funhouse mirror, the reflections the novel shows us may be ugly and distorted, but they are undeniably ourselves. ― The Horn Book (starred review)

The crystalline realization of this wildly dystopic future carries in it obvious and enormous implications for today's readers -- satire at its finest. ― Kirkus Reviews (starred review)

This satire offers a thought-provoking and scathing indictment that may prod readers to examine the more sinister possibilities of corporate-and media-dominated culture. ― Publishers Weekly (starred review)

What really puts the teeth in the bite...is Anderson's brillinat satiric vision in the semaless creation of this imagined but believable world. The writing is relentlessly funny, clever in its observations and characters.... ― Bulletin of the Center for Children's Books (starred review)

Many teens will feel a haunting familiarity about this future universe. ― Booklist

In spite of its foreboding overtones, FEED is in a sense an optimistic novel. By involving its readers in the act it suggests is central to society's survival, the book offers hope. ― Riverbank Review

Although set in the future, Anderson's novel is a stunning indictment of contemporary America and its ever-increasing obsession with consumerism even in the face of impending environmental collapse . . . the novel is both intense and grim. It should, however, appeal strongly to mature and thoughtful readers who care about the future of their world. ― VOYA

Disturbing yet wickedly funny, with as brilliant a use of decayed language as Russell Hoban's post-apocalyptic RIDDLEY WALKER. ― Horn Book Fanfare, The

This dystopic vision is dark but quite believable. Sad and strong and scary. ― Chicago Tribune

This wickedly funny and thought-provoking novel is written in a slang so hip it is spoken only by the characters in this book. Teens will want to read it at least twice. ― Miami Herald

A darkly comic satire that can be read as a promise or a warning. ― Detroit Free Press

The flashes of humor as well as the cleverly imagined grim future world should quickly draw readers into this look at teenage love and loss, and at consumerism carried to its logical extreme. ― Kliatt Book Review

The scariest part of FEED's brilliantly conceived futuristic dystopia is that much of it isn't futuristic . . . To list all the prescient details in this novel would require taking something from nearly every page. ― Riverbank Review

Frightening in its realistic depiction of what is possible in a culture addicted to information, this novel is a guaranteed conversation-starter. ― Publishers Weekly Best Children's Books of the Year

It's exhilarating to decipher Anderson's futuristic adolescent slang, but his story is a serious one. He has an uncanny gift for depicting how teenagers see the world. ― BookPage

This language sets a perfect tone for the story of a teenage boy growing up in a frighteningly futuristic world . . . The scariest thing of all is its unnerving plausibility. ― Raleigh News and Observer

Surely one of the most prescient novels of last 20 years. ― Lev Grossman

As with the best futuristic fiction, it's scary how little needs to be exaggerated. ― Newsday

The novel is chilling in the way only a well crafted and darkly writ satire can be. ― DigBoston.com

M T. Anderson has worked as a DJ, music reviewer and an editorial assistant at a children's publisher before becoming a writer and teacher of creative writing. He is an author of books for children and young adults. His picture books include, "Handel Who Knew What He Liked", "Strange Mr. Satie", "The Serpent Came to Gloucester" and "Me, All Alone, at the End of the World". His young adult books include, "Thirsty", "Burger Wuss", the dystopian novel "Feed", "The Game of Sunken Places" and also "Whales on Stilts: M.T. Anderson’s Thrilling Tales" and its sequel "The Clue of the Linoleum Lederhosen". His books are highly acclaimed and he has won several awards including, The Michael L. Printz Honor Book for literary excellence in young adult literature (given by the Young Adult Library Services Association) 2007, and the National Book Award for Young People, for "The Astonishing Life of Octavian Nothing, Volume 1: The Pox Party". "Feed" was named a 2002 Los Angeles Times Book Prize Winner, a 2003 Boston Globe-Horn Book Award Honor Book, and a finalist for the 2002 National Book Award and "Handel Who Knew What He Liked" was a 2002 Boston Globe-Horn Book Award Honor Book. He lives in Cambridge, Massachusetts.
Start reading Feed on your Kindle in under a minute.

4.3 out of 5 stars
4.3 out of 5
1,002 global ratings
How are ratings calculated?
To calculate the overall star rating and percentage breakdown by star, we don’t use a simple average. Instead, our system considers things like how recent a review is and if the reviewer bought the item on Amazon. It also analyses reviews to verify trustworthiness.

Aaron Peeters
5.0 out of 5 stars Wow!
Reviewed in Australia on 9 September 2020
Verified Purchase
A prescient tale of the strings attached to our consumerist lifestyle and where it might lead. It certainly has made me reflect on the growing role that technology plays, or the role I want/don't want it to play, in my life. Highly recommend.
Read more
Helpful
Report abuse

Mel
5.0 out of 5 stars Thoughtful view in the future
Reviewed in Australia on 18 October 2015
Verified Purchase
Liked the disintegration of ourselves as reflected in the language. A modern 'Brave New World' and a poignant cautionary tale.
Read more
Helpful
Report abuse
See all reviews

Arlo Marlon
5.0 out of 5 stars Underrated, brilliant YA-crossover novel
Reviewed in the United Kingdom on 3 May 2017
Verified Purchase
Great book. I heard about this through a friend, and after reading it feel it's one of those great books that didn't get as much recognition as it deserves. The opening pages are some of my favorite to any book: we are immediately thrust into the narrator's strange world via his strong voice and use of dialect/neologisms that work to cement the strange dystopic future setting of the novel. Probably described as YA for the novel's voice and adolescent narrator, like all good YA books it transcends the YA genre and explores many interesting and broad-reaching themes.

Published in 2002, when the internet was yet to invade every corner of our lives as it does today, this book truly felt visionary and premonitory, particularly with it's prediction of how advertising would track our every movements and filter into all aspects of our lives. A brilliant read, not without flaws, but any flaws the book may contain did not bother me in face of the great strength and force that the novel delivered.

Amazon customer
5.0 out of 5 stars Interesting read
Reviewed in the United Kingdom on 7 August 2020
Verified Purchase
Great book. Quite a difficult read for a YA - invented words, poetic propaganda and complex storytelling. The main characters are very dynamic if sometimes numbed and apathetic due to external influx of neverending ads. Original and refreshing read.👍
Read more
Report abuse

J
4.0 out of 5 stars A good warning of a possible consumerist and technological dystopia
Reviewed in the United Kingdom on 16 May 2014
Verified Purchase
Feed is written in the narrative of late teens in a world dominated by technology. A world were access to the internet is on the Feed, implanted in you're brain making you constantly connected to the virtual world.

A plausible future if consumerism and technology were to go on to dominate are lives even further. And capitalism was to be very unregulated. It is a dystopia so paints a very pessimistic of our future, I would like to think it would not come to this but I must say I would not be too surprised if the future was as Anderson paints it.

Despite liking the themes, and even the story line is good, but sad. It is written in future speak, and from the narrative of late teens. This limits the brilliance of the writing, it is pretty basic, but I understand that is the point.

Overall a very good book. If you liked; We, 1984 or Brave New World. I doubt you would regret buying it. 4/5
Read more
One person found this helpful
Report abuse

L.N.Styles
5.0 out of 5 stars A flow of consciousness from the future
Reviewed in the United Kingdom on 3 December 2018
Verified Purchase
As I began to read I was transported into the dense yet insightful mind of an American boy in the future. Considering it was written in 2001 it is scarily accurate in describing where the Internet is heading.
Read more
Report abuse

Fviajero
5.0 out of 5 stars My 13 year old son loves it
Reviewed in the United Kingdom on 20 March 2017
Verified Purchase
My 13 year old son loves it. He keeps insisting that I must read it as well (I will, I promised him).
Read more
Report abuse
See all reviews
Back to top
Get to Know Us
Make Money with Us
Let Us Help You
And don't forget:
© 1996-2021, Amazon.com, Inc. or its affiliates