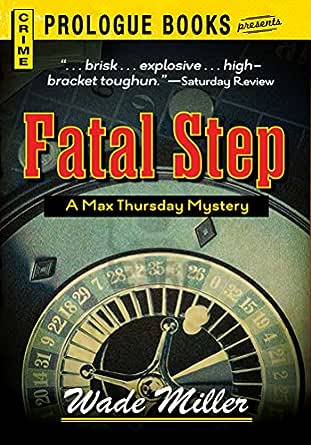 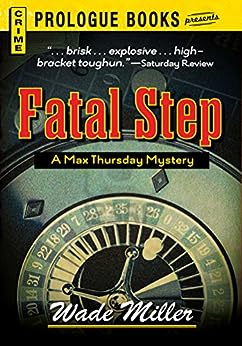 Christopher (o.d.c.)
4.0 out of 5 stars The dark side of Joyland
Reviewed in the United States on 3 December 2014
Verified Purchase
Publication date: 1948

The second Max Thursday novel. I skipped the first,
Guilty Bystander , because it sounded a little too "tough-tender," but Fatal Step is primo noir.

The setting is San Diego, and a rather dark and joyless amusement park called Joyland. When a Chinese boy who works there is murdered, his father asks Thursday to clear the boy's name:

"A murder investigation is no job for a private detective, Mr. Lee, no matter what the movies say. That's what guys like Clapp are for and he'll do a good job."

Immediately, he sensed that wasn't enough for the mourning stony face. His inept voice tried to explain. "[...]I'm not the right guy for this case, Mr. Lee. Put it down to personal reasons, but I don't dare get mixed up in a murder case again. It might be the last time all over -- "

The strange ways of the Orient are the corniest part of the book, and are not overplayed. For the most part, the gangsters, cops, and the brassy female reporter are all quite fresh and economically sketched. The dialogue in particular is snappy enough that I wonder if "Wade" and "Miller" collaborated by writing line for line:

"I'm afraid my job always manages to come first. That Manila pearl case that I rummaged out of the files for a slack weekend -- my retelling that story hit you hard, didn't it? Why?"
"You painted that case as a glamorous cloak-and-dagger affair. You painted me as a sort of ruthless superman, cracking an exotic conspiracy with brains, brawn and bullets. That story belongs in the funny papers, not the feature section."
"Thursday, there's not much difference."

The plot picks up nicely around half-way, and the (literally) thickening atmosphere is well conveyed. There is a nighttime chase along the Pacific Coast Highway that reminded me of early Ross MacDonald.
Read more
3 people found this helpful
Report abuse

wndjmr
4.0 out of 5 stars Max Thursday...for any day.
Reviewed in the United States on 14 July 2014
Verified Purchase
Haven't read a Max Thursday book that I haven't liked. Good characters and good stories.
Read more
Report abuse
See all reviews
Back to top
Get to Know Us
Make Money with Us
Let Us Help You
And don't forget:
© 1996-2021, Amazon.com, Inc. or its affiliates