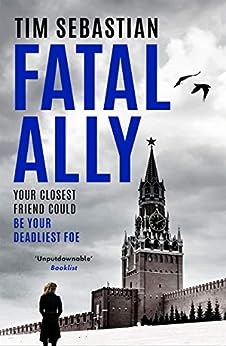 Tim Sebastian is a television journalist, a former BBC Correspondent in Moscow, Washington and Warsaw. He won the BAFTA Richard Dimbleby award in 1981 and Britain's prestigious Royal Television Society Interviewer of the Year award in 2000 and 2001. Memorable interviews with world leaders have included US Presidents Bill Clinton and Jimmy Carter, Archbishop Desmond Tutu, and the last leader of the Soviet Union, Mikhail Gorbachev. He is the author of nine previous thrillers. --This text refers to the paperback edition.

Jennifer
TOP 10 REVIEWER
4.0 out of 5 stars ‘Three teams would do it.’
Reviewed in Australia on 4 September 2019
A British intelligence asset, a former high-ranking KGB agent, makes contact from Moscow. He’s been silent for five years, but now he wants to defect. He claims to have an explosive piece of information. Arrangements are made for him to leave. But the operation fails when details are leaked to the Russians. MI6 operative Margo Lane is outraged, and desperate for revenge. Who betrayed the asset, and why?

A Syrian American woman is in an ISIS occupied part of Syria, leading a team to try to effect regime change. Her mission is dangerous enough, but she will also become a pawn in the struggle between the US, UK and Russian intelligence agencies. Can she survive?

‘All of us are on the side that lets us live a little longer. One day this one, tomorrow the other.’

This is a tense and unsettling spy novel. The various intelligence agencies act as gods, as does a very senior member of the US Administration: operatives and others become disposable pawns in their hubristic quest for dominance. Can anyone be trusted?

The final sections of the novel are set in Syria: full of tension, with some heroic actions taken by ordinary people caught up in an horrific situation.

‘Life should always end quickly. Only the jolt of finality made it bearable.’

I enjoyed this novel. There were quite a number of different characters involved. While this served to demonstrate a larger number of perspectives, it did slow me down a little and sometimes reduced the tension. I’ve not read any of Tim Sebastian’s earlier books: I’ll add them to my reading list.

Note: My thanks to NetGalley and Severn House for providing me with a free electronic copy of this book for review purposes.

Steele Curry
5.0 out of 5 stars Betrayal Writ Large
Reviewed in the United Kingdom on 1 July 2019
Verified Purchase
It’s been some 22 years since Sebastian’s last novel. To say that the wait has been well worth it is a considerable understatement. Fatal Ally is a powerful shot to the gut. Not a word wasted. World weary but wise. Unfortunately, not much grounds for optimism about the future.

Strong-willed principled women. Arrogant amoral men. The hopeless futility of the Middle East. The utter wanton destruction of Syria. The total breakdown of anything resembling civilized behavior in Russia. The betrayal of allies without accountability. All this in only 236 pages of diamond-edged prose. A remarkable achievement that few of today’s thriller writers could equal.
Read more
3 people found this helpful
Report abuse

R.Saunders
5.0 out of 5 stars Sebastian is a real pro
Reviewed in the United Kingdom on 30 October 2020
Verified Purchase
Sebastian's espionage novels are up there with the best an this didn't disappoint. Stylish, wonderful characterisation, authenticity and suspense. marvellous!
Read more
Report abuse

VN
5.0 out of 5 stars Captivating read
Reviewed in the United States on 27 July 2020
Verified Purchase
As always, with Tim Sebastian, you get a feeling of being places, recognizing characters and thinking “I knew it but didn’t want to say out loud”. He doesn’t do lopsided heroes, his actors are as complex as their lives. Still feel like I’ve got Syrian sand covering my face.
Read more
Report abuse
See all reviews
Back to top
Get to Know Us
Make Money with Us
Let Us Help You
And don't forget:
© 1996-2021, Amazon.com, Inc. or its affiliates