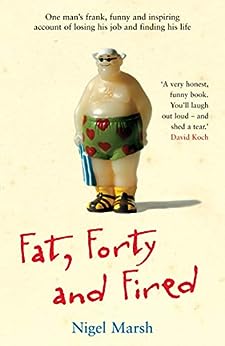 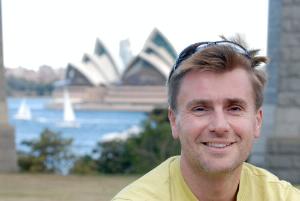 A frank and funny memoir about one man's story of escaping the rat race and finding his life. --This text refers to the paperback edition.

Nigel Marsh was born in Plymouth. Five years later he was sent to boarding school. He has spent the 35 years since thinking of ways of gaining attention and affirmation of his parents. The CEO of communications group Leo Burnett Australia, he lives in Bronte with his wife and four children. --This text refers to the paperback edition.

4.1 out of 5 stars
4.1 out of 5
90 global ratings
How are ratings calculated?
To calculate the overall star rating and percentage breakdown by star, we don’t use a simple average. Instead, our system considers things like how recent a review is and if the reviewer bought the item on Amazon. It also analyses reviews to verify trustworthiness.

Blue Lake Boy
3.0 out of 5 stars Different strokes
Reviewed in Australia on 31 May 2015
"This year, the wheels of the bus would have to continue its journey with an empty seat on it"
Nigel Marsh is clearly a man who swims against the tide. He admits that he is "a serial spurner of what was expected of me. As she [his wife] put it, you always do the opposite of what people recommend to prove some point." So it is no surprise that when this transplanted Brit loses his high-powered job at a Sydney advertising agency the last thing he wants to do is jump straight back on the corporate hamster wheel, instead deciding to take a year off in an effort to reconnect with his family and perhaps find a new purpose and meaning in life.
Of course, it helps that he has a nice fat money cushion on which he can sit out the year. I can understand those reviews who have criticized this book for adopting a flippant tone to the idea of time out for a man who still lives in an expensive beachside suburb of Sydney, where he sips lattes while driving his Subaru and bemoaning the fact that downsizing will mean letting go of the nannies who look after his four kids. But to be fair, Marsh never pretends that he is poor and openly acknowledges what a privileged position he occupies in society, largely through dint of his hard work it must be said. And while he does sometimes come across as irritating, he is rarely pretentious; Marsh appears to have come from a fairly humble background and has a healthy attitude towards the hyper-wealthy of society, some of whom he meets while at an extravagant Venetian wedding that during a European holiday that forms a large section of the book.
Fat, Forty and Fired is funny, frank and fearless, full of colourful language and anecdotes that lay bare the inner workings of his family and way of thinking. It is surprisingly touching at times too, as Marsh opens up about his battles with alcoholism, religious searching and inner doubts about his ability as a father and husband. Mostly though, the book is played for laughs and these come thick and fast throughout. Marsh knows how to tell a good joke against himself, in the same wry, self-deprecating way as a Bill Bryson or Clive James, and while the writing is certainly not in same league as these writers, Marsh does display a good sense of timing and delivery, perhaps a legacy of his days as a stand-up comedian, one of many varied jobs on his CV.
At times the narrative meanders into some dead-ends, for example after writing about it extensively and making it a central part of the story, his attempt to swim from Bondi to Bronte sinks virtually without mention and the book might have benefited from some photos too showing his transformation in weight from the beginning to the end of the year.
Ultimately though, this is not a deep book about the meaning of life and nor will it probably transform anyone else's. At the end of his year off, Marsh happily returns to corporate life, joining the same ad agency of Todd Sampson of TV's Gruen fame. But there is little surprising about this. We all have to do something in life and with a family to support his options were probably limited. At least Nigel Marsh had a chance to hit the pause button for a while, reflect on and try to make himself and the lives of those he loves better. That big wheel just keeps on turning, as always, but maybe now Marsh knows better which direction it is going. We should all be so fortunate.

Maddy G
2.0 out of 5 stars Easy read - more a tale of adjustment than life changing hardship
Reviewed in the United Kingdom on 14 April 2019
Verified Purchase
This was a pleasant tale, but not quite what I expected. He didn't lose his job but more elected to take a year off. They were fortunately well off and had savings to live on and maintain a comfortable lifestyle. It wasn't a story of coping with adversity, more of adjusting to stay in some cheaper hotels whilst on holiday and doing more around the house. The family were likeable and it was an easy read.
Read more
One person found this helpful
Report abuse

PCS
4.0 out of 5 stars An enjoyable read
Reviewed in the United Kingdom on 27 October 2020
Verified Purchase
I enjoyed reading this book - if you're looking for a guide to personal development then this isn't one, but there are certainly lessons you can take from the experiences he talks about. The tone and story are fun and entertaining, but you also get a sense of the bigger picture and deeper lessons that ultimately drove the actions he took. Recommend this book and also suggest watching his TED talk on work / life balance.
Read more
Report abuse

Ms
5.0 out of 5 stars V enjoyable
Reviewed in the United Kingdom on 4 August 2018
Verified Purchase
I really enjoyed this book. I read it in one sitting. I found it to be very funny and honest. Really resonated with me and gave me a few things to think about in the run up to 40
Read more
Report abuse

Romany
3.0 out of 5 stars Funny and pertinent at times
Reviewed in the United Kingdom on 24 April 2016
Verified Purchase
I am teacher and mother of 3 young children. I say Nigel's TED Talk about work/home life balance which really hit the spot. I desperately want to have more time for my family and be less consumed by work. This book is worth a read-some funny moments and it touches all areas of being human. The final wine gum analogy is apt...I have handed in my notice since.
Read more
One person found this helpful
Report abuse

Janette Bailey
3.0 out of 5 stars Fair condition and good delivery time
Reviewed in the United Kingdom on 1 January 2014
Verified Purchase
I did not realise that it would be an ex library book with a stamp in it and very slightly dog eared. For personal use this would have been fine but it was a present so I was slightly disappointed. Never mind - the description note which came with it was accurate but I did not know this beforehand - maybe I missed some information?
Read more
Report abuse
See all reviews
Back to top
Get to Know Us
Make Money with Us
Let Us Help You
And don't forget:
© 1996-2021, Amazon.com, Inc. or its affiliates