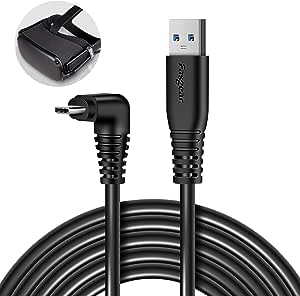 Ian
5.0 out of 5 stars confirmed works as quest link
Reviewed in Australia on 5 October 2020
Length: 3m (10ft)Verified Purchase
It works well for quest link - nil issues in getting it running. Solid cable, and the self adhesive cable ties that come with it are a nice addition. Am using it for sim racing in seated position, so overall very happy but could imagine it would be too short for standing games. Having no issues with lag on Dirt rally, Assetto Corsa, or Project cars
Read more
3 people found this helpful
Helpful
Report abuse

Amazon Customer
3.0 out of 5 stars Meh
Reviewed in Australia on 23 October 2020
Length: 5m (16.5ft)Verified Purchase
Works fine but it doesn't actually support 3A. Have attempted to test this by using a type a to C adaptor to overcome the .9A limit of USB 3.0 type a ports so I could use this with the oculus quest to charge and play. However this does not Work. If you want to use the cord for this purpose, don't buy and look elsewhere
Read more
3 people found this helpful
Helpful
Report abuse

Peter
3.0 out of 5 stars Doesn't recognise some usb3 gen1 ports as usb3, but it works
Reviewed in Australia on 9 December 2020
Length: 5m (16.5ft)Verified Purchase
The type c plug is really tight trying to plug it into the headset, too stiff, I don't like how much pressure needs to be applied to put it into the socket. Whereas the charging cable that comes with the quest 2 slips in easy but still firm.

Also I think the right angle plug is the wrong orientation, It would make more sense if it bent towards the back of the head, rather then bending down to the ground, as the cable ends up getting in the way, and you end up putting the cable over the shoulder down the back anyway, which means you end up having to bend the cable somewhat on an angle anyway.

Cable works but the occulus software only detects usb2 on certain usb3 gen 1 ports.
I had to plug it into my docking station where I found a port it recognized as usb 3 and got speeds of 2.2Gbps, was able to play half life Alyx on rtx 2060 laptop smoothly.

Not possible though if it detects it as usb2, apparently the official cables don't have this problem, but they are lot more expensive. Occulus site mentions they tested Anker and partylink cables ok, Anker cables are sold out atm.

But asides that, it works, am waiting on an adapter that will hopefully allow me to use this cable on my USB3.1 Gen2 type c ports, because I want to be able to take the laptop to a larger space without having to drag along my docking station with it just to be able to connect this cable.

Thought of returning it, but I am living with it for now

**** Update 18/12/2020***
I purchased a "TERSELY USB C to USB Adapter OTG Cable, Type C to USB-A 3.1 Female Connector for Samsung Galaxy" and connected it to my type C port on laptop, and then connected the fasgear cable.
Now it is properly detected by the oculus software as USB and test speed come out at 2.5Gbps.

So if you have bought the fasgear cable and having trouble getting it identifying USB 3 ports, and have an available type C port, then I can recommend the "TERSELY USB C to USB Adapter OTG Cable, Type C to USB-A 3.1 Female Connector for Samsung Galaxy" to solve the issue, rather then trying to return the cable and buy a different one.

1. Before buying check if your motherboard has 3.0 outlets.
2. Length may not be enough for you.
3. Built quality is very sturdy and you will potentially need a counterweight to balance the front.
Read more

Hayden Hedges
4.0 out of 5 stars Decent cable, usb c connection and transfer speed.
Reviewed in Australia on 18 December 2020
Length: 5m (16.5ft)Verified Purchase
The fasgear 5m USB 3.1 Gen 1 AKA 3.0 works in the 3.1 USB Type A port of my computer with a speed of 2gbps(due to the length and type of the cable, speeds will not be anywhere near 5gbps) using the oculus speed test.

The usb c securely clicks into the headset so it feels like it wont come out easily and the cord seems quite sturdy and it's flexible enough.

Can't say much yet for its durability for use in vr...hopefully it lasts for a year at least aha.
Read more
Helpful
Report abuse

Kitty
5.0 out of 5 stars Works excellent with oculus quest
Reviewed in Australia on 25 September 2020
Length: 5m (16.5ft)Verified Purchase
I like this cable. I bought it for my oculus quest and I don't have a USB type c port on my PC. It's a life saver. It allowed me to turn my quest into a link. It also is the best option as you can velcro it close to the headset because of the angle of the plug. 10/10 would recommend. It also got here in a couple of days. That's unheard of. I'm an Amazon convert now. This was my first purchase. I'm so happy!
Read more
One person found this helpful
Helpful
Report abuse

Julian Vreug
2.0 out of 5 stars Nice cable but unfortunatly is worse than USB 2.0 for me
Reviewed in Australia on 13 January 2021
Length: 3m (10ft)Verified Purchase
The cable is actually quite nice, fits well a bit of thought has gone into making it including providing clearance for the head band, Yet no matter what I can not get USB3.0 I have put it in powered ports and boosted power, USB3.2 ports yet it says everytime the cable is USB 2.0. I have another cable which ain't ideal which I get 1.8gb/s with this cable I only get 9MBPS! The result, it works but the bandwidth is so slow it makes VR unusable. It may just be my cable, so question quality control.
Read more

Mallrat
5.0 out of 5 stars It works!
Reviewed in Australia on 20 July 2020
Length: 5m (16.5ft)Verified Purchase
Recognized immediately by the Oculus app and works perfectly. Was meant to be a stop-gap while I wait on the official cable, but I really shouldn't have bothered with the expense of that one. This works fine.
Read more
Helpful
Report abuse
See all reviews

Amazon Customer
1.0 out of 5 stars Didn't work for me as USB-3 for a Oculus Quest 2 VR Headset
Reviewed in the United Kingdom on 25 November 2020
Length: 5m (16.5ft)Verified Purchase
Poor quality item with a USB-C plug that didn't seem to fit all the way in on the headset. I was not willing to force it as this would likely mangle the headset socket. Oculus setup reported connectivity but only as USB-2, which is not as advertised. I returned this one for a refund. I purchased an alternative, noticeably more expensive, but at least it worked.
Read more
2 people found this helpful
Report abuse

Warren
5.0 out of 5 stars Read description carefully. This REQUIRES USB 3.1.
Reviewed in the United Kingdom on 14 September 2020
Length: 5m (16.5ft)Verified Purchase
I made the mistake of not checking my PC USB ports when I purchased this. I only have USB 3.0 on my motherboard and had black screen crashes trying to load Oculus Link. I was worried that it was the cable, but the description says USB 3.1. Trying this on a capable PC it worked perfectly. You need to check your motherboard has USB 3.1 ports.
Read more
3 people found this helpful
Report abuse

Neil S.
5.0 out of 5 stars A substantial cable that provides a good 1.9Gb/s for my Oculus Quest link
Reviewed in the United Kingdom on 13 August 2020
Length: 5m (16.5ft)Verified Purchase
It is quite a thick cable but makes you feel it will last and last. The 90 degree bend on the visor end is great and with the velcro like ties provided to hold it securely to the visor head strap, you can be much more sure the socket on it will not be stressed. 1.9Gb/s was shown by using the Oculus Link software test feature. Cable that came with the Quest delivered something around 350-450Mb/s by comparison I think.
Read more
Report abuse

Matthew
2.0 out of 5 stars Shows as USB2 not 3
Reviewed in the United Kingdom on 5 September 2020
Length: 5m (16.5ft)Verified Purchase
So this cable worked well the 1st day I got it but has gotten worse with in the 3 days of having it.. also only shows up as a USB 2 and not 3 as advertised. also the 1st night I left it all plugged up and it charged my Quest fine. Last night how ever it didn't charge it at all. And is having issues on being even picked up.

Though i will say the velcro cable ties are very good..
Read more
Report abuse

Vin
2.0 out of 5 stars Not USB 3 or 3.1 - Signal Degradation is noticeable
Reviewed in the United Kingdom on 27 November 2020
Length: 5m (16.5ft)Verified Purchase
For the general audience this cable may be sufficient, but it is USB 2. Don't buy this expecting a USB 3.1 cable as it is advertised! It just about does the job but the signal degradation after 3 metered is noticeable through stuttering and input delay during intensive scenes. Doesn't output enough power to charge the quest even if you use a USB 3 port from your pc, and to truly achieve USB you'd need a signal repeater after 3 metered anyway.
Read more
Report abuse
See all reviews
Get FREE delivery with Amazon Prime
Prime members enjoy FREE Delivery and exclusive access to movies, TV shows, music, Kindle e-books, Twitch Prime, and more.
> Get Started
Back to top
Get to Know Us
Make Money with Us
Let Us Help You
And don't forget:
© 1996-2020, Amazon.com, Inc. or its affiliates