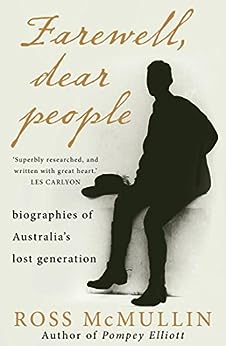 by Ross McMullin (Author) Format: Kindle Edition
See all formats and editions
Sorry, there was a problem loading this page. Try again.

WINNER OF THE 2013 PRIME MINISTER'S LITERARY AWARD FOR AUSTRALIAN HISTORY

COMMENDED FOR THE FAW EXCELLENCE IN NON-FICTION AWARD

For Australia, a new nation with a relatively small population, the death of 60,000 soldiers during World War I was catastrophic. It is hardly surprising, then, that Australians evaluating the consequences of the conflict have tended to focus primarily on the numbing number of losses — on the sheer quantity of all those countrymen who did not return.

That there must have been extraordinary individuals among them has been implicitly understood, but these special Australians are unknown today. This book seeks to retrieve their stories and to fill the gaps in our collective memory. Farewell, Dear People contains ten extended biographies of young men who exemplified Australia’s gifted lost generation of World War I.

Among them are accounts of an internationally acclaimed medical researcher; a military officer described by his brigadier as potentially an Australian Kitchener; a rugby international who became an esteemed administrator and a rising Labor star; an engineer who excelled on Mawson’s Antarctic mission; a visionary vigneron and community leader who was renowned for successful winemaking at an unusually young age; a Western Australian Rhodes scholar assured of a shining future in the law and/or politics; a Tasmanian footballer who dazzled at the highest level; and a budding architect from Melbourne’s best-known creative dynasty who combined an endearing personality with his family’s flair for writing and drawing.

This magisterial book tells their stories for the first time. In doing so, it enriches the story of Australia immeasurably.

‘A remarkably good book … Farewell Dear People has elevated the study of Australian involvement in the Great War to a new dimension in courage, commitment and sacrifice.’ The Spectator

‘There is so much to admire and to praise in this book. The research is prodigious, the storytelling hypnotic, the confidence and clarity of the writer remarkable. Do not for a second think of this book as military history only or mostly … This is a rich book, to be sure. One that I read with such pleasure and admiration. It is a wonderful tribute to the 10 men whose lives we discover for the first time, an extraordinary account of Australia from about the 1870s and into the 1930s, and deeply moving.’ The Canberra Times

"This is the work of a real historian who has gotten his hands dirty doing real work...a powerful and valuable book."
--Craig Stockings, Australian Historical Studies

"There is so much to admire and to praise in this book. The research is prodigious, the storytelling hypnotic, the confidence and clarity of the writer remarkable. Do not for a second think of this book as military history only or mostly...This is a rich book, to be sure. One that I read with such pleasure and admiration. It is a wonderful tribute to the 10 men whose lives we discover for the first time, an extraordinary account of Australia from about the 1870s and into the 1930s, and deeply moving."
--Michael McKernan, Canberra Times

"McMullin has set a new standard in Australian military biographical, for which he must be congratulated. Very highly recommended."
--Ron Austin, Mufti

"A remarkably good book...Farewell Dear People has elevated the study of Australian involvement in the Great War to a new dimension in courage, commitment and sacrifice."
--Stephen Loosley, The Spectator

"Farewell, Dear People is a powerful revelation of the lasting cost of the Great War--a deeply felt engagement with lost lives, and a superb union of research and writing."
--Peter Stanley, author of Men of Mont St Quentin

Ross McMullin is a historian and biographer whose main interests are Australian history, politics and sport. He has researched and written extensively about the impact on Australia of its involvement in World War I. His books include the ALP centenary history The Light on the Hill- The Australian Labor Party 1891 - 1991, the award-winning biography Pompey Elliott, and So Monstrous a Travesty- Chris Watson and the World's First National Labour Government. He has also contributed chapters to many other books. --This text refers to the paperback edition.

Julie Nelson
5.0 out of 5 stars A wonderful tribute to the extraordinary potential lost in war
Reviewed in Australia on 5 September 2014
Verified Purchase
I was amazed by the author's capacity to draw me into the lives of these people who I had never heard of, and didn't think I cared about. But, their stories were told in such a personal way that I understood them, their reasons for going and their hopes for the future. I felt sad for their loss, for their friends, families and communities. I felt angry about the waste of lives and the futility of war.
This is an amazing work in collecting family histories, official records, personal diaries and letters, local history and context, and weaving it all together into very connected and readable stories. The extent of the bibliography shows the enormity of the work.
Read more
Helpful
Report abuse
See all reviews

Dave Campbell
4.0 out of 5 stars Complex style of composition, very detailed, very interesting ...
Reviewed in the United States on 14 August 2015
Verified Purchase
Complex style of composition, very detailed, very interesting to read. This is a book that does not allow you to read a small section at will but rather requires that the reader devote more time to read greater content each time it is picked up. Failure to do so and the reader looses touch with what the author was attempting to show.
Read more
Report abuse

Helen Gentle
5.0 out of 5 stars Heartbreaking
Reviewed in the United States on 18 April 2013
Verified Purchase
Farewell Dear People is a life changing experience. Ross McMullin has obviously researched his work thoroughly and draws it together very sensitively. We all know the horrific toll that WW1 elicited from Australia's youth, but this book tells the personal stories and draws a vivid picture of the skilled and talented young men we lost. Australia missed a whole generation by losing these fine young men.
Thank you, Ross.
Read more
2 people found this helpful
Report abuse

Richard
4.0 out of 5 stars Important for the story to be told
Reviewed in the United States on 22 June 2014
Verified Purchase
This is a moving and sad account of 10 wasted lives, cut short by WW1. It brought home the terrible waste of promising young men, the effect on their families, and the lack of good leadership shown by the generals. We learn a lot about the social conditions of the time, and about the importance of Empire in those days. The book needed a good editor as much of the detail was superfluous, but this is a story which needed to be told.
Read more
One person found this helpful
Report abuse
See all reviews
Report an issue
Does this item contain inappropriate content?
Report
Do you believe that this item violates a copyright?
Report
Does this item contain quality or formatting issues?
Report