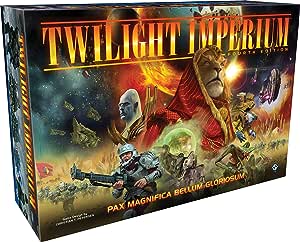 For two decades, Twilight Imperium has thrilled gamers with its grand story telling and tactical strategy. Now players can explore the next step in the Twilight Imperium legacy with Twilight Imperium Fourth Edition, an epic game of galactic conquest for three to six players. Each player takes command of one of seventeen unique civilizations to compete for interstellar supremacy through warfare, trade, uncertain allegiances, and political dominance. Every faction offers a completely different play experience, from the wormhole-hopping Ghosts of Creuss to the Emiratates of Hacan, the masters of trade. All of these races have many paths to victory, but only one will sit upon the throne of Mecatol Rex as the new masters of the galaxy.

The Classic Game of Galactic Conquest.

A Galaxy at War

Mecatol Rex. The center of the known galaxy and seat of the former Lazax Empire. Scarred by the flames of betrayal, Rex is a specter of a fallen empire and of ages long forgotten, yet it remains an object of reverence—and desire—in a galaxy of conflict and uncertainty.

Once, the great city that spanned its surface was the pinnacle of civilization. Today, Mecatol City is naught but a blasted shell of its former glory, a grim respite in the toxic Sea of Desolation that covers the majority of the planet.

Even so, its parabolic history of decadence and destruction does little to deter those who would seek to harness its power. The Winaaran custodians who dwell within the remnants of the city maintain what is left of the former capital, waiting for one of the Great Races to step forward and take up the mantle of the former Emperors.

Twilight Imperium's epic and engaging gameplay has enthralled players all over the world. Now, new players have the opportunity to dive into the modern classic with the most refined version of the game ever released.

Players will attempt to score victory points by completing both public and individual secret objectives that will see each of their factions maneuvering ships around an expansive and diverse galaxy, trading goods and commodities for favors and promises, claiming planets for their resources and influence, and politically maneuvering their way to glory. The first faction to ten victory points wins the game, but this is easier said than done.

4.9 out of 5 stars
4.9 out of 5
363 global ratings
How are ratings calculated?
To calculate the overall star rating and percentage breakdown by star, we don’t use a simple average. Instead, our system considers things like how recent a review is and if the reviewer bought the item on Amazon. It also analyses reviews to verify trustworthiness.

Simon Smith
5.0 out of 5 stars Epic Space Opera
Reviewed in Australia on 2 August 2019
Verified Purchase
Such an epic game. So much love used in its creation. Not for the faint of heart or casual gamers though. This is a life choice.
Read more
Helpful
Comment Report abuse

James Dice
5.0 out of 5 stars Did not disappoint.
Reviewed in Australia on 20 September 2020
Verified Purchase
First game has been a blast
Read more

Jorge Brantes Ferreira
5.0 out of 5 stars Twilight Imperium ftw
Reviewed in the United Kingdom on 17 March 2018
Verified Purchase
Twilight Imperium is definitely the best board game of all time. I have played more than 60 3rd Edition games and getting the 4th Edition truly was a breath of fresh air, new and streamlined mechanics helped make the game even better.

For anyone who loves a great strategy game, this is it, buy it now and never look back.

Tim
5.0 out of 5 stars The best board game? It might just be...
Reviewed in the United Kingdom on 19 April 2019
Verified Purchase
Superb. It does take 8 hours to play, but somehow never becomes boring. An epic space opera that makes for hilarious, tense, tactical and political games. If you’ve got enough keen friends to play, this is great value for all of the entertainment you’ll get out of it.
Read more
4 people found this helpful
Report abuse

Although expensive and vast I would recommend if you have some spare cash and some equally minded (or patient) friends.

S.G
5.0 out of 5 stars Husband loved it
Reviewed in the United Kingdom on 26 December 2018
Verified Purchase
My husband has played the older version of this with his friends so was very pleased to get the latest one - describes it as Risk in Space. Apparently complicated and takes hours to play but a lot of fun if you like sci fi and strategy games.
Read more
One person found this helpful
Report abuse
See all reviews
Get FREE delivery with Amazon Prime
Prime members enjoy FREE Delivery and exclusive access to movies, TV shows, music, Kindle e-books, Twitch Prime, and more.
> Get Started
Back to top
Get to Know Us
Make Money with Us
Let Us Help You
And don't forget:
© 1996-2020, Amazon.com, Inc. or its affiliates