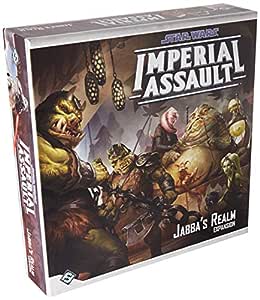 by Fantasy Flight Games
4.8 out of 5 stars 24 ratings
Available from these sellers.

Imperial reprisals have swept the galaxy, targeting not just the Rebels, but their families and loved ones as well. In desperation, you and a team of other Rebel operatives have gathered as many refugees as you can in hopes of shepherding them to safety in the Outer Rim. Your escape is discovered, however, and you've been shot down on Tatooine. Here, the power of the Empire is not as strong as elsewhere but that doesn't mean you're out of danger. This is the domain of Jabba the Hutt and you'll need to play by his rules if you want to survive. Jabbas Realm is a new expansion for Imperial Assault that offers a wealth of new content for your campaigns and skirmishes. Youll find an entirely new full-length campaign that challenges you to survive among the desert wastes and criminal underworld of Tatooine, even as new skirmish missions invite you to battle in the Nal Hutta Borderlands or around the fabled Pit of Carkoon. Eighteen new double-sided map tiles evoke the opening scenes of Return of the Jedi, giving you access for the first time to Jabbas palace, his pleasure barge and iconic locations like the Sarlacc pit. Meanwhile, sixteen brand-new plastic figures offer new warriors and heroes for the Imperials, Rebels and Mercenaries, even as new Command cards, Deployment cards, Agenda cards and Class cards give you countless ways to customize your game. With characters like Jabba the Hutt, the Rancor and Luke Skywalker as a Jedi Knight joining the game, this expansion draws you into the Star Wars saga like never before.

Marc P. Prichard
5.0 out of 5 stars Top-notch campaign that is superior to main game's campaign
4 August 2019 - Published on Amazon.com
Verified Purchase
This campaign and miniatures are excellent. There was far more story/flavor text than in the main campaign that does seem to give a lot of options on how your experience will ultimately play out. The miniatures are very good with the Rancor taking the cake as to this biggest and bada$$ miniature in the game. Tons of iconic moments that do a great job in letting you have a similar experience to Return of the Jedi when Luke, Leia (et all) attempts to rescue Han from Jaba's Palace. Really enjoyed this campaign and it is well-worth the buy in my opinion.
Read more
2 people found this helpful

Alex
5.0 out of 5 stars Time to re-roll the dice.
19 March 2017 - Published on Amazon.com
Verified Purchase
A great expansion to an already great game, it comes with powerful new allies and enemies and a whole lot of stuff for the Mercenary affiliation. The new campaign gives Rebel players the ability to choose between two story missions, instead of the usual one, to play when it's time to play a story mission. This box, just like Return to Hoth, comes with 4-player skirmish missions so if you want more of those then this is your only option.
Read more
11 people found this helpful

Grim Knight
5.0 out of 5 stars Hutt Clans Assault!
15 February 2017 - Published on Amazon.com
Verified Purchase
Imperial Assault: Jabba's Realm is expansion to Imperial Assault Core Game so it is incomplete, however I played it with a friend and I had a blast the minatures are so cool (especially the rancor and the mandalorian). I'm still not a fan of FFG leaving campaign essentional characters (as someone pointed out FFG used to sell games cheaper with more miniatures). I have no problem with the blister packs but seriously enough FFG! Speaking of campaign however it's actully a lot longer than I thought it would be and well written I loved it!
Read more
12 people found this helpful
Go to Amazon.com to see all 9 reviews 5.0 out of 5 stars
Get FREE delivery with Amazon Prime
Prime members enjoy FREE Delivery and exclusive access to movies, TV shows, music, Kindle e-books, Twitch Prime, and more.
> Get Started
Back to top
Get to Know Us
Make Money with Us
Let Us Help You
And don't forget:
© 1996-2020, Amazon.com, Inc. or its affiliates