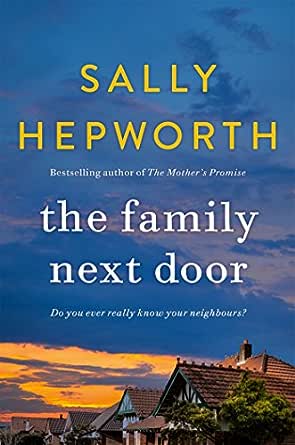 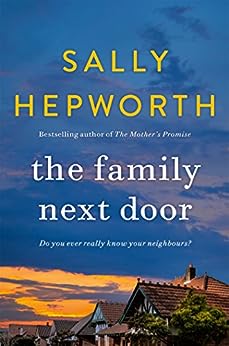 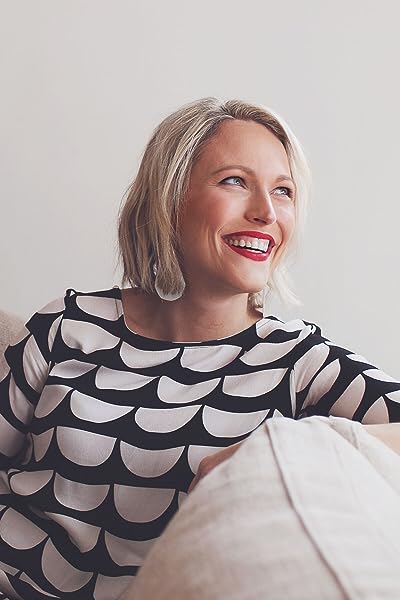 The Family Next Door Kindle Edition

Sally Hepworth has lived around the world, spending extended periods in Singapore, the U.K. and Canada, where she worked in event management and Human Resources. While on maternity leave, Sally finally fulfilled a lifelong dream to write, the result of which was Love Like the French, published in Germany in 2014. While pregnant with her second child, Sally wrote The Secrets of Midwives, published worldwide in English, as well as in France, Italy, Germany, the Czech Republic and Slovakia in 2015. A novel about three generations of midwives, The Secrets of Midwives asks readers what makes a mother and what role biology plays in the making and binding of a family.

The Secrets of Midwives has been labelled "enchanting" by The Herald Sun and "smart and engaging" by Publisher's Weekly and New York Times bestselling authors Liane Moriarty and Emily Giffin have praised Sally's debut English language novel as "women's fiction at its finest" and "totally absorbing".

Sally has continued writing about women's issues and family ties in The Things We Keep (published February 2016), The Mother's Promise (March 2017), The Family Next Door (March 2018) and The Mother-in-Law (February 2019).

Sally lives in Melbourne, Australia with her husband and three children.

No one really knows what goes on behind closed suburban doors. --This text refers to the paperback edition.

Sally Hepworth has lived around the world, spending extended periods in Singapore, the UK and Canada, where she worked in event management and human resources. She is the author of Love Like the French, The Secrets of Midwives, The Things We Keep and The Mother's Promise. Sally lives in Melbourne, Australia, with her husband and children. --This text refers to an alternate kindle_edition edition.
Read more

4.3 out of 5 stars
4.3 out of 5
1,438 global ratings
How are ratings calculated?
To calculate the overall star rating and percentage breakdown by star, we don’t use a simple average. Instead, our system considers things like how recent a review is and if the reviewer bought the item on Amazon. It also analyses reviews to verify trustworthiness.

Miss Prudence
2.0 out of 5 stars Some strange phrases
Reviewed in Australia on 26 July 2018
Verified Purchase
I just couldn’t get past the use of “illegitimate”. This outdated term has not been used for years. So I had a hard time accepting 30 something year old women would be thinking or fearful of having a so called “illegitimate “ child. Just discredited an already soft story. Otherwise I might of seen this as a “no brainer” Moriarty kind of read: easy and ok
Read more
One person found this helpful
Helpful
Report abuse

Edenview
4.0 out of 5 stars Worth the read
Reviewed in Australia on 5 January 2021
Verified Purchase
This book is a great book to read on those rainy days where you really can’t get inspired to do anything else.. I loved Sally Hepworth’s easy style, her reference to Australian places and weather, and her ability to bring the characters to life. The only thing I found a bit hard was trying to remember each character as the focus on each one changed regularly in the book and it was hard to keep up at times. Overall, I really enjoyed it.
Read more
Helpful
Report abuse

Bookappraisal
5.0 out of 5 stars First but NOT the last
Reviewed in Australia on 20 March 2019
Verified Purchase
This is the first Sally Hepworth book I’ve read but not the last. I highly recommend this book. From the start of the book you are challenged with your thinking of what stand you’d make under particular situations. Loved the twists and the outcome of the novel. Do yourself a favour and check this one out.
Read more
Helpful
Report abuse

mel_mox
5.0 out of 5 stars Awesome book with a great twist
Reviewed in Australia on 30 September 2018
Verified Purchase
Loved this book and story.
Sally is a great story teller & gets you emotionally hooked to the characters. Loved all of the characters especially Essie.
The writing style reminded me of Liane Moriarty.
I was so hooked I read it in one day and didn’t want it to end. I will definitely be reading all of her other books now.

Bernadette Dekker
5.0 out of 5 stars Intriguing story
Reviewed in Australia on 25 January 2020
Verified Purchase
Great story with many twists and unexpected turns. Reasonable characterisation. It certainly captured my interest and kept me wondering what would happen next. Highly recommended.
Read more
Helpful
Report abuse

Amazon Customer
4.0 out of 5 stars Good Story
Reviewed in Australia on 17 December 2020
Verified Purchase
I enjoyed the story and the characters were well drawn and believable. I got so annoyed by the Americanisms scattered throughout the book however - it felt like the author was pandering to the American market a bit frankly. It's set in Victoria with Australian characters. Can't we just use Australian terminology?
Read more
Helpful
Report abuse

Susan Godenzi
5.0 out of 5 stars Another exceptional read!
Reviewed in Australia on 9 August 2020
Verified Purchase
So glad to have come across this author’s books. Such good strong characters and believable storyline. Engrossing and thoroughly enjoyable.
Read more
Helpful
Report abuse

pamela hague
1.0 out of 5 stars Not for me
Reviewed in Australia on 7 April 2018
Verified Purchase
Not great.. i didnt realise i would be reading quite so much about crying babies and whining toddlers. It was not a relaxing read
Read more
Helpful
Report abuse
See all reviews

nicknak
3.0 out of 5 stars Neighbours
Reviewed in the United Kingdom on 24 May 2018
Verified Purchase
You never know what goes on behind closed doors! I wouldn't say it's a gripping story as I knew what was coming. It was quite hard to keep up with the amount of characters in this book.
Read more
21 people found this helpful
Report abuse

City Pigeon
1.0 out of 5 stars Most Boring Story Read This Year. "Thriller"? No Way!
Reviewed in the United Kingdom on 16 August 2018
Verified Purchase
I disliked this book from the first page. It is definitely NOT thrilling, nor even entertaining - unless one likes to read about breeding and breastfeeding babies! These topics are covered by the authoress in excruciatingly boring detail and yes, we all know that infants keep one up at night and new mothers are tired... As a woman, I think it's about time women writers such as Ms. Hepworth wrote about something interesting instead of babies!
Read more
14 people found this helpful
Report abuse

Tinkerbell
2.0 out of 5 stars Spoiler Alert - Nothing Happens in this book
Reviewed in the United Kingdom on 5 October 2018
Verified Purchase
Gripping? Really? Nope, not at all. I don't understand the rave reviews for this. It's very dull with boring characters that I couldn't care less about and I kept waiting for something to happen. I finally finished it (after falling asleep each time I picked it up) and still nothing happened. I'm always suspicious when new releases get compared to other authors - you just can't compare this to Liane Moriarty for instance. Only thing in common is it's set in Australia.
I really need to find something good to follow after my struggle with this.

Christine Cooney
4.0 out of 5 stars What secrets are your neighbours keeping behind their closed doors?
Reviewed in the United Kingdom on 12 July 2018
Verified Purchase
I found the continual changing from one main character’s plot line to another’s rather confusing to start with, though once I had got used to this, the narrative flowed quite well. All the female protagonists were well drawn with a strong supporting cast of husbands and other family members. There were a few small surprises along the way, although nothing prepared me for the final revelation. Overall, I enjoyed the book and will look for more books from this author.
Read more
8 people found this helpful
Report abuse

Nichola Ward
5.0 out of 5 stars We all want to know what happens behind closed doors.
Reviewed in the United Kingdom on 25 August 2018
Verified Purchase
Set in Melbourne, life for three mothers on a quiet street seems to carry on as normal until new neighbour Isabelle arrives; with no husband and no child why would she want to live in this expensive, children orientated side of town?

Word gets out and rumours begin to spread about her sudden appearance and ever growing obsession about this woman grows.

Each chapter of this book focusses on a different character which can be confusing at first but once you get into it, you soon get to know each personality and together they form a very pleasant continual read which develops the plot.

We all want to know what happens behind our neighbours door, and this will keep you guessing!

Read more
9 people found this helpful
Report abuse
See all reviews
Get FREE delivery with Amazon Prime
Prime members enjoy FREE Delivery and exclusive access to movies, TV shows, music, Kindle e-books, Twitch Prime, and more.
> Get Started
Back to top
Get to Know Us
Make Money with Us
Let Us Help You
And don't forget:
© 1996-2020, Amazon.com, Inc. or its affiliates