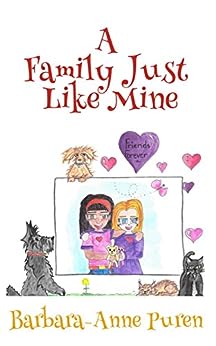 A Family Just Like Mine [Print Replica] Kindle Edition

"A wonderful tale to find that most precious treasure; a heart family. A reminder of the true meaning of family, and the power of love." Susan Hayter. Senior Technical Advisor on the Future of Work Office of the Deputy Director-General of Policy ILO.

"A relevant story, reminding us of the value of family, and that for all our differences, we are all the same. Notably for families with adopted children, it sets a wonderful tone for opening a lifelong dialogue." Grant Knottenbelt, Artist, Owner Contact Marketing.

"A heartfelt, way to explore what "family" means in a globalised world. A great conversation starter for any parent whose child has lamented that s/he wished for a 'normal' family. Tuesday Reitano, mother, Deputy Director, Global Initiative Against Transnational Organized Crime., Co-author Migrant, Refugee, Smuggler, Saviour

Having relocated to Switzerland from South Africa in September 2016 and while dealing with all of the challenges and delights that are faced when moving your entire life to another country, Barbara-Anne came to realise something profound about herself. For the greater part of her 'on stage' professional life, as an actress, singer and saxophonist, she has always thought of herself as a performance artist who writes her own material. In the last year or so, however, she has come to realise that she is rather a writer who performs her own material. She has always expressed herself by writing, from one of her first poems written at 12 years of age as a reaction to seeing the words 'whites only' on a bus stop bench while growing up in apartheid South Africa, to her more recent one-woman musical stage show, Casual Sax, about a 40-something woman navigating the highways and byways of dating in the 21st century. She wrote A Family Just Like Mine for her daughter as a way of explaining to her curious peers why she was lucky enough to have both a 'heart family' and a 'tummy family'. --This text refers to an out of print or unavailable edition of this title.